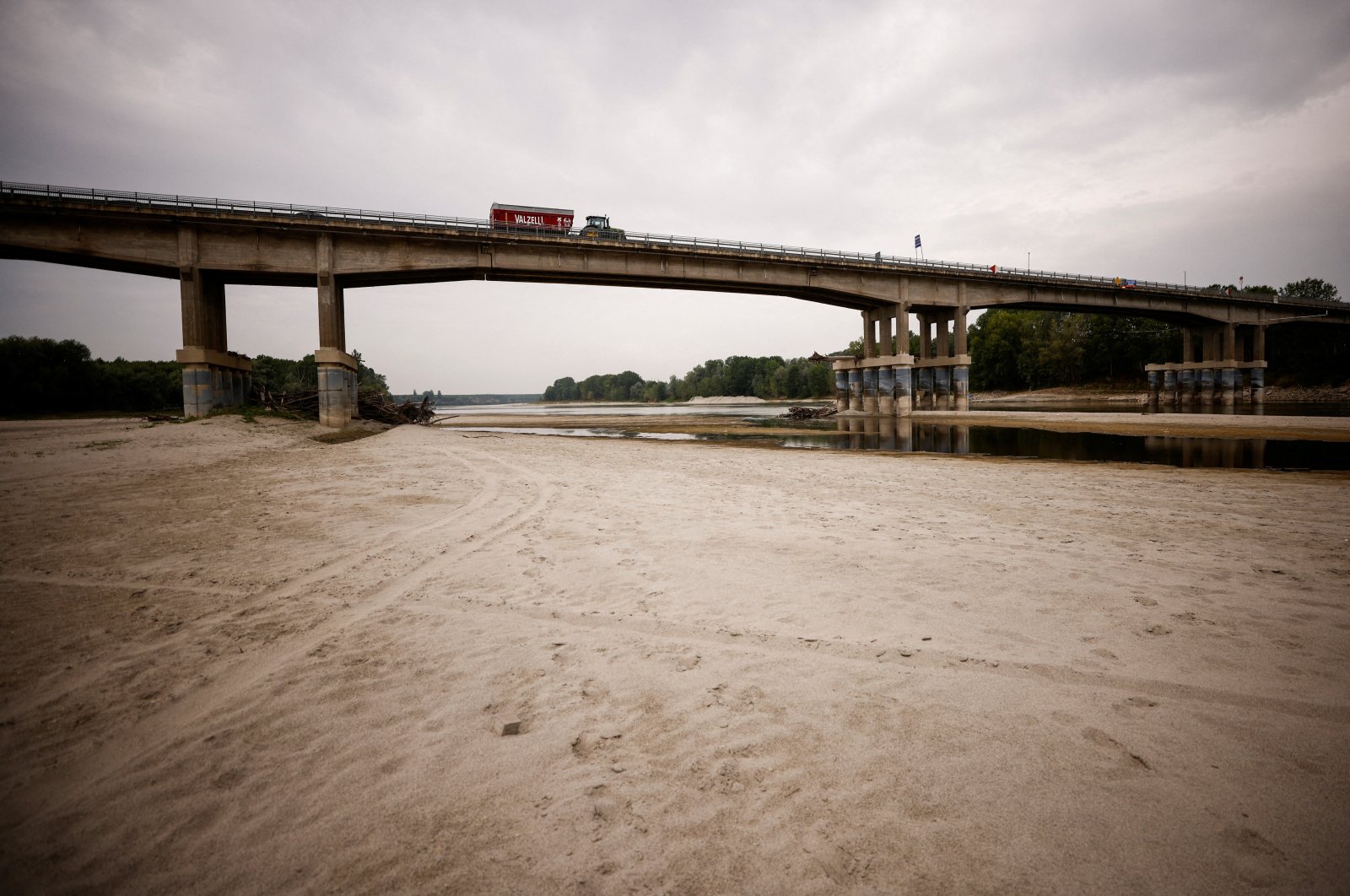 A view shows Po's dry riverbed, as parts of Italy's longest river and largest reservoir of freshwater have dried up due to the worst drought in the last 70 years, Boretto, Italy, June 22, 2022. (Reuters Photo)
by Burcu Çakmak Jul 08, 2022 7:58 am

The U.S. last month announced that water security is a real threat, but it’s not just America that fears the impending doom as climate change aggravates the issue

We are all familiar at this point with the assertation that "water is the new oil," signaling that the vital liquid is the next thing to fight for. If you have been taking such statements lightly, just take a look at what U.S. Vice President Kamala Harris announced recently: water security is now one of the focal points in America's strategy. Harris said that it is clear the United States cannot achieve its foreign policy and national security objectives without global water security, as water security can both contribute to and mitigate these challenges.

So she basically said that the U.S. government will approach the water shortage as a national security issue, for the first time.

The policy shift is part of the Action Plan on Global Water Security released in June by the White House, outlining a whole-of-government effort to achieve a water-secure world. The White House plan, which gives critical importance to protecting water supplies and elevates water security as an “international priority,” is designed to prevent conflict between nations and promote equity and economic growth.

“This action plan will help our country prevent conflict and advance cooperation among nations, increase equity and economic growth, and make our world more inclusive and resilient,” said Harris in a speech in early June.

“As our planet warms and weather patterns change, extreme drought is becoming increasingly common. At this moment, about 90 million Americans are living under drought conditions. And the start of summer is still weeks away,” she added.

The United Nations has defined water security as the ability to access adequate amounts of “acceptable quality water” for sustaining livelihoods, human well-being and socioeconomic development, while also preventing water pollution and water-related disasters as well as preserving ecosystems in a climate of peace and political stability.

With rising temperatures, “there is a growing risk of conflict over water and migration” that could end up “creating additional demands on U.S. diplomatic, economic, humanitarian, and military resources,” DNI said in the report.

“Disputes between countries or communities over limited water resources can, predictably and by extension, over time provoke armed conflict,” she said.

Although “water wars” have not erupted on the scale some leaders envision and the link between water and conflict is not always direct, there is research supporting the idea that water scarcity triggers armed conflicts or at least makes conflict more likely in regions already struggling with other problems. Water scarcity also affects food production and public health, and can lead to mass migration and protests that put pressure on neighboring countries.

Research by the Pacific Institute, a U.S.-based nonprofit that studies issues related to water access and resilience, shows that over the past decade, water has become a more common "trigger" for conflict.

Not just the U.S. is concerned, though.

While the U.S. West is suffering its worst drought in decades, the Horn of Africa has endured severe droughts for years.

The region is living through its worst drought in 40 years. Millions of livestock, families’ source of wealth and nutrition, and people have died because of the drought combined with conflict and complex humanitarian access issues. The U.S. Agency for International Development (USAID) says regional authorities have not seen anything on this scale in well over 100 years.

The UNEP-hosted IRP also says that in sub-Saharan Africa, a region struggling to cope with the impacts of climate change and poverty, water demand is expected to rise by 283% over 2005 levels by 2030.

A fourth straight failed rainy season has exacerbated a biting drought in Somalia and left the country facing food insecurity, malnutrition and famine, multiple U.N. agencies warn. According to the U.N., “the drought could leave 4.6 million people without enough food by May 2022.”

South Africa also is struggling with abnormal heat waves. Water levels in the region are at an all-time low. In June, a South African municipality had imposed six-hour daily water outages, after one of the region's four reservoirs dried up. During the water cuts, the stricken region will rely on boreholes and other underground water sources.

The region has had below-normal rains over the past seven years, a "clear manifestation of climate change," according to the government.

Nations around the world will have to empathize with many African nations who have been suffering from the very same problem for centuries.

This year, Western Europe has had its share of drought. Summer has only just begun, but June’s heat wave is already the earliest on record in western European countries. For the month of July, meteorologists predict that weather patterns may be a little more unstable over northern Europe, while further south, the weather will remain generally dry.

Italy, for example, has been experiencing high summer temperatures with very little rainfall for some time. The river Po – the country's longest – has dried up in places and is registering its lowest levels in more than 70 years.

Representing the peninsula's largest water reservoir, much of which is used by farmers, the Po is Italy's longest river which runs for more than 650 kilometers (400 miles) through the north of the country. However, many stretches of the waterway have run dry and farmers say the flow is so weak that sea water is destroying crops.

Meanwhile, France’s southern half is listed as “likely” to experience drought, according to seasonal predictions. Several departments of the country are already at yellow, orange and red alert levels for drought, classified from light to dark in accordance with the seriousness of the situation, with water restrictions in place.

Due to the air temperature up to 40 degrees Celsius (104 degrees Fahrenheit) in some regions, a red alert was issued in 14 provinces and an orange alert in 56 provinces. The red (vigilance absolute) level is rarely declared for high temperatures, and is a warning that the heat can pose a serious risk to human health.

Italy is in the midst of an early summer heat wave. Early this week, Italy had declared a state of emergency for areas surrounding the river Po, which accounts for roughly a third of the country's agricultural production, amid the worst drought in 70 years.

The Italian government said in a statement that the emergency measures would cover lands that bordered the Po and the water basins of the eastern Alps. More broadly, it also introduced a state of emergency in five northern regions – Emilia-Romagna, Friuli Venezia Giulia, Lombardy, Piedmont and Veneto – earmarking an initial 36.5 million euros ($38 million) of funds to help them tackle the water scarcity.

Lakes Maggiore and Garda were also hit by lower than normal water levels for this time of year, while further south the Tiber River, which runs through Rome, also dropped.

Local communities, especially in the wealthy north, have been rationing water for weeks, while cities such as Milan have turned off decorative fountains. Several regions have called on Rome to declare a state of emergency to enable further financial aid and civil defense measures.

The Italian cities of Verona and Pisa are also restricting water usage as the country struggles with its worst drought in decades.

In the northern city of Verona, a city of a quarter of one million people, tap water can only be used for "domestic purposes, personal cleaning and hygiene," the local authorities said. Between 6 a.m. to 9 p.m. local time residents are not allowed to water gardens, allotments or sport fields, wash cars or fill swimming pools. Outside of these hours, people are being asked to voluntarily refrain from using tap water for these purposes.

In the Tuscan city of Pisa, similar rules will take effect on July 11, restricting the usage of drinking water for household activities.

The heat wave in Italy coupled with the worst drought and the conditions were linked to last week's disaster when the country's biggest Alpine glacier collapsed and crashed onto hikers. Italian Prime Minister Mario Draghi blamed global warming for the deadly collapse.

In recent days, several departments in France announced some restrictions and took similar measures to deal with drought and water shortages.

While many events were canceled in the Gironde province, all events to be held outside and indoors without air conditioning until the end of the summer were banned by the governor's decision.

Residents of Bargemon, a southern France village, were banned from using tap water to clean their teeth, because drought provisions may have made it unfit for human consumption. Bargemon also announced on its website that tap water must not be drunk or used to make infant formula or prepare raw foods. Instead, residents were told they can pick up bottles of water in the town hall.

Due to drought conditions, water currently is being delivered by tankers, which could affect its quality, the local authorities explained.

UNICEF and the World Health Organization (WHO) warn that by 2030, 1.6 billion people will be left without safely managed drinking water services, and 2.8 billion will not have safely managed sanitation.

Without altering current levels of water consumption and pollution, almost half of the world's population will struggle to meet their water needs and to have access to water by 2030 due to climate change and population growth, a new report from the International Resource Panel (IRP), a consortium of 27 internationally renowned scientists, 33 national governments and other groups, with communities without access to safe drinking water and sanitation, as well as water for agriculture and energy.

With the increasing understanding of the importance of water, new institutions are being established around the world to carry out studies aimed at tackling water scarcity.

In March, experts launched a new global commission to study the value of the world's water in order to contend with worsening water woes. Comprised of economists, scientists, community leaders and policymakers, the commission will investigate governance models to protect water resources. The commission also may consider pushing for a global price for freshwater, similar to what is being attempted with carbon markets.

The work by the Global Commission on the Economics of Water is meant to offer advice on water management worldwide, as climate change and deforestation take an increasing toll on the water and rainfall supplies, reported Reuters citing co-chair Johan Rockstroem as saying ahead of unveiling the new group at the World Economic Forum.