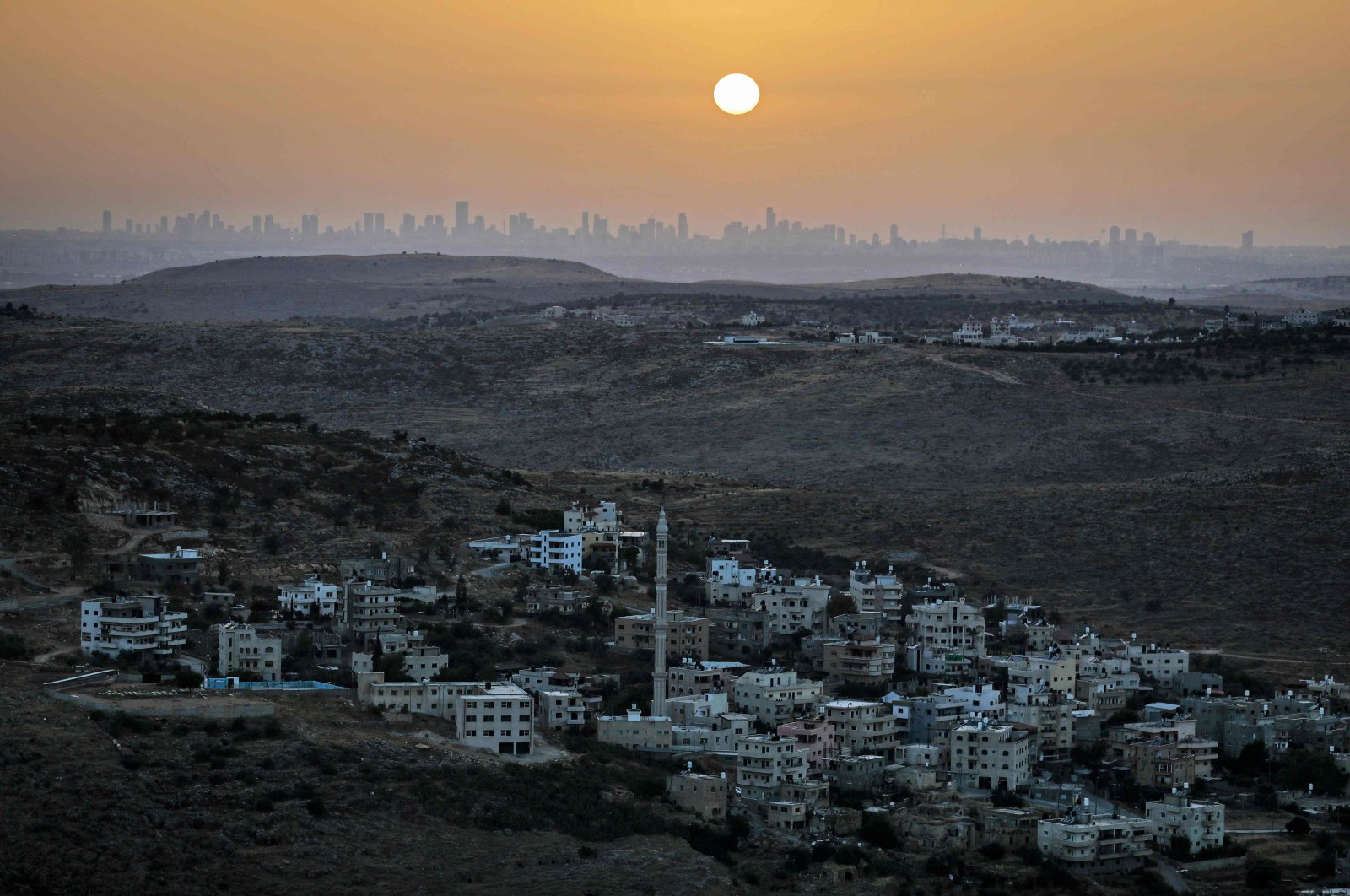 A picture taken from the Israeli settlement of Naale in the occupied West Bank northwest of the Palestinian city of Ramallah shows the skyline of the Israeli coastal city of Tel Aviv, June 17, 2020. (AFP Photo)
by Compiled from Wire Services Jun 25, 2020 3:37 pm
RECOMMENDED

Hamas warned Thursday that Israel's planned annexation of parts of the occupied West Bank would amount to a "declaration of war" against Palestinians.

"The resistance considers the decision to annex the West Bank and the Jordan Valley to be a declaration of war on our people," said the spokesman for Hamas Abu Ubaida.

The warning came just days before Israeli Prime Minister Benjamin Netanyahu said he would start implementing annexation, a move opposed by the United Nations as well as regional powers.

The United Nations envoy for the Middle East also warned Israel on Thursday that carrying out its plans to annex parts of the occupied West Bank could set off a spasm of violence that would upend Israeli-Palestinian relations and reverberate across the region.

Speaking to a group of foreign correspondents in Jerusalem, Nickolay Mladenov, the U.N. special coordinator for the region, said any Israeli unilateral action "will have economic and security repercussions on the ground that will affect the lives of both Israelis and Palestinians.”

"Surely any such moves will be met by counter moves by the Palestinian Authority and they have already started,” he told members of the Foreign Press Association, noting how the Palestinians have absolved themselves from abiding by past agreements with Israel.

"For now we have the clear commitment by the Palestinian leadership that they will do everything in their power to contain law and order in the areas they control," he said. "But as the money runs out and as the political prospects become more grim, I feel that will become more difficult or impossible in the future."

His stern warning comes amid a flurry of international pressure on Israel to recant on its plans.

On Wednesday the United Nations and the Arab League made a joint appeal for Israel to abandon its plans to annex parts of the occupied West Bank. The call was made during a U.N. Security Council videoconference in which several government ministers participated. It was the last international meeting before Israel goes ahead with the plans as early as July 1.

"I call on the Israeli government to abandon its annexation plans," U.N. Secretary-General Antonio Guterres said. He reiterated the longstanding goal of a two-state solution with an independent, contiguous, sovereign and viable Palestinian state, with Jerusalem as the capital of both states.

More than a thousand European lawmakers also signed a joint letter protesting Israel’s plan, saying such a move would "be fatal” to hopes for a peaceful resolution of the Israeli-Palestinian conflict.

Most of the international community considers the settlements illegal. The Palestinians seek the territory as part of a future independent state and have preemptively rejected U.S. President Donald Trump's plan, which endorsed the annexation.

Even British Prime Minister Boris Johnson, a close Netanyahu ally, said last week that he strongly opposed the annexation of parts of the West Bank, which would "amount to a breach of international law.”

U.N. Secretary-General Antonio Guterres urged Israel on Tuesday to hear the global calls and not to carry on with its plans. He told The Associated Press that annexation would not only violate international law, but "would be a major factor to destabilize the region.”

The Israeli government has said it could begin the annexation process from July 1. Its plans are to annex Jewish settlements in the West Bank as well as the strategic Jordan Valley. The plan - proposed by Washington – would see the creation of a Palestinian state but on reduced territory and without Palestinians' core demand of a capital in east Jerusalem.