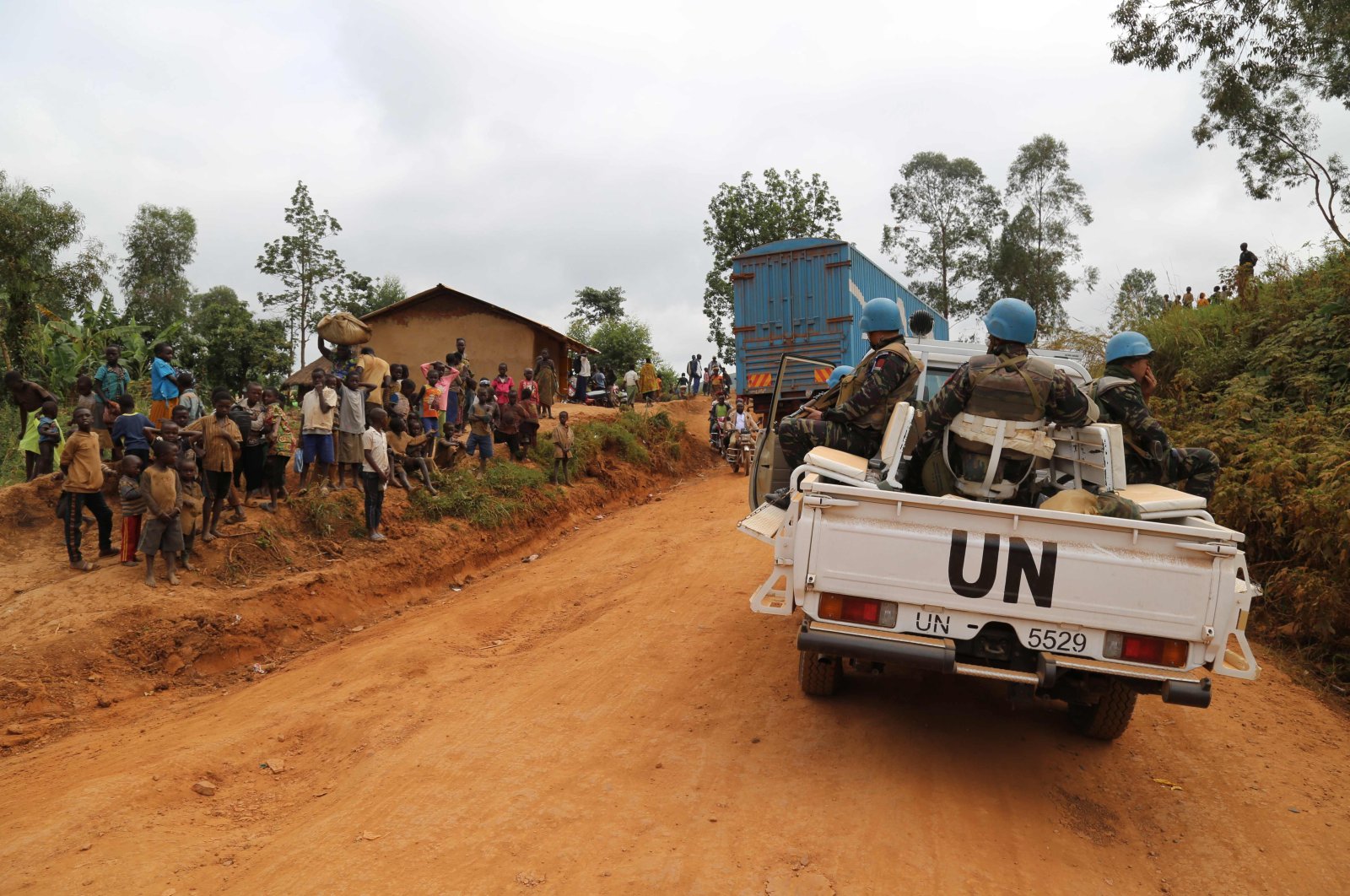 In this photograph taken on March 13, 2020, Moroccan soldiers from the UN mission in DRC (Monusco) ride in a vehicle as they patrol in the violence-torn Djugu territory, Ituri province, eastern DRCongo. (AFP Photo)
by Associated Press Mar 22, 2020 12:07 am
RECOMMENDED

The U.N.’s internal oversight body says in a report on U.N. peace operations that the number of fraud cases it decided to investigate last year increased nearly 80% from 2018, while the number of sexual exploitation and abuse cases rose 40%.

The 2019 report by the Office of Internal Oversight Services, which was circulated Friday, said the highest number of cases it investigated were in the U.N. peacekeeping mission in Central African Republic, followed by the peacekeeping operations in Mali, Congo, Western Sahara and South Sudan.

Of the 241 cases investigated, 77 related to fraud, a 79% increase from the previous year and 73 cases related to sexual exploitation and abuse, a 40% rise.

In audits of peace operations, the investigative body criticized the South Sudan mission for its management of office space and accommodation units. It said that “weaknesses in the invoicing and collection of rental fees from third parties had led to $1.8 million in rental charges not being collected for more than 14 months.” It added that as of Aug. 31, 2019, the mission had not recovered $379,742 for accommodations provided to uniformed personnel and U.N. volunteers at the United Nations House, a peacekeeping base in the capital of Juba.

In the audit of aviation in the U.N. peacekeeping mission in southern Lebanon, the report said 80% of the passenger flights sampled transported senior management and military staff “without clear justification.” In many instances, it said, the air mission requests had been submitted late and alternative transport arrangements weren’t considered, “which could have resulted in savings, with minimal extra travel time.” It said 45 special flights cost $64,000 more than ground transportation.

In the peacekeeping mission in Mali, the body called for improvements in inventory management in its centralized warehousing, saying 249 items valued at $3.4 million could not be located in a 2018-2019 inventory.

The report said of the 241 investigations, 44 cases involved the peacekeeping mission for Central African Republic, 36 were in Mali, 35 in Congo, 33 in Western Sahara and 30 in South Sudan, 16 related to the U.N. political mission in Afghanistan, and the other 55 involved 18 other peace operations.

The report said that while looking into an allegation that a member of a military contingent in Central African Republic sexually exploited and abused a 14-year-old girl, investigators identified 10 peacekeepers who had sexually exploited and abused 10 local female victims, including minors, in exchange for money and food. It said the findings were transmitted to the peacekeepers’ home country, which was not identified.

In South Sudan, investigations included sexual exploitation, assaults by a staff member against local people, forgery and misrepresentation by a staff member and pornographic materials accessed on an official computer by a peacekeeper. In addition, investigators corroborated an allegation that a member of a military contingent sexually harassed a female colleague.

The investigative body said it also corroborated an allegation that a local staff member in South Sudan exploited a local woman who became pregnant twice and was “either forced or manipulated into having unwanted abortions.” It added that the staff member “fraudulently paid for treatment relating to one of the abortions using his wife’s medical insurance policy.”

In Liberia, where the U.N. peacekeeping mission ended in March 2018, the body said it investigated a report that a former peacekeeper had sexually exploited a local woman, resulting in the birth of a child and that other local women had been exploited by members of the same national military contingent. It said the investigation, conducted in conjunction with an officer from the nation that provided the peacekeepers, identified 57 victims of sexual exploitation. It said 66 peacekeepers were implicated, of whom 38 were identified.