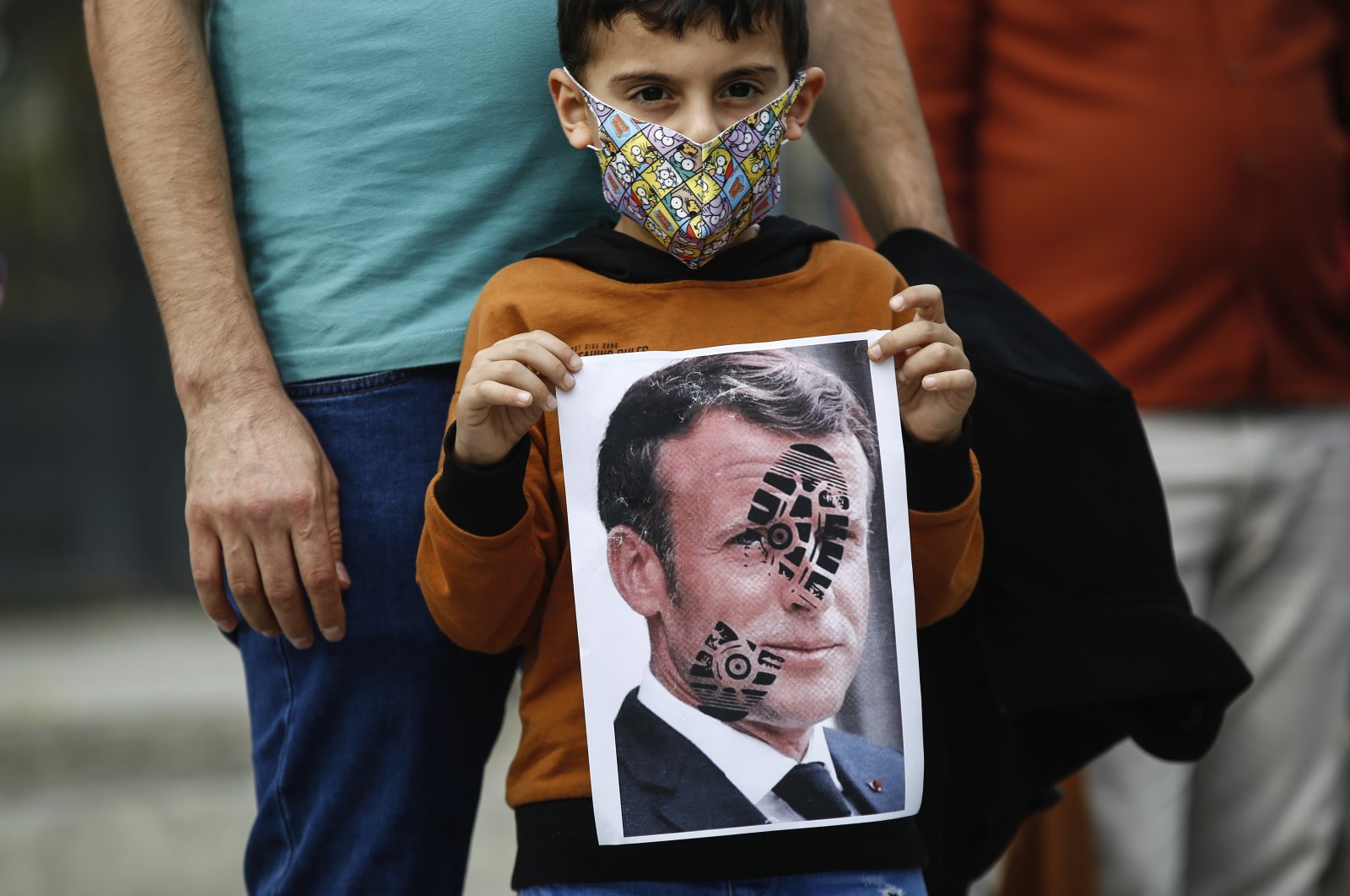 A child holds a photograph of France's President Emmanuel Macron, stamped with a shoe mark, during a protest against France in Istanbul, Oct. 25, 2020. (AP)
by DAILY SABAH WITH AGENCIES Oct 26, 2020 11:28 am
RECOMMENDED

French President Emmanuel Macron's Islamophobic remarks continue to witness an outrage all around the world as not only the Muslims but also the Christian communities raise voice against the hate speech.

Macron on Wednesday said he won’t prevent the publishing of insulting cartoons of Prophet Muhammad under the pretext of freedom of expression, a statement that sparked outrage in the Arab and Muslim world. France recently launched an extensive witch hunt against the Muslim community following Macron calling Islam a problematic religion that needs to be contained. Many nongovernmental organizations (NGOs) and mosques have been shut down in the last two weeks, while assaults against Muslims have peaked.

Jalal Chahda, a senior anchor with the Qatar-based Al-Jazeera news channel, said in a tweet: "I am Jalal Chahda, an Arab Levantine Christian and I strongly reject and denounce the insult to the Prophet of Islam, the Messenger #Mohammad. Blessings and peace."

Chahda also attached a photo, saying: "Muhammad, may God bless him and grant him peace."

It was followed by comments from his Muslim colleagues praising the tweet.

Ghada Owais, another Al Jazeera presenter who is also Christian, retweeted Chahda's tweet, saying: "I refuse to hurt the feelings of Muslims or to generalize terrorism and link it to Islam."

Michael Ayoub said on Twitter: "I really despise the person (who) insults the religion of another or mocks him or his messengers."

"What happened in France was a degeneration and this underscores that they are very far from the teachings of the Bible."

Raymond Maher wrote on his Twitter account that, "Since yesterday, all that I see in my Facebook newsfeed are posts for Christians who condemn insulting Prophet Muhammad and that's how our nature is in Egypt. We are one (Muslims and Christians)."

On Facebook, dozens of Christians including "Fathi Daniel" and "Wael Elbatl" posted pictures with similar comments which were accompanied by praise from Muslims.

Egyptian lawyer Nevin Malak also tweeted under the hashtag "#Against insulting the prophet" quoting some of the teachings of the Bible that call for respecting other religions.

Over the past few days, France has witnessed the posting of insulting pictures and drawings of the Prophet Muhammad on the facades of some buildings in the country.

Macron this month also described Islam as a religion “in crisis” worldwide and said the government would present a bill in December to strengthen a 1905 law that officially separated church and state in France. He announced stricter oversight on schooling and better control over foreign funding of mosques. But the debate over the role of Islam in France has hit a new intensity after the beheading of teacher Samuel Paty which prosecutors say was carried out by an 18-year-old Chechen who had contact with a terrorist in Syria.

The latest of the similar move came from Pakistan, where the French ambassador in Islamabad was summoned on Monday in reaction to Macron.

"The seeds of hate that are being cultivated today will polarize the society and have serious consequences," Foreign Minister Shah Mehmood Qureshi said in a statement.

The move comes a day after Pakistan's Prime Minister Imran Khan wrote a letter to Facebook's chief Mark Zuckerberg seeking a ban on Islamophobic content similar to that in place for Holocaust denial content.

Qureshi said Pakistan had urged the United Nations "to take notice and action against the hate-based narrative against Islam."

"There is resentment in the world over the blasphemous caricatures ... (the) irresponsible statement of the French President has added fuel to the fire," the minister added.

On Sunday, Khan criticized Macron for "creating further polarization and marginalization that inevitably leads to radicalization."

Some of the other countries that bashed France for its Islamophobic stance were Egypt, Libya, Yemen and Palestine, where several protests have taken place against Macron.

In Lebanon, Muslims decided to spend the Mawlid an-Nabi (the birth of the Prophet Muhammad) by condemning France for its Islamophobic attitude. While state authorities bashed Macron's statements, several protests have taken place all over the country.

Participating in the protests, a Lebanese man Mohamad Ali Mostafa said that Macron should step back from his words and apologize to the Muslims as soon as possible.

Neda Zarif, from Beirut on the other hand, called on Muslims in France to react against Macron.

Similar protests have taken place in Tunisia as well where hundreds of protestors carried banners writing "Prophet Mohammad is our red line" on it.

Iran's parliament speaker condemned on Sunday the publishing of insulting caricatures of the Prophet Muhammad in France.

"The stubborn and unwise French officials offend the Prophet Muhammad (peace be upon him) and stoke anti-Islam stance in the world," Mohammad Bagher Ghalibaf tweeted. "Muslims and believers all condemn the abhorrent hostility of France's leaders toward the messenger of mercy, Muhammad."

In northern Syria, scores of civilians demonstrated in protest of Macron’s statements and the republications of the anti-prophet cartoons.

Protesters in the cities of Jarabulus and Tal Abyad burned photos of Macron and held banners defending the prophet.

“Islam is a religion of peace and has no place for terrorism; France is the source of terrorism,” said Wael Hamdu, head of the Tal Abyad local council during the protest. “We didn’t forget the killing of 1.5 million people in Algeria by France,” he expressed to Anadolu Agency (AA).

Jordan's Foreign Ministry also criticized the "continued publication of caricatures of the Prophet Muhammad, under the pretext of freedom of expression."

About 200 people protested outside the residence of France's ambassador to Israel Saturday against Macron after he vowed his country would not "give up cartoons" depicting the Prophet Muhammad.

Protesters, some of them wearing surgical face masks in keeping with coronavirus regulations, carried banners in Arabic in support of the prophet, Agence France-Presse (AFP) journalists at the scene said.

The demonstration was held in the largely-Arab district of Jaffa in Tel Aviv, after Muslim evening prayers.

One of the demonstrators, Amin Bukhari, accused Macron of playing the game of "the extreme right."

"The Prophet Muhammad is the most sacred thing in Islam and whoever attacks his honor, attacks an entire people," he told the crowd.

An anti-malware and support unit account on Twitter said a major cyberattack against French websites was underway.

"A wave of cyberattacks has hit French websites Sunday evening," it said, without elaborating.