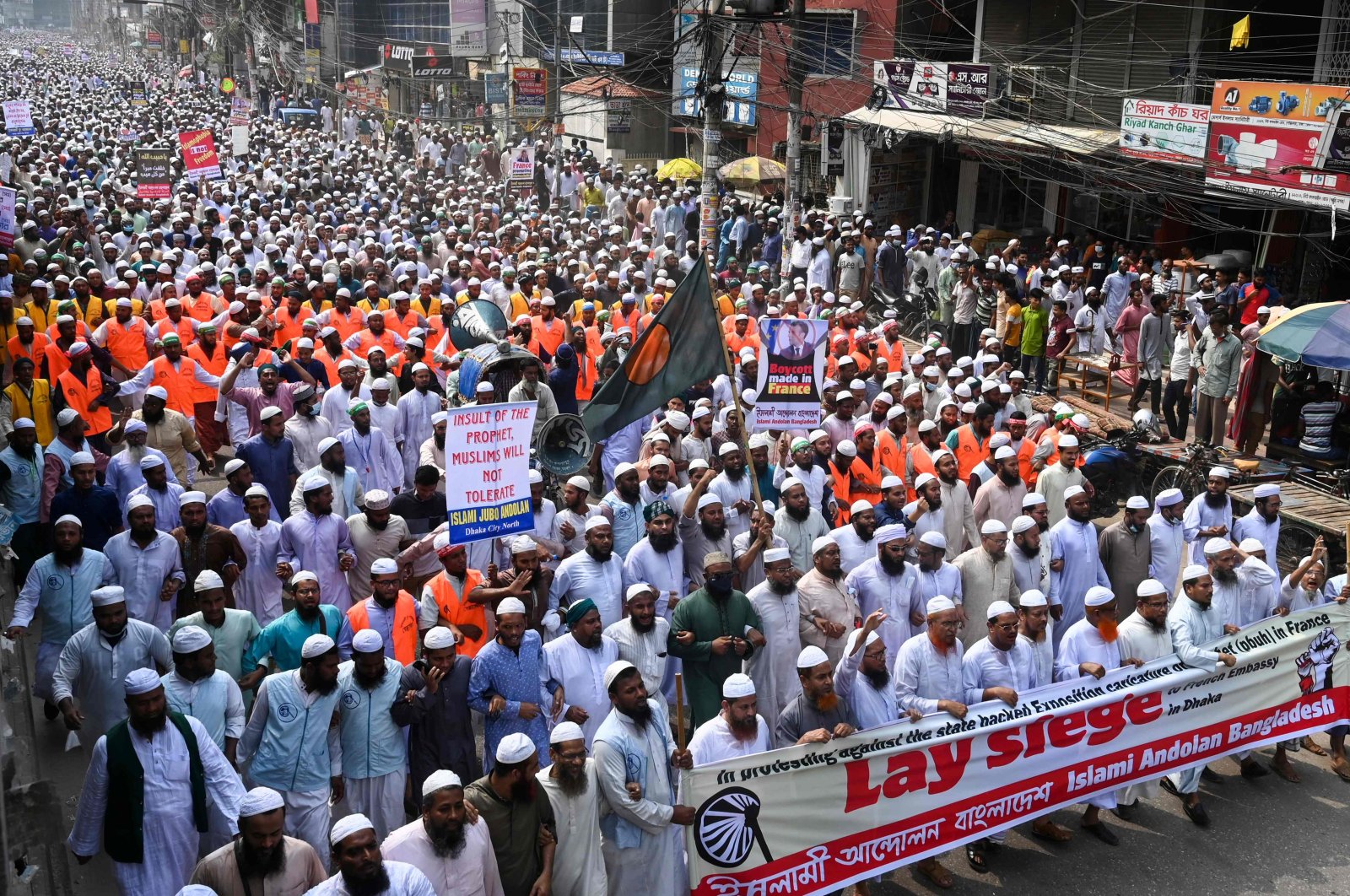 Thousands of Bangladeshi citizens hold a protest march calling for the boycott of French products and denouncing French President Emmanuel Macron for his comments on Prophet Mohammed caricatures, in Dhaka, Bangladesh, Oct. 27, 2020. (AFP)
by DAILY SABAH WITH AGENCIES
Oct 28, 2020 1:10 pm

Muslims in all corners of the world united against rising Islamophobic sentiments in Europe, especially in France, as protests and boycotts continue to spread.

Intellectuals and politicians from southern African nations slammed France on Tuesday for President Emmanuel Macron's insulting remarks about Islam and the Prophet Muhammad.

"Macron is also trying to shift focus away from his own domestic problems like corruption and cutting of social spending," said Sayed, who chairs the provincial branch of the ANC Youth League. "The move toward Islam in the West is striking fear in Western leaders like Macron, and they use this narrative for cheap political means to stay relevant and stay in power."

Muhammed Haron, a professor at the University of Botswana, said: "The French president's statements and deportment should be condemned in the harshest of terms because through these he has perpetuated one form of hate crime."

He also refered to the Turkish President Recep Tayyip Erdoğan's call that macron needed mental treatment. "One concurs with Erdoğan that Macron should have 'his mental health tested,'" Haron said, adding that the French president's remarks were Islamophobic. "It is a crime that has been articulated under the guise of 'freedom of expression,'" he said.

A secular and democratic state should be the umbrella of not only some but all, according to Shafiq Morton, a journalist from Cape Town. "Like so many European orientalists, Macron thinks democracy and secularism are about being the same, and being identical, which is actually neo-fascism," he said.

Macron's remarks describing Islam as "a religion in crisis" were challenged by the television presenter. "How can Islam ever be in crisis when churches are closing down in Europe and more mosques are being built than any other place of worship?" he asked. "It is not Islam, or Muslims, who are in crisis. It is their political leaders, the corrupt and venal figureheads with whom Mr. Macron fraternizes."

The 2015 Charlie Hebdo caricatures resurfaced after a French teacher, Samuel Paty, was killed last week by a teenager of Chechen origin after Paty showed the cartoons in his class while discussing free speech. The attacker was shot dead by police.

Last Wednesday, Macron said he will not prevent the publishing of the cartoons under the pretext of freedom of speech, sparking outrage among the Muslim world. While French Muslims have accused him of trying to repress their religion and legitimizing Islamophobia. Several Muslim-majority countries, including Turkey and Pakistan, have condemned Macron's attitude toward Muslims and Islam, with President Recep Tayyip Erdoğan saying the French leader needs a "mental health check."

"We do not caricature their religious values such as Mary and Jesus. If we would, they would have reacted to us," said Kelko Oomori, a Japanese Muslim worker in a supermarket selling halal products in Tokyo.

Oomori told AA that as a Muslim he does not approve of the publishing of the caricatures and stated that this move shows the disrespect of France toward religions.

Akima Jun, a Muslim Japanese engineer, also referred to France's approach to Islam as "ridiculous and weird." Jun added that the hatred in the subconscious of the French is based on the fact that they do not truly understand Islam.

Some of the other countries that condemned France for its Islamophobic stance were Egypt, Libya, Yemen and Palestine, where several protests have taken place against Macron.

In Lebanon, Muslims decided to spend the Mawlid an-Nabi (the day marking the birth of the Prophet Muhammad) condemning France for its Islamophobic attitude. While state authorities slammed Macron's statements, several protests have taken place all over the country.

Similar protests have taken place in Tunisia as well where hundreds of protestors carried banners featuring the statement, "Prophet Mohammad is our red line."

In northern Syria, scores of civilians demonstrated against Macron’s statements and the republications of the anti-prophet cartoons.

Protesters in the cities of Jarablus and Tal Abyad burned photos of Macron and held banners defending the prophet.

The largest protest, however, has taken place in Dhaka. Around 10,000 people in Bangladesh rallied in the South Asian nation's capital on Tuesday to protest France's president and his staunch support of secular laws that deem caricatures depicting the Prophet Muhammad as acceptable.

Thousands of demonstrators carried banners and placards reading "all Muslims of the world, unite" and "Boycott France" as they launched a march toward the French Embassy in Dhaka to let their reservations about the remarks be known, calling on people to boycott French products.

Bangladeshi protesters gathered in front of the main Baitul Mokarram Mosque in downtown Dhaka Tuesday morning. The group walked toward the French Embassy, but police intercepted the march, which ended without violence.

CAIR warns against traveling to France

Meanwhile, the Council on American-Islamic Relations (CAIR) warned American Muslims on Tuesday against traveling to France, saying they may face danger and discrimination there.

It cited a racist stabbing attack on two Muslim women in Paris and legal prohibitions on religious attire.

In a statement, CAIR National Executive Director Nihad Awad called on the French government to end its "irrational, illegal and hypocritical campaign of bigotry against its own citizens."

"Everyone in France should have the right to practice their religion, and everyone around the world has the right to decide which products they purchase," said Awad.

"France cannot extol the virtues of free speech while punishing French Muslims for engaging in free speech, nor can France claim to be a beacon of freedom while calling on dictatorships to ban their Muslim citizens from boycotting French products," said Awad.

Muslims in France, on the other hand, say that Macron has divided the country with the controversial remarks on Islam.

Amid tension between the government and French Muslims, Macron on Monday posted a photo on Twitter saying, "We are one," which Yasser Louati, head of the Justice and Liberties for All Committee, called a "joke," accusing the president of "excluding Muslim citizens."

"How did we go from France being celebrated in the Muslim world or the Arab world for its refusal to join America in destroying Iraq in 2003 to France today being boycotted under Emmanuel Macron?" Louati asked in an interview with AA, adding that Macron lacks an understanding of foreign policy.

"His arrogance has not only divided the French population but also brought it to a crisis," the human rights activist added.

Farid Hafez, a political scientist and lecturer at the University of Salzburg in Austria, described Macron's move as "the manifestation of discrimination based on the law."

"Macron is following his strategy of creating a French Muslim identity that is first of all invisible and secondly politically harmless, not questioning the status quo of France's discriminatory policies vis-a-vis its Muslim population," he said.

French voters will head to the polls for presidential elections in less than two years, in April 2022. The polls, however, currently show Macron neck and neck with Marine Le Pen, leader of the far-right National Rally.

Many believe Macron's strategy to win the next elections is by co-opting the arguments of the far-right.

Meanwhile, a French Muslim human rights group on Monday announced plans to expand its activities outside the country amid concerns for its safety and recent controversial statements by officials on Islam.

"As an organization, we no longer feel we can conduct our work in a safe environment, as our lives are threatened and the government designates us as an enemy," said the Collective Against Islamophobia in France (CCIF) in a statement.

The group said they had been targeted by hate messages, death threats and insults over the past week after the French government announced it wanted to dissolve the organization.

"Using fake news from the far-right, some political figures in the entourage of President Macron have even tried to pin last Friday's attack on organizations who denounce Islamophobia, as if it was conceptually impossible to address both terrorism and contemporary forms of racism, including Islamophobia," said the statement.

"For these reasons, whatever the outcome of the government's attempt to dissolve CCIF, we have decided to extend our activities internationally to ensure continuity of our operations and protect our teams."