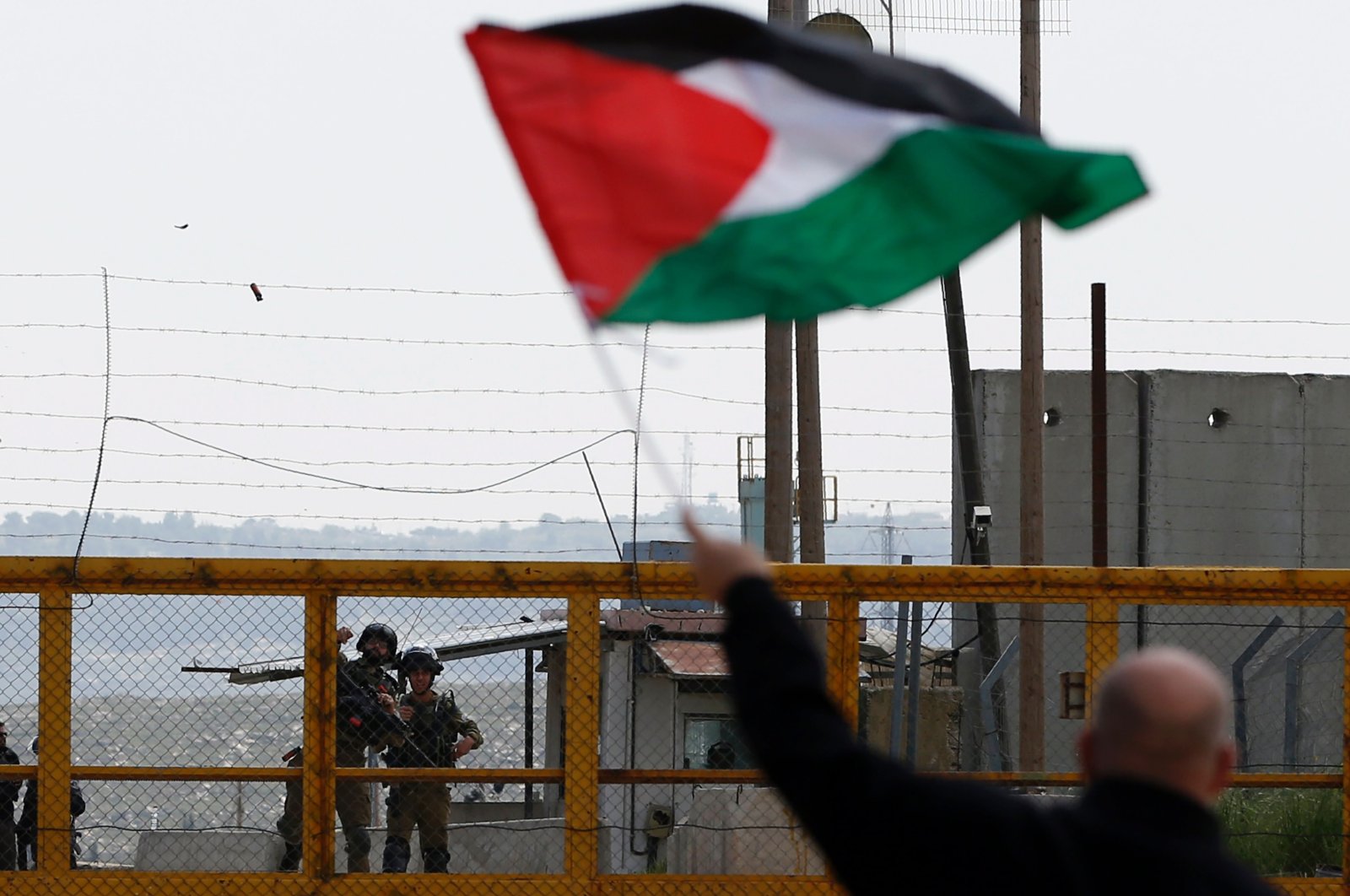 A Palestinian protester waves his national flag in front of Israeli security forces outside the compound of the Israeli-run Ofer prison near Betunia in the Israeli occupied West Bank, March 30, 2016. (AFP Photo)
by Daily Sabah with Agencies Mar 19, 2020 1:04 pm
RECOMMENDED

At least four Palestinian prisoners in Israeli jails, where many inmates are subjected to torture and a lack of medical care, were reported to have been infected by the coronavirus, according to the Palestinian Prisoners Society (PPS).

In a press release, the nongovernmental organization said the Israel Prison Service reported that the prisoners caught the virus in Megiddo Prison. The virus was transmitted to detainees by a prisoner who was interrogated by an Israeli investigator at the Petah Tikva Investigation Center.

"The detainees face the risk of infection from the jailers and investigators who pose a threat to their lives," the NGO added.

Earlier this week, an inmate at the Ashkelon prison was removed as a precaution after being examined by an Israeli doctor, who suspected him of suffering from COVID-19.

According to PPS, 19 out of 35 prisoners detained with the inmate in the same department were immediately isolated last Friday. At Jerusalem’s al-Maskobiya prison, Israeli authorities have isolated 100 prisoners after an officer was suspected of contracting the virus.

Palestinian figures released last year suggest that some 6,500 Palestinians continue to languish in Israeli detention facilities. Around 500 were detained under the so-called administrative detention laws. The figures also show that 700 detainees suffer from chronic diseases, which need urgent medical treatment and intensive follow-up, while 26 have cancer.

Israel’s perpetual violations of Palestinians’ basic rights in its prisons, including torture, repression and assaults have long been under the spotlight. Last month, Israel’s detention authority decided to reduce rations of bread, water and meat for Palestinian prisoners, exposing once again the ongoing systematic violations of human rights in Israeli jails. More than 200 Palestinians have lost their lives in Israeli prisons since 1967 as a result of torture, lack of medical care or from gunshot wounds, Palestinian human rights organizations reported in 2018.

The total number of coronavirus cases in Israel climbed to 529, the Health Ministry said Wednesday. Six of the infected people, who are currently receiving treatment, are in serious condition, the ministry said in a statement cited by Israel's Broadcasting Authority. Meanwhile, Israeli newspaper Maariv reported that a total of 5,639 Israeli soldiers are being quarantined.

With the numbers quickly rising, authorities have issued a series of tough guidelines that have brought the country to a standstill. People have been instructed to stay home, tens of thousands are in home quarantine and foreigners have been banned from entering the country. Most controversially, the Israeli government instructed the shadowy Shin Bet internal security service to start deploying the agency's phone surveillance technology to help curb the spread of the new coronavirus in Israel by tracking the moves of the infected. Israel uses phone surveillance in the occupied Palestinian territories, saying it’s an important tool to prevent attacks on Israelis, but critics say it’s also aimed at maintaining tight control. The surveillance in Israel has sparked widespread criticism from lawmakers and civil rights groups.