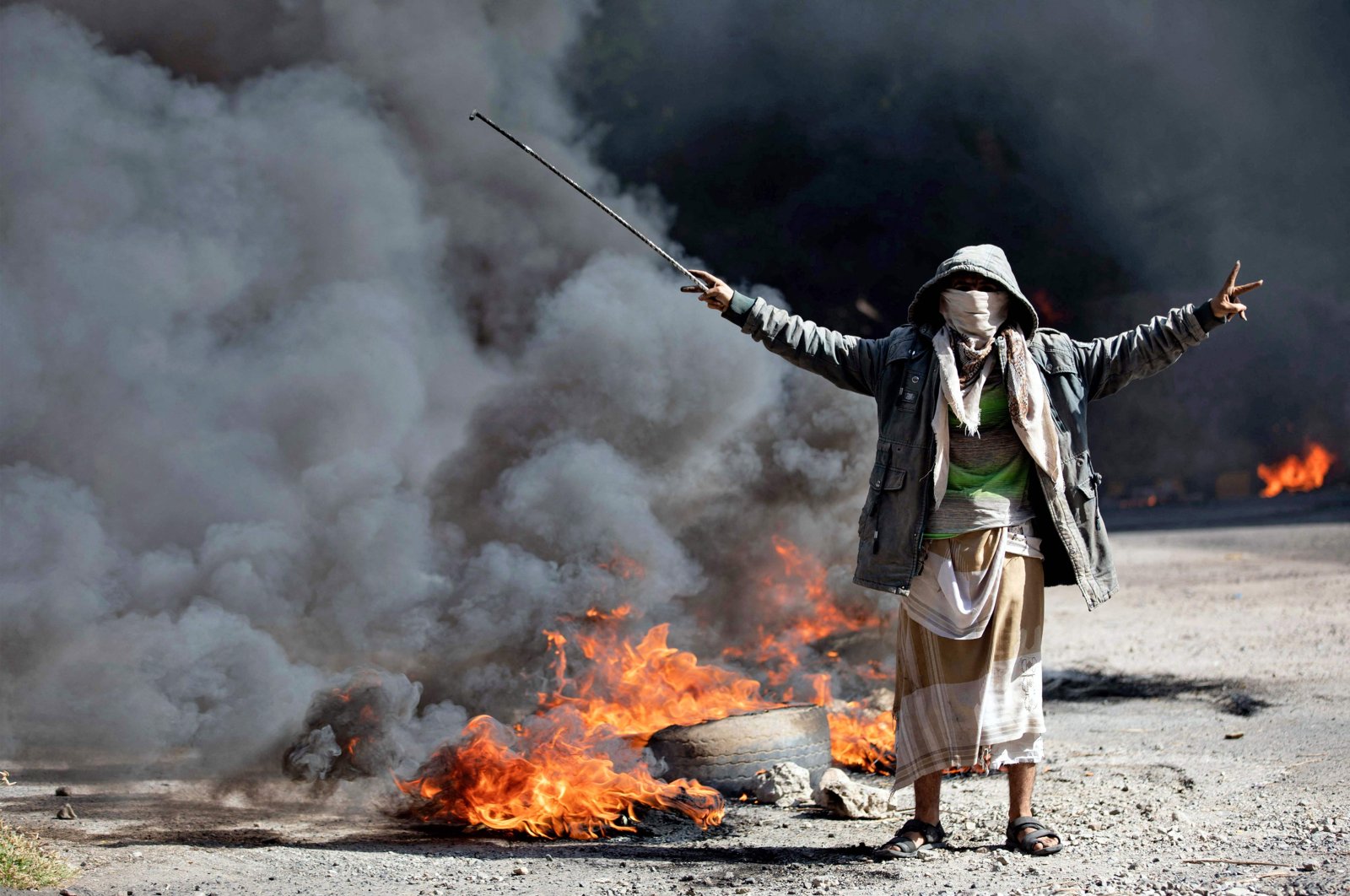 A Yemeni man flashes the V for victory sign next to burning tires during protests calling for the removal of the Saudi-backed coalition government and deteriorating economic and living conditions, in Yemen's third city of Taez on Sept. 27, 2021. (AFP Photo)
by ASSOCIATED PRESS Sep 27, 2021 10:56 pm
RECOMMENDED

At least seven people were wounded when the security forces of Yemen’s internationally recognized government intervened in a protest held by thousands of protesters decrying deteriorating economic conditions in a southwestern province.

Demonstrators took to the streets of Taiz, one of Yemen’s largest cities, to protest an unprecedented drop in the value of Yemen's currency, the rial.

The accelerating decline has made it difficult for most Yemenis to meet their basic needs, including having enough food, the officials said.

The protesters roamed the streets of the city and burned tires before security forces dispersed them by firing into the air. They also beat the fleeing demonstrators with batons, they said.

The officials spoke on condition of anonymity because they were not authorized to brief media. "We are sending a message to the government and the parliament members: Stop gambling with people’s pain and work for Taiz,” said protester Anwar Mohammed.

Taiz is held by the government of President Abed Rabbo Mansour Hadi, but it has remained besieged for years by the country’s Houthi rebels.

Monday’s protests came some two weeks after similar demonstrations in Yemen’s southern areas, including the port city of Aden, which serves as an interim capital for Hadi’s government.

The rial lost 36% of its value in July, according to the U.N. humanitarian agency. One U.S. dollar trades at more than 1,000 rials in the black market.

Yemen has been convulsed by civil war since 2014 when Iran-backed Houthi rebels took control of the capital of Sanaa and much of the northern part of the country, forcing Hadi’s government to flee to the south, then to Saudi Arabia.

A Saudi-led coalition entered the war in March 2015, backed by the United States, to try restore Hadi to power, and threw its support behind his internationally backed government.

Despite a relentless air campaign and ground fighting, the war has deteriorated largely into a stalemate and spawned the world’s worst humanitarian crisis. Tens of thousands of Yemenis live in famine-like conditions. More than 20.1 million of the country’s some 30 million people need some form of humanitarian aid, according to the U.N.