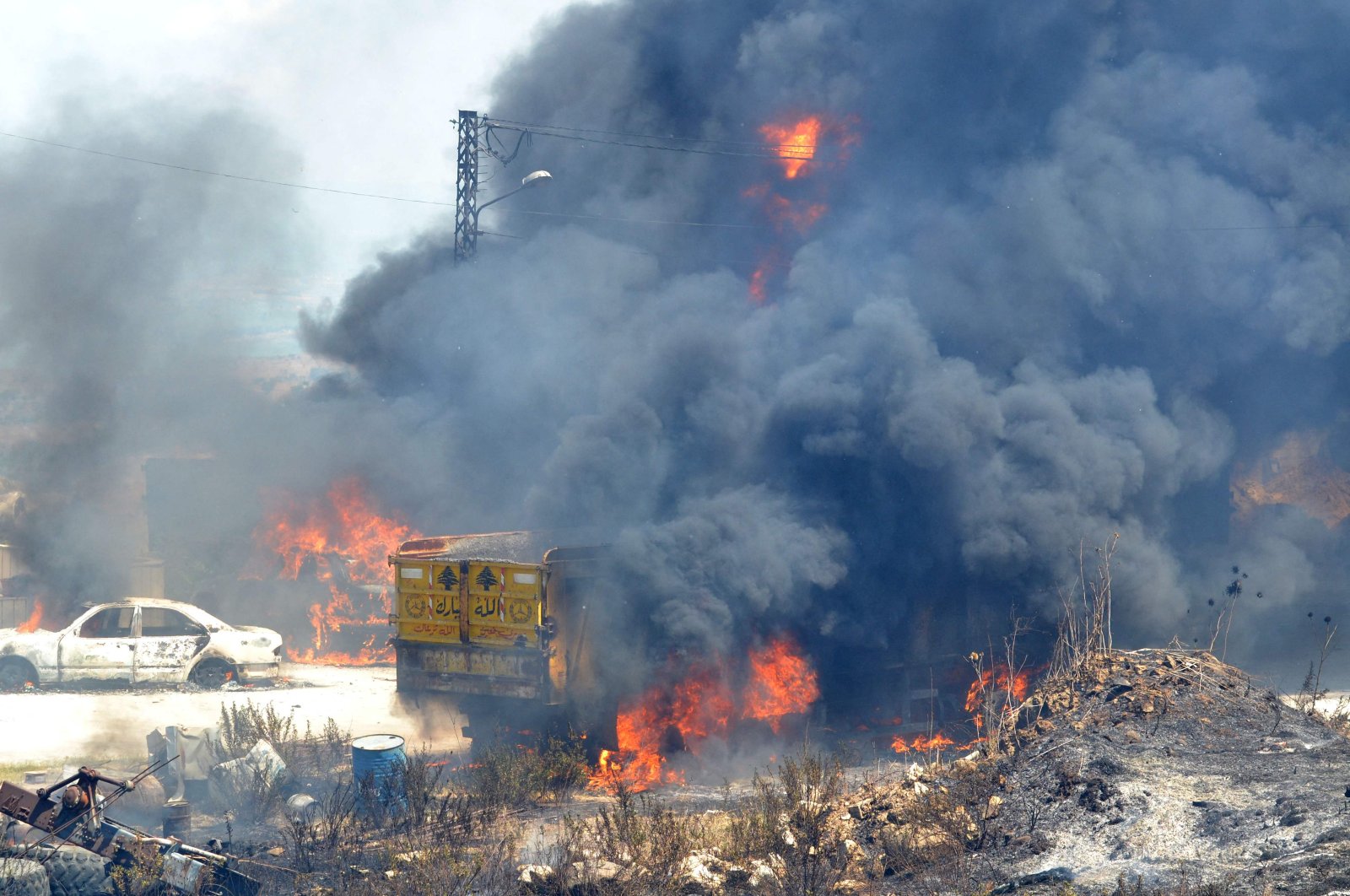 Vehicles burn outside the reported home of the lot owner, where the exploded fuel tank was placed, in the village of Tlel in Lebanon's northern region of Akkar, Aug. 15, 2021. (AFP Photo)
by French Press Agency - AFP Aug 15, 2021 11:22 pm
RECOMMENDED

A group of angry protesters gathered Sunday after a fuel tank explosion killed 28 people and injured 80 in Lebanon, the latest catastrophe to spark outrage in the crisis-hit country.

The tragedy in the impoverished north overwhelmed medical facilities and heaped new misery on a nation already beset by an economic crisis and severe fuel shortages that have crippled hospitals and caused long power cuts.

It also revived bitter memories of a massive blast at Beirut port last August that killed more than 200 people and destroyed swathes of the capital.

The health ministry said the explosion in Al-Tleil village in the Akkar region killed 28 people and wounded 80.

Anger boiled over as protesters attacked the Beirut home of premier-designate Najib Mikati to demand his resignation, with rocks thrown and clashes with anti-riot forces, the official National News Agency (NNA) reported.

The military said a fuel tank that "had been confiscated by the army to distribute to citizens" exploded just before 2:00 am (2300 GMT) on Sunday.

Two soldiers died, 11 were critically injured and four are missing, it added.

The NNA said the blast followed scuffles as people crowded to get petrol.

Hospitals in Akkar, one of Lebanon's poorest regions, and in the northern port city of Tripoli said they had to turn away many injured because they were ill-equipped to treat severe burns.

"The corpses are so charred that we can't identify them," employee Yassine Metlej at an Akkar hospital told Agence France-Presse (AFP).

A security source said that DNA testing to identify victims had begun.

"Don't leave us!" cried one mother beside her burned son as a man wept and prayed for his own son.

Akkar residents torched an empty house thought to belong to the owner of the land where the explosion took place, the NNA reported.

The army tweeted that the owner had been arrested.

A Turkish plane arrived in Beirut on Sunday evening to transport four soldiers who had suffered serious burns, the NNA reported.

Ismail al-Sheikh, 23, burned on his arms and legs, was driven by his sister Marwa to Beirut's Geitawi hospital, some 80 kilometers (50 miles) away.

"We were informed that the army was distributing gasoline... so people flocked to fill it in plastic containers," Marwa told AFP.

She said some witnesses said a lighter sparked the blast; others claimed shots were fired.

The explosion was widely seen as a direct consequence of official negligence that had pushed the country deeper into free fall.

"The dead are victims of a careless state," Marwa told AFP.

Sawsan Abdullah burst into tears at Geitawi hospital when a doctor told her that her soldier son was in critical condition.

"He's my only son!" Abdullah yelled, falling to the floor.

Lebanon, hit by a financial crisis, has been grappling with soaring poverty, a plummeting currency and dire fuel shortages.

The central bank this week said it could not afford to fund fuel subsidies because of dwindling foreign reserves, and accused importers of hoarding fuel to sell at higher prices on the black market or in Syria.

Fuel shortages have left many with just two hours of electricity a day, and several hospitals have warned they may have to close due to power outages.

President Michel Aoun ordered a probe into the blast and chaired an emergency defense council meeting, his office said in a statement.

It that hospitals would be provided with diesel to power generators.

The council also called on the government to task security forces with monitoring the storage and distribution of fuel to prevent further incidents.

Despite the economic crisis, political wrangling has delayed the formation of a new government after the last cabinet resigned in the wake of that blast.

Vital international aid pledges remain contingent on a new government being formed to spearhead reforms, and on talks restarting with the International Monetary Fund.

Russia called for a "thorough investigation" into Sunday's blast and Jordan urged a "comprehensive plan" for Lebanon.