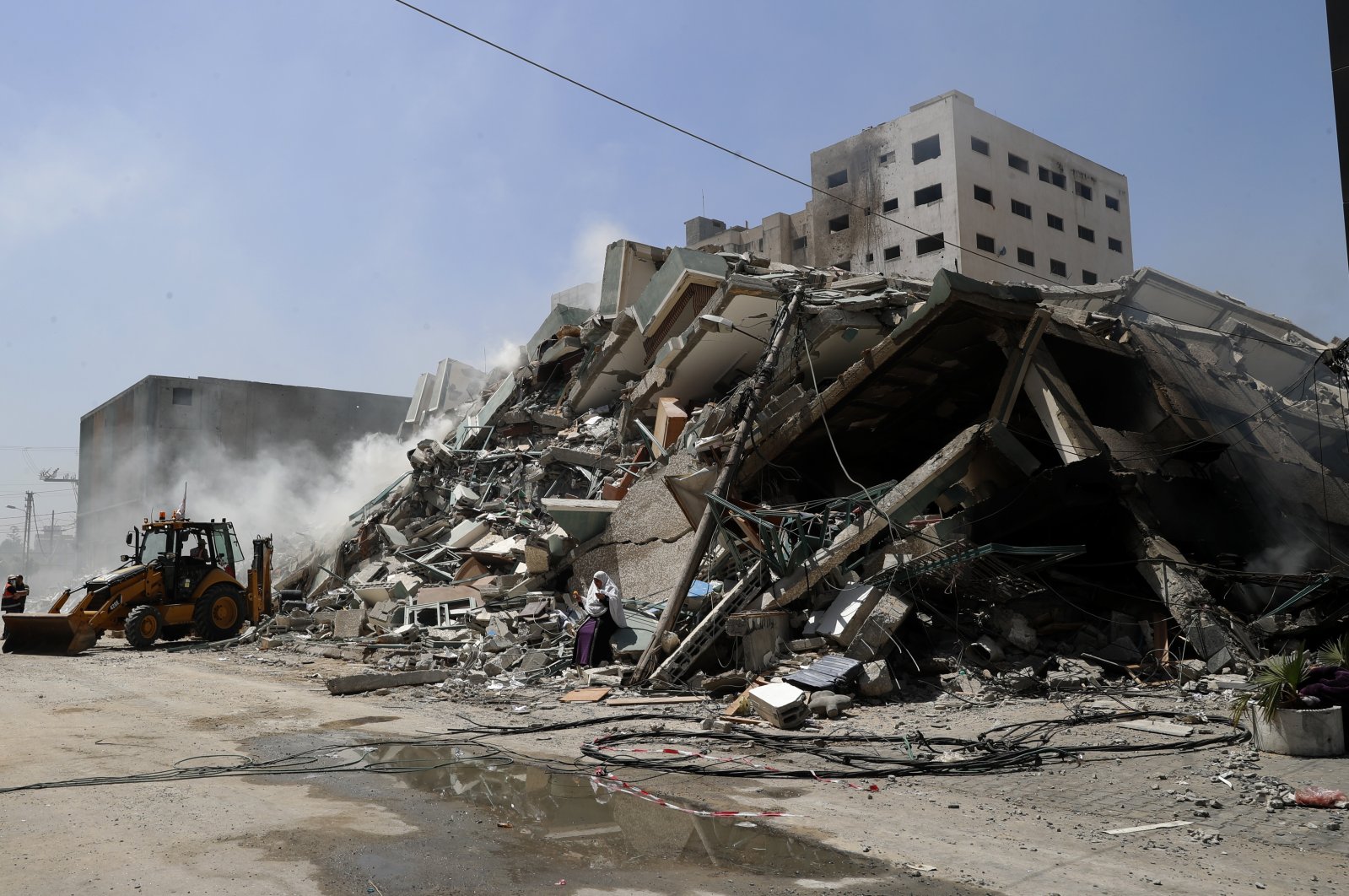 Workers clear the rubble of a building that was destroyed by an Israeli airstrike on Saturday, that housed The Associated Press, broadcaster Al-Jazeera and other media outlets, in Gaza City, Palestine, May 16, 2021. (AP Photo)
by ASSOCIATED PRESS May 17, 2021 12:25 pm
RECOMMENDED

Following an Israeli airstrike that destroyed a high-rise building that housed the offices of The Associated Press (AP), Al-Jazeera and other media outlets in the Gaza Strip, the AP’s top editor has called for an independent investigation, saying the public deserves to know the facts.

Sally Buzbee, AP’s executive editor, said Sunday that the Israeli government has yet to provide clear evidence supporting its attack, which leveled the 12-story al-Jalaa tower.

The Israeli military, which gave AP journalists and other tenants only about an hour to evacuate, claimed Hamas used the building for a military intelligence office and weapons development.

Israeli military spokesperson Lt. Col. Jonathan Conricus said Israel was compiling evidence for the United States but declined to commit to providing it within the next two days.

"We’re in the middle of fighting,” Conricus said Sunday. "That’s in process and I’m sure in due time that information will be presented.”

Prime Minister Benjamin Netanyahu said Israel would share any evidence of Hamas’ presence in the targeted building through intelligence channels. But neither the White House nor the State Department would say if any American official had seen it.

Buzbee said the AP has had offices in al-Jalaa tower for 15 years and never was informed or had any indication that Hamas might be in the building. She said the facts must be laid out.

"We are in a conflict situation,” Buzbee said. "We do not take sides in that conflict. We heard Israelis say they have evidence; we don’t know what that evidence is.”

In remarks Sunday, Netanyahu repeated Israel’s claim that the building housed an intelligence office of Hamas. Asked if he had relayed supporting evidence of that in a call with President Joe Biden Saturday, Netanyahu said, "We pass it through our intelligence people.”

The Paris-based Reporters Without Borders, known by its French acronym RSF, said in a letter to the ICC's chief prosecutor that the offices of 23 international and local media organizations have been destroyed over the past six days.

RSF said it had strong reason to believe that the Israeli military’s "intentional targeting of media organizations and intentional destruction of their equipment” could violate one of the court’s statutes.

It said the attacks serve "to reduce, if not neutralize, the media’s capacity to inform the public.” RSF asked the international court, based in The Hague, to include the recent attacks in the war crimes probe opened in March into Israel’s practices in Palestinian territories.

Buzbee said the AP journalists were "rattled” after the airstrike but are doing fine and reporting the news. She expressed concern about the impact on news coverage.

"This does impact the world’s right to know what is happening on both sides of the conflict in real time,” she said. U.S. Secretary of State Antony Blinken spoke by phone Saturday with AP’s president and CEO, Gary Pruitt.

The State Department said Blinken offered "his unwavering support for independent journalists and media organizations around the world and noted the indispensability of their reporting in conflict zones." Buzbee and Conricus spoke on CNN’s "Reliable Sources” and Netanyahu was on CBS’ "Face the Nation.”