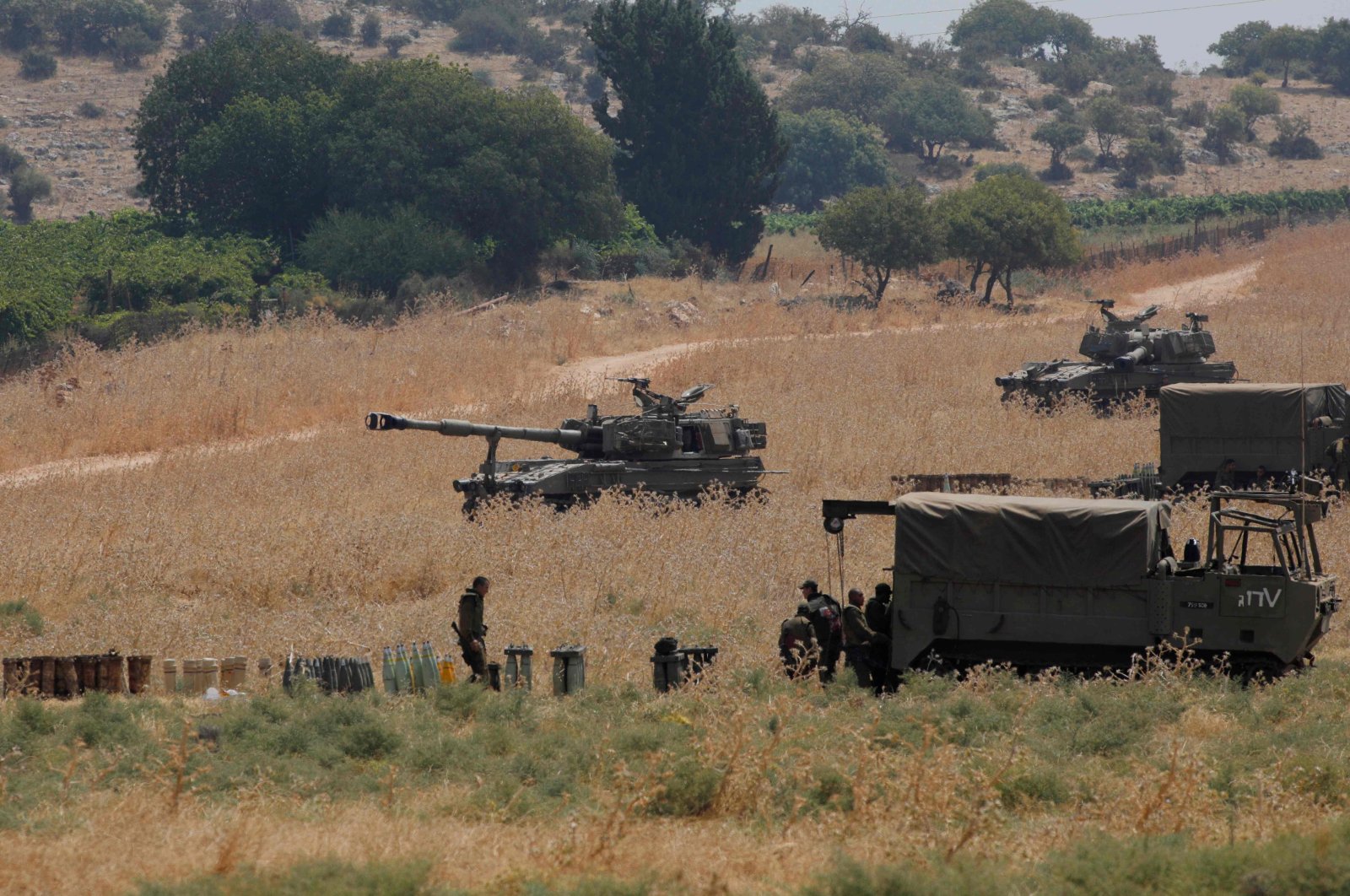 Armored vehicles and 155 mm self-propelled howitzers are deployed in the Upper Galilee in northern Israel on the border with Lebanon on July 27, 2020. (AFP Photo)
by agencies Jul 27, 2020 4:13 pm
RECOMMENDED

The Israeli military said there has been a "security incident" on Israel's northern border with Lebanon on Monday and ordered residents in the area to remain indoors.

Israel's N12 TV News reported an exchange of fire between Israeli forces and militants and said explosions were heard in the area.

"Following the security incident in the Mount Dov area ... residents are asked to stay in their houses. Any kind of activity in open areas is forbidden," an army statement said.

Lebanese sources familiar with the operation also said that Iran-backed Lebanese Shiite group Hezbollah carried out an operation against the Israeli army in the disputed Shebaa Farms area at the Israeli-Lebanese border.

"Lebanon and Hezbollah will bear the responsibility for any attack from Lebanese territory," Israeli Prime Minister Benjamin Netanyahu said in broadcast remarks, shortly before the reports of the incident.

According to Israeli daily Yedioth Ahronoth, Israel shuts Rosh Pina airport due to tensions on Israel's northern border with Lebanon.

Tension rose along Israel's northern frontiers with Lebanon and Syria, including the occupied Golan Heights, after a fighter of the Iranian-backed Lebanese Shiite group Hezbollah was killed in an apparent Israeli strike on the edge of Damascus on July 20.

The Israeli military said Thursday it was reinforcing the country's northern border with infantry troops “in accordance with the situational assessment.”

The announcement comes after a Hezbollah fighter was killed in an Israeli attack in Syria last week, Hezbollah's first declared casualty there since its leader warned last year that further killings of its members in Syria would face retaliation. Ali Kamel Mohsen, from south Lebanon, was killed by an Israeli airstrike near Damascus International Airport.

Hezbollah has said in the past it would retaliate for any fighter that Israel kills in Syria. Following the killing of two Hezbollah members in Damascus last August, Sayyed Hassan Nasrallah, the group's leader, vowed Hezbollah would respond if Israel killed any more of its fighters in the country. The group fired a barrage of anti-tank missiles into Israel on Sept. 1 last year after two of its fighters were killed in an Israeli airstrike near Damascus days earlier. That prompted a reprisal of heavy Israeli artillery fire in a rare burst of fighting between the bitter enemies. Hezbollah and Israel fought a 34-day war in 2006 that ended in a draw.

Israel is concerned over Iran's growing influence in the Middle East, particularly in Syria and Lebanon. Lebanon-based Hezbollah has deployed fighters in Syria as part of Iranian-backed efforts to support Bashar Assad in a conflict that spiraled out of protests against his rule in 2011. Israel has launched many strikes in Syria since the start of the country’s civil war. In the past two months alone, Syria has accused Israel of carrying out at least eight air raids in its territory. The last reported strikes came in late June.

Israel has targeted Assad regime troops, allied Iranian forces and fighters from Hezbollah, saying its goal is to end Tehran’s military presence in Syria. It rarely confirms details of its operations in Syria but says Iran’s presence in support of the regime is a threat and that it will keep up strikes.

Israel’s policy toward Syria since the beginning of the civil war has allowed Iranian proxies and the regime to gain more power, which, according to Israeli officials, have become a threat to the country's national security. Israel has repeatedly claimed that Iran was building military bases near the occupied Golan Heights and providing military equipment to Hezbollah.