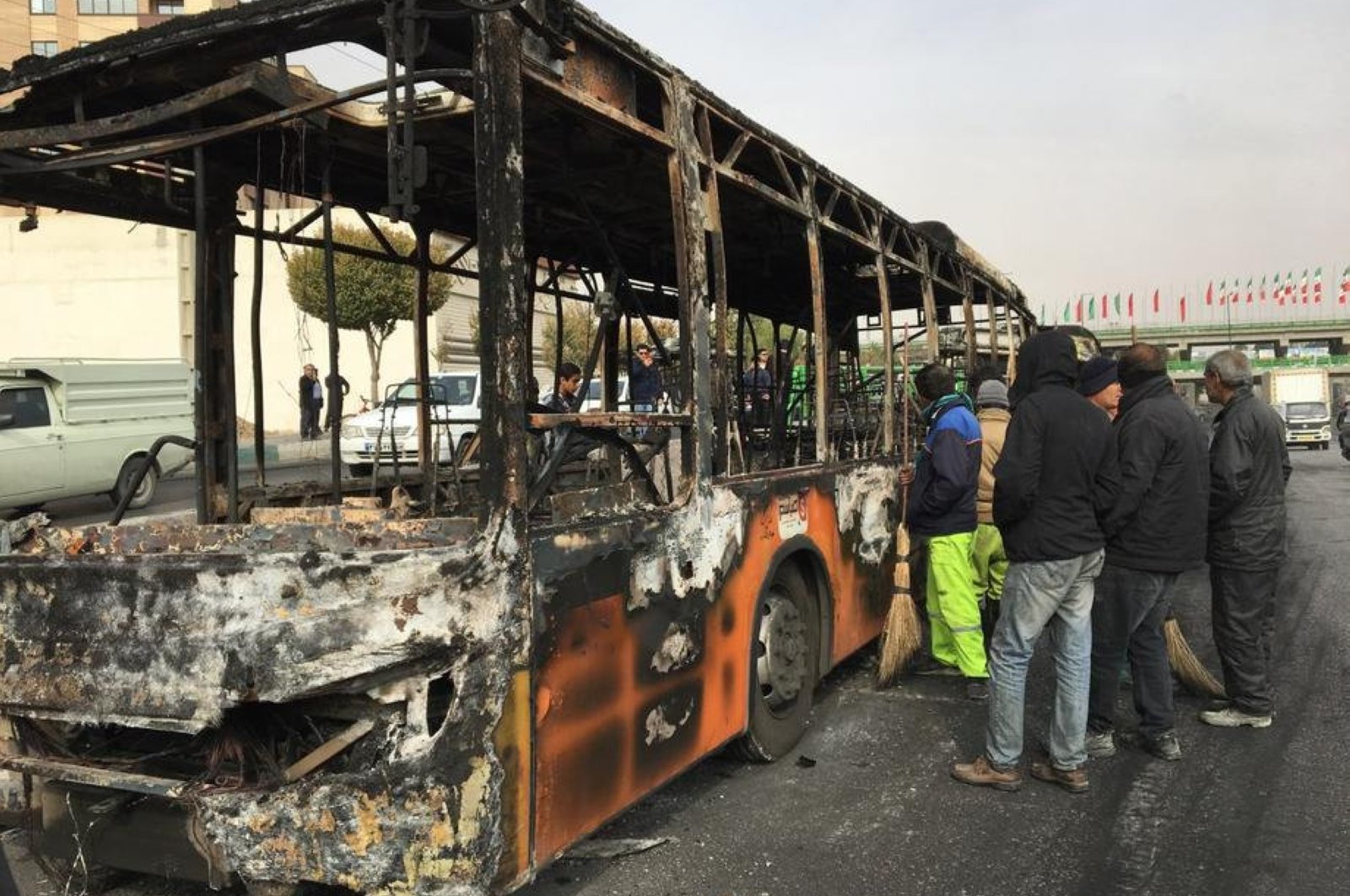 People gather around the wreckage of a public transportation bus that was burnt overnight during the protests over increasing fuel prices, Isfahan, central Iran, Nov. 17, 2019. (EPA-EFE Photo)
by French Press Agency - AFP
May 31, 2020 6:03 pm

Iran's interior minister has suggested that up to 225 people were killed in November protests sparked by a petrol price hike, ISNA news agency reported on Sunday.

Officials in Iran have yet to issue an overall death toll for the unrest, while London-based human rights group Amnesty International has put the number at more than 300.

The protests erupted on Nov. 15 in Tehran and rapidly spread to at least 100 cities and towns, with petrol pumps torched, police stations attacked and shops looted, before being put down by security forces amid a near-total internet blackout.

Officials had repeatedly denied death tolls given by foreign media and human rights groups as "lies" and passed the responsibility of reporting on it between different state bodies.

"Sad things happened. About 40 or 45 people, meaning around 20% of those killed, were shot with nonstandard issue weapons and martyred," said Interior Minister Abdolreza Rahmani Fazli.

"No armed confrontation with the people happened ... but when they attack a police station, they have to be confronted," ISNA quoted him as saying.

His breakdown indicated that, according to the government, between 200 and 225 people were killed in the violence.

According to Amnesty, at least 304 people were killed during the unrest.

A group of independent U.N. rights experts said in December that based on unconfirmed reports, more than 400 people could have been killed in the crackdown.

The experts said at the time that at least 12 of those killed were children.

They pointed to reports and footage apparently showing that security forces "not only fired live ammunition at unarmed protesters but also aimed at their heads and vital organs."

The United States has claimed that more than 1,000 were killed in the violence.

Iran has blamed the violence that broke out during the protests on "thugs" backed by its foes the United States, Israel and Saudi Arabia.

It has singled out exiled royalists and the People's Mujahedeen of Iran (MEK), an exiled former rebel group which it considers a "terrorist cult."

The minister said the petrol price hike had been "just an excuse" for creating chaos as foes had wanted a "civil war" in Iran.

He also defended the internet blackout, saying that the MEK, monarchists and the Daesh terror group were "giving military training through the internet."