Baghdad 'not happy' with US threat to pull troops, diplomats out of Iraq 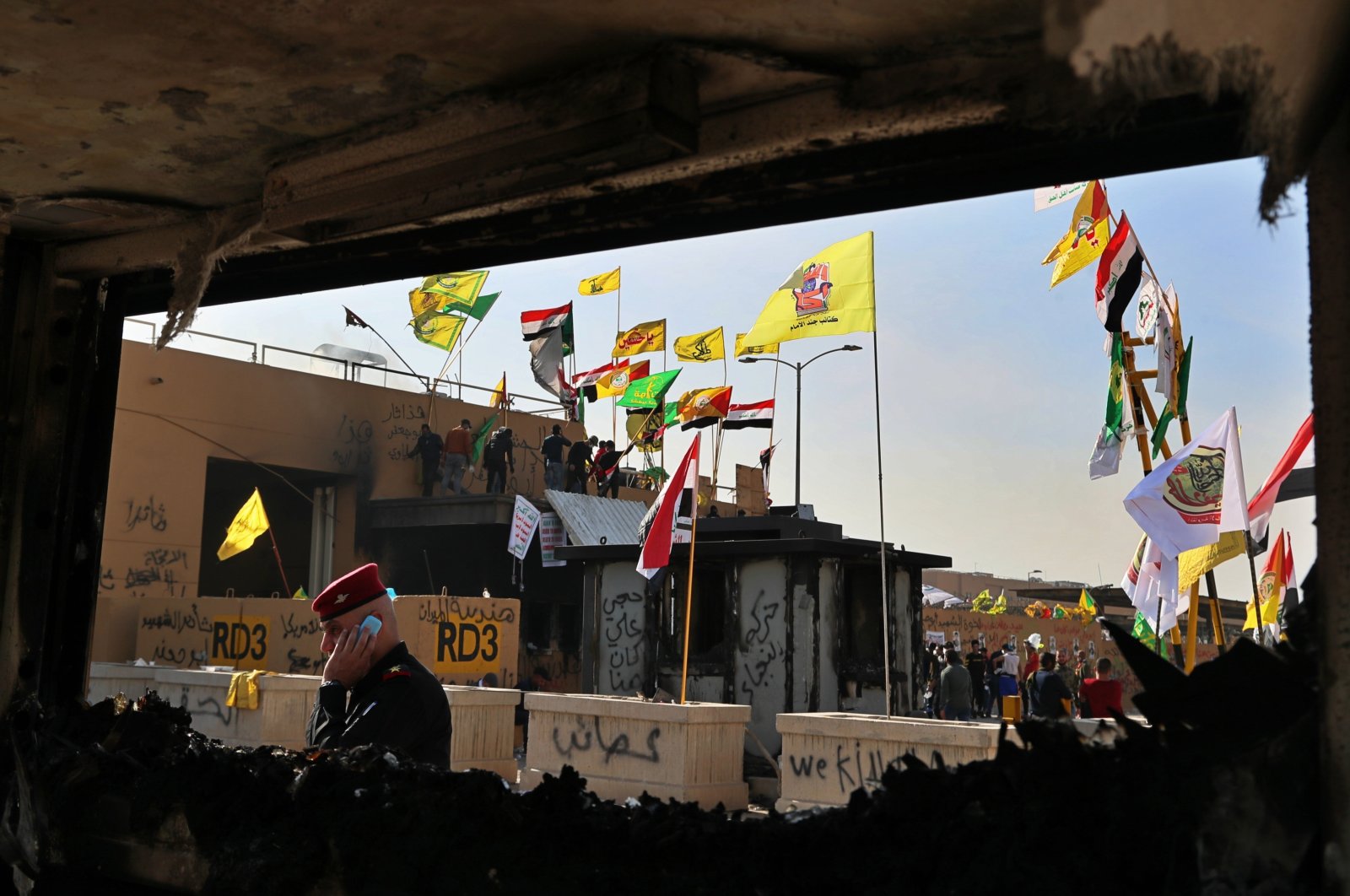 Pro-Iranian militiamen and their supporters are seen through a broken window of a burned checkpoint in front of the U.S. Embassy in Baghdad, Iraq, Jan. 1, 2020. (AP Photo)
by Agencies
Sep 30, 2020 1:58 pm

Baghdad is "not happy" with a "dangerous" threat by Washington to pull its troops and diplomats out of Iraq, Foreign Minister Fuad Hussein said Wednesday.

Earlier this week enraged by near-daily attacks on its interests in Iraq, Washington threatened to close its embassy in Baghdad, in a blow to a premier seen as a bulwark against Iran. The ultimatum was delivered in recent phone calls by U.S. Secretary of State Mike Pompeo to President Barham Salih and Prime Minister Mustafa al-Kadhimi.

In response to the embassy closure threats, the prime minister's spokesperson said in his weekly news conference Tuesday that the closure of any diplomatic mission would have detrimental consequences for regional security.

The country's prime minister said Wednesday that the government will protect foreign mission buildings and ensure only the state has weapons after Washington's threats.

"Iraq is keen on enforcing the rule of law, the state's monopoly on having weapons, protecting foreign missions and diplomatic buildings," Kadhimi told a meeting of 25 ambassadors and charges d'affaires, his office said in a statement.

"Those who carry out attacks on foreign missions are seeking to destabilize Iraq and sabotage its regional and international relations," he said.

Iraq has long been caught in a tug-of-war between its allies Iran and the United States, rendered rockier by Washington's "maximum pressure" policy against Tehran since 2018.

The U.S. still has hundreds of diplomats in its mission at the high-security Green Zone in Baghdad and around 3,000 troops based in three bases across the country. Since 2019, dozens of rockets and improvised explosives have targeted these sites, with U.S. and Iraqi officials blaming Tehran-backed factions including Kataib Hezbollah.

In recent weeks rocket attacks near the embassy have increased and roadside bombs targeted convoys carrying equipment to the U.S.-led military coalition. One roadside attack hit a British convoy in Baghdad, the first of its kind against Western diplomats in Iraq for years.

"These attacks do not target foreign missions alone but have hurt innocent citizens, including children," Kadhimi said.

"We expressed our deep concern at the rise in the number and sophistication of attacks against diplomatic premises in Iraq," the 25 diplomats said in a joint statement. "We welcome the actions that Prime Minister Kadhimi and his government have taken to address these concerns."

The new U.S. threats seem to have deepened the growing rift between factions loyal to Iran and those less willing to enter into a full confrontation with the U.S. After months of silence, Muqtada al-Sadr, head of the Saeroon bloc, took to Twitter this week to call for "the creation of a security, military and parliamentary committee to investigate" the rocket attacks. Within minutes, Kadhemi and other top government figures endorsed the recommendation.

"There's a consensus on condemning these attacks. Kataib Hezbollah and other hard-liners are isolated and left without political cover," an Iraqi official said.

Even the Hashed al-Shaabi slammed rocket attacks as "illegal military acts," denied involvement and formally sidelined a pair of commanders seen as too Tehran-leaning. But the hardliners, too, are organizing. A half dozen previously unheard-of groups have claimed responsibility for rocket attacks on the U.S. and even threatened the United Nations in recent months. Iraqi intelligence officials and political sources say Iran has been gathering the most hard-line among its Iraqi allies into these new formations.