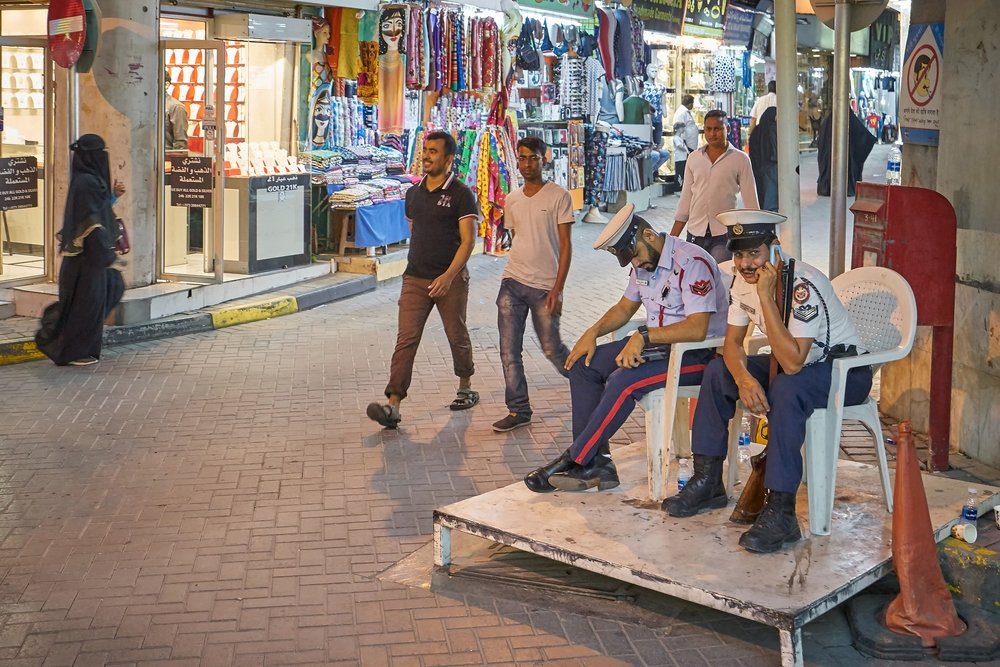 Policemen sitting at the shopping street in Manama during night, Bahrain, April 8, 2019. (Shutterstock Photo)
by REUTERS Mar 11, 2021 11:39 am
RECOMMENDED

Bahraini security forces have beaten children and threatened them with rape and electric shocks after detaining them in protest-related cases last month, the anniversary of a 2011 pro-democracy uprising, rights groups said on Wednesday.

A government representative did not comment on the specifics of the accusations in response to a Reuters query, saying in a statement that Bahrain took the protection of human rights "extremely seriously" and had a "zero-tolerance policy" of mistreatment in the justice system.

In a joint statement, Human Rights Watch (HRW) and the London-based Bahrain Institute for Rights and Democracy (BIRD) said about 13 children aged between 11 and 17 were held in early to mid-February as authorities tried to dissuade protesters from gathering to mark the 10th anniversary of the uprising.

"Five children, arrested on Feb. 14-15, said that police from the station beat, insulted, and threatened them with electric shocks from a car battery," the two groups said, quoting the children and their families. "An officer hit a 13-year-old on his head and threatened to rape him, give him electric shocks, and beat his genitals."

In some cases, the rights groups said, Bahraini police arrested children accused of burning tires or blocking a road on the day of their arrest. Police also accused children of vandalism, planting a fake bomb and throwing petrol bombs in November 2020, they added in the statement.

Four of the children remain in detention, including a 16-year-old with a serious medical condition, New York-based HRW and BIRD said. In a statement on Wednesday, Bahrain's attorney general directed the public prosecution to adopt the aims of law on corrective justice for children and their protection issued on Feb. 18 and intended to take effect six months later.

The government representative added that when dealing with those younger than 18, the decisions of the criminal justice system in the Gulf Arab nation weigh "each individual child's best interests, as well as their rehabilitation and place in society."

Bahrain's monarchy used force to suppress the 2011 uprising, led mostly by members of the Shiite Muslim majority and cracked down hard on sporadic unrest and dissent later.

It was the only Gulf state to experience one of the "Arab Spring" uprisings a decade ago. Mass trials followed and thousands were imprisoned, with many others fleeing abroad.

Subsequently, there have been clashes between protesters and security forces, who have been targeted by bomb attacks. Rights groups including Amnesty International have criticized the kingdom’s lack of an independent judiciary and accused its security forces of committing torture and other forms of ill-treatment with impunity. The government denies the charges.