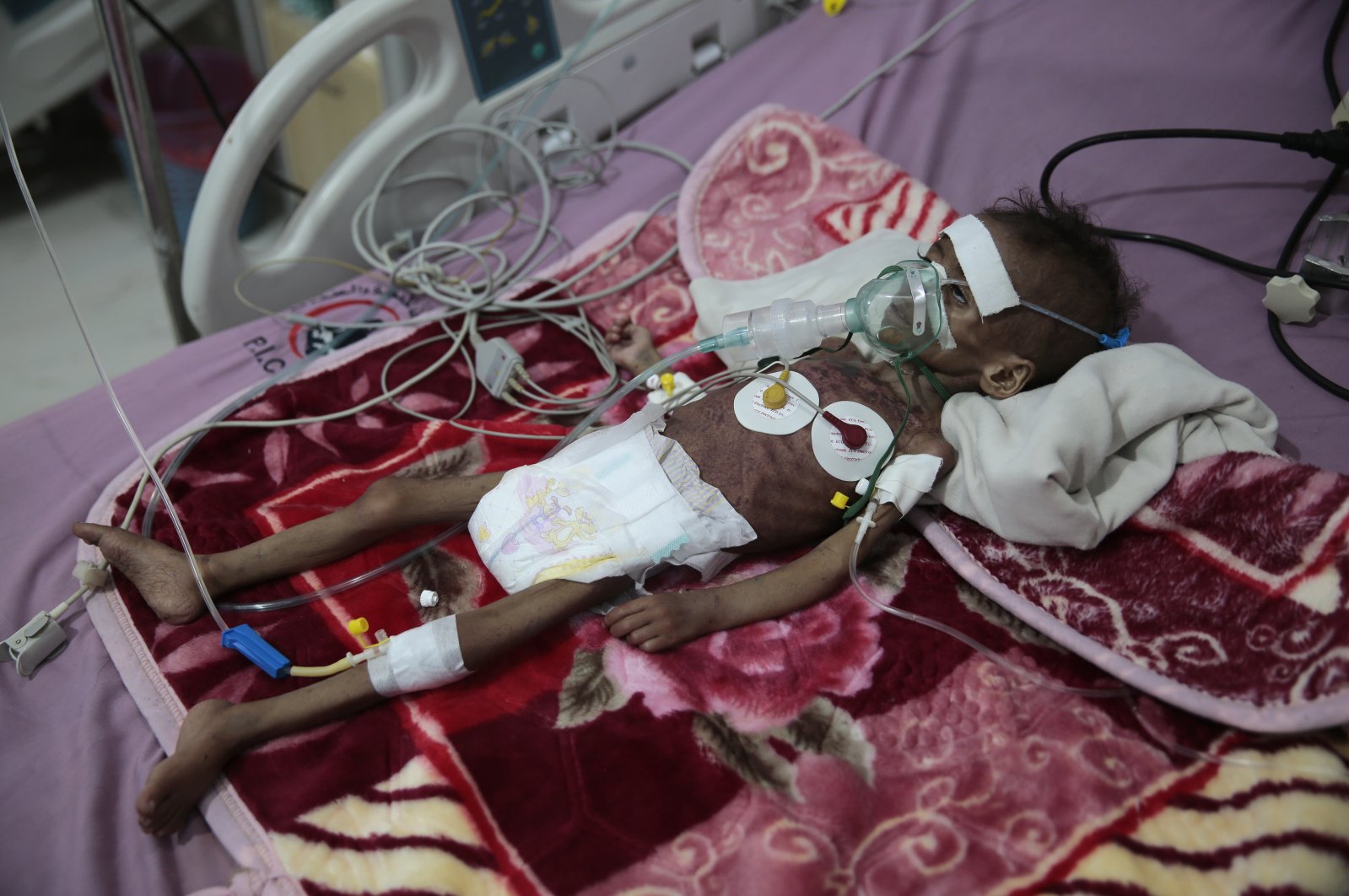 A malnourished girl, Rahmah Watheeq, receives treatment at a feeding center at Al-Sabeen hospital in Sanaa, Yemen, Nov. 3, 2020. Two-thirds of Yemen's population of about 28 million people are hungry, and nearly 1.5 million families currently rely entirely on food aid to survive. Another million people are set to fall into crisis levels of hunger before the end of the year, according to aid agencies working in Yemen. (AP Photo/Hani Mohammed)
by ASSOCIATED PRESS Dec 07, 2020 10:10 pm
RECOMMENDED

Yemen is "on the edge of a precipice” after years of civil war, a senior U.N. official has warned on Monday, with millions of children suffering from malnutrition and facing the risk of famine.

Ted Chaiban sounded the alarm about the worsening humanitarian situation as the United Nations Children's Fund launched an appeal for a record $2.5 billion in emergency funds from global donors.

As UNICEF's director for the Middle East and North Africa, Chaiban oversees an effort to assist children and families in a region hit hard by conflict, natural disaster and the coronavirus crisis. With some 39 million children in need of assistance, the Middle East alone accounts for 40% of the agency's $6 billion global appeal.

"The largest humanitarian emergencies in the world are in this region,” Chaiban said in an interview with The Associated Press. He spoke from Amman, Jordan.

The region includes some of the world’s most pressing humanitarian disasters – from Yemen, where years of conflict have left it on the brink of famine – to Sudan, which is coping with floods and an influx of refugees from Ethiopia as it emerges from years of civil strife.

Lebanon, meanwhile, is dealing with political paralysis, an unprecedented economic crisis and a large population of Palestinian and Syrian refugees as it tries to recover from a massive blast in its capital of Beirut in August. Syria continues to struggle with a civil war, now in its 10th year, which has displaced millions of people internally and scattered millions more as refugees.

Yemen, which plunged into chaos and civil war after Iranian-backed Houthi rebels captured the capital in 2014, may be the most challenging area for UNICEF. The agency estimates that virtually all of Yemen’s 12 million children require some sort of assistance. This can include food aid, health services, clean water, schooling and cash grants to help the poorest families scrape by.

"We are raising the alarm because we are on the edge of a precipice in Yemen,” Chaiban said, with some 2 million children "acutely malnourished” and 5 million people on the brink of famine.

He said efforts by the U.N. and nongovernmental organizations are keeping the country afloat.

"If that falls apart, then it all falls apart,” he warned. "There’s a train coming down the track. You know what the consequences of not acting is."

Education is the biggest component of the appeal, at $874 million, or more than a third of all spending. Chaiban said the already challenging task of educating children in war and disaster zones has become even more difficult due to the coronavirus. He estimated that 40% of the students UNICEF serves do not have sufficient access to the internet or computers to allow remote learning.

UNICEF has been working with governments and telecom companies and other partners to find "blended” solutions that include some in-person learning, putting content online and giving children increased access to technology.

Adding to the challenges is the coronavirus pandemic, which has stretched overwhelmed national health care systems and strained education systems.

Roughly $500 million, or one-fifth of the total appeal, is aimed at helping the region’s countries cope with COVID-19, the illness caused by the virus. Much of that money will be spent to ensure that children can continue to study. Supporting health and clean-water programs are also critical.

Chaiban said UNICEF is working closely with Covax, an ambitious global project to procure and safely deliver vaccines to the world’s poorest people. The agency is promoting educational campaigns so people understand the vaccination process for themselves and their children.

He said that one of the region’s few bright spots is Sudan, which is emerging from years of internal conflict and is attempting to transition to democracy. The country still faces great challenges, from floods to the arrival of over 40,000 Ethiopian refugees to lingering hostilities.

But Chaiban described Sudan as a "place of hope” and said the world should invest in its health and education systems and promote reconciliation there.

"We really have an opportunity to move beyond what has been the traditional narrative in Sudan,” he said. "These kinds of opportunities in the Middle East and North Africa ... do not happen very often.”

Last year, UNICEF appealed for some $2 billion in emergency assistance for the Mideast but only was able to raise about half of that. It runs operations in other troubled places such as Egypt, Iran, Iraq, Libya, Jordan and the Palestinian territories.

With the global economy in recession and governments scrambling to take care of their own populations, the agency faces an even more daunting challenge this year but Chaiban said the cost of inaction will be even higher.

"If we are able to continue with the response. We can avoid the worst,” he said.