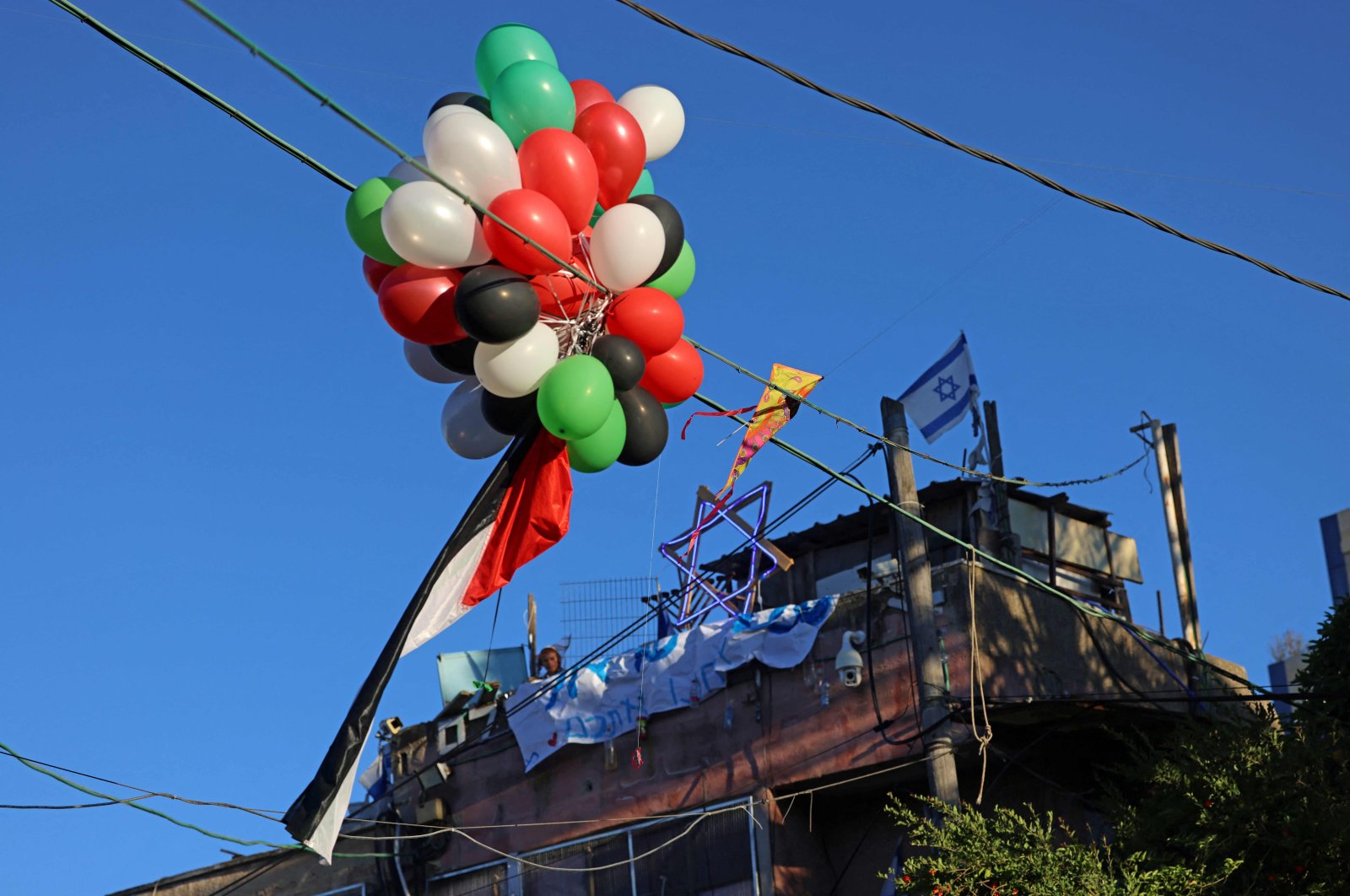 A Palestinian flag attached to balloons is seen installed in front of the house of an Israeli settler on the 73rd anniversary of the nakba, the "catastrophe," of Israel's creation in 1948, Sheikh Jarrah, East Jerusalem, occupied Palestine, May 15, 2021. (AFP Photo)
by Anadolu Agency May 15, 2021 8:36 pm
RECOMMENDED

Palestinians marked the anniversary of the defeat that stripped them of their homes and land Saturday, at a time when their persecution has been ramped up to full force as the whole world watches.

It has been 73 years since the "nakba," or "catastrophe," occurred, and this year Palestinians are marking the occasion amid Israeli attacks on occupied lands. Observed on May 15 annually, the nakba marks the 1948 forced expulsion of nearly 800,000 Palestinians from their homes in historical Palestine.

Seventy-three years ago, hundreds of thousands of Palestinians were forced to leave their villages and towns in historical Palestine to neighboring countries like Jordan, Lebanon and Syria. Other Palestinians found themselves displaced to the Gaza Strip and West Bank amid rising attacks by Zionist gangs paving the way for the creation of the state of Israel.

Despite their decades of suffering, Palestinians still continue to affirm their right to return to their homes and villages in historical Palestine and have put forward ways to achieve this.

The Palestine-Israel conflict dates back to 1917 when the British government, in the now-famous Balfour Declaration, called for "the establishment in Palestine of a national home for the Jewish people.”

According to the Palestinian Central Bureau of Statistics (PCBS), the nakba resulted in the displacement of nearly 800,000 Palestinians out of 1.4 million Palestinians who lived in historical Palestine in 1948 in 1,300 villages and towns.

On the other hand, Palestinians today are exposed to unprecedented oppression and attacks by Israel in their homeland.

Israeli airstrikes on Gaza since May 10 killed at least 139 people, including 39 children and 22 women, injuring 950 people.

The air raids on Gaza were preceded by days of tensions and Israeli aggression in occupied East Jerusalem, where hundreds of Palestinians were assaulted by Israeli forces, who also targeted settlers at the Al-Aqsa Mosque and in the Sheikh Jarrah neighborhood.

Tensions spread from occupied East Jerusalem to Gaza after Palestinian resistance groups vowed to retaliate against Israel if it did not cease its attacks.

The 1948 Arab-Israeli War, which took place at the same time as Israel's establishment, did not alleviate the suffering of the Palestinians and could not stop the occupation of their lands and expulsion.

The U.N. General Assembly (UNGA) approved a resolution on Nov. 29, 1947, which required the division of Palestine into a Jewish and a Palestinian state. While Arab countries, especially Palestinians, opposed the decision, the Zionists welcomed it.

The day after the partition decision, the armed Jewish Haganah units, founded by the Zionists, took over the areas prepared for the Jewish to reside.

As soon as the British mandate was over in Palestine, armed organizations announced the establishment of Israel, formally proclaimed by David Ben Gurion on May 14, 1948.

Following the events, the Arab League formed a joint army with forces from various countries under the leadership of a Syrian commander to help the Palestinians against the attacks of armed Zionist gangs.

Despite being weak in terms of weapons and equipment, these troops regained control over the Palestinian territories captured by armed Zionist gangs.

As a result of the clashes, the first cease-fire was reached on June 11, 1948, with the decision of the U.N. Security Council (UNSC).

Both parties agreed to keep their positions in place and pledged not to increase the number of soldiers and forces fighting under the cease-fire.

would not go beyond their positions and not increase the number of soldiers and forces fighting.

With this decision, Palestinians and Arab troops remained tied to the cease-fire and clashes in the region stopped for four weeks.

However, violating the cease-fire, Israel increased its military power during the four-week-truce.

In short, the cease-fire reached through international intervention led to balances in Israel's favor.

States such as the U.S. and Britain, which ignored Israel's cease-fire violations, also prevented Arab countries from acquiring weapons and equipment.

Israeli forces captured cities one by one after the first cease-fire and before a second cease-fire was declared by the UNSC on July 15, 1948. Despite the cease-fire, Israel continued its attacks.

The UNSC passed a decision on Dec. 29, 1948, ending the war. The Arab countries, which had advanced into the Palestinian territories at first, withdrew from the lands in favor of Israel.

The war between the Arab countries and Israel could not prevent the Israeli occupation of Palestine.

The declaration of the establishment of an independent Israel in the historic Palestinian territories on May 14, 1948, marked the beginning of a series of disasters for Palestinians that would ensue for decades.

Most Palestinian lands were eventually occupied and thousands of Palestinians have been killed in systematic massacres.