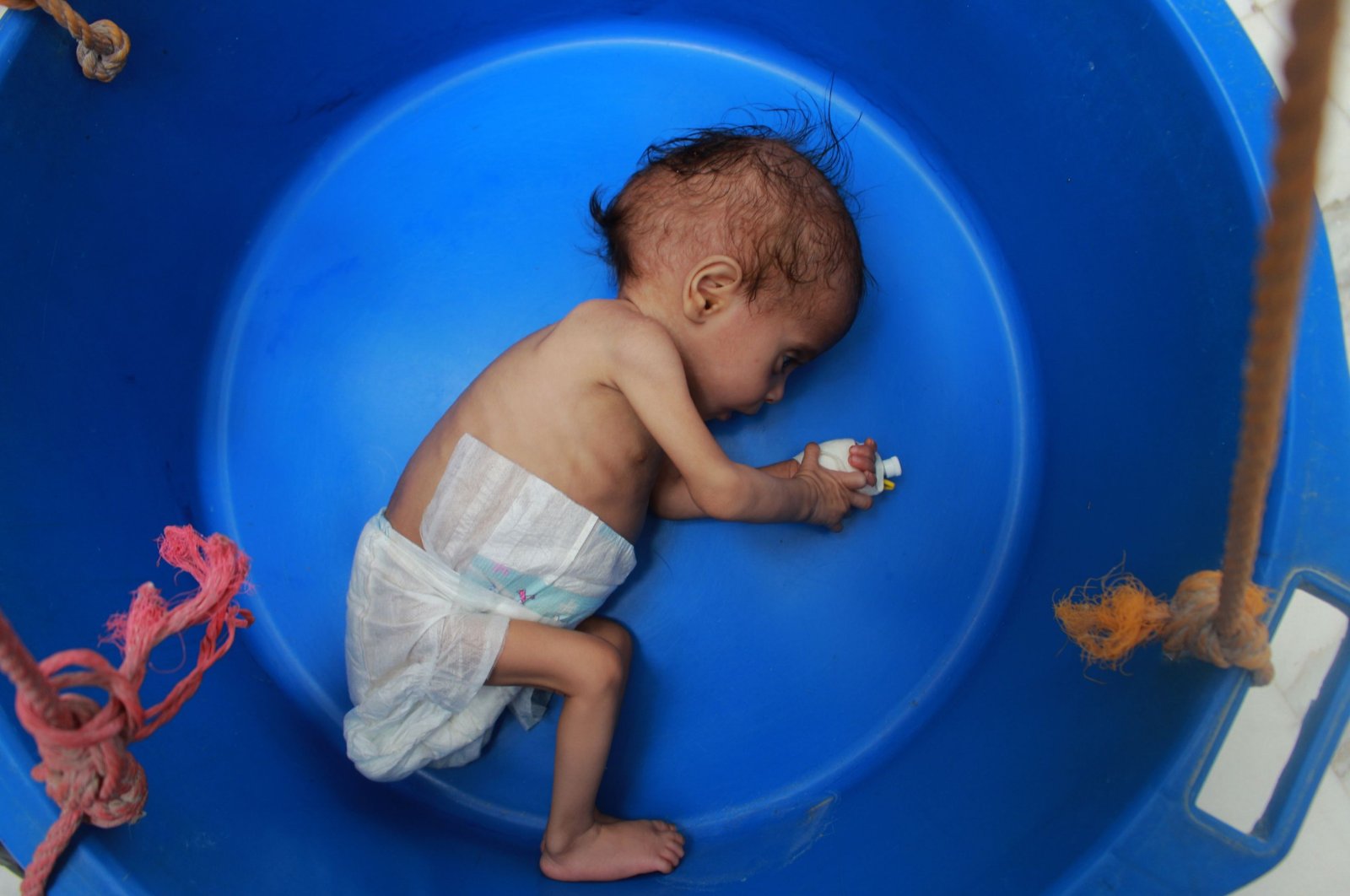 A Yemeni child suffering from malnutrition is weighed at a treatment center in Yemen's northern Hajjah province, July 5, 2020. (AFP Photo)
by Compiled from Wire Services
Oct 27, 2020 11:14 am

Malnutrition among young children has soared to the highest levels ever recorded in parts of war-torn Yemen, the U.N. said Tuesday, as coronavirus and shortfalls in aid funding worsen a humanitarian crisis.

More than half a million cases of acute malnutrition among children under five were recorded in the south, and the results of a survey of the north currently underway are expected to be "equally concerning," it said.

A 15.5% increase in severe malnutrition in the age group has left at least 98,000 at "high risk of dying" unless they receive urgent treatment, the Food and Agriculture Organization of the United Nations (FAO), the World Food Programme (WFP) and the United Nations Children's Fund (UNICEF) said in a statement.

"The data we are releasing today confirms that acute malnutrition among children is hitting the highest levels we have seen since the war started," said Lise Grande, the U.N.'s humanitarian coordinator for Yemen.

"We've been warning since July that Yemen is on the brink of a catastrophic food security crisis. If the war doesn't end now, we are nearing an irreversible situation and risk losing an entire generation of Yemen's young children. The data we are releasing today confirms that acute malnutrition among children is hitting the highest levels we have seen since the war started," she said.

The analysis has shown a 10% rise in cases of acute malnutrition in 2020 in only 133 districts in the southern parts of Yemen, where around 1.4 million children under the age of five live.

While it has been estimated that at least a quarter of a million pregnant or breastfeeding women are also required treatment for malnutrition, U.N. experts warned that the real number is much higher due to the worsening situation within the country in 2020 amid economic decline and the overwhelming impact of the COVID-19 pandemic.

"For the past two years, we've been able to roll-back the worst famine in a generation," Grande told Agence France-Presse (AFP). "We've done this by providing massive amounts of humanitarian assistance and working with authorities to stabilize the economic factors driving the crisis. It's heart-breaking that when people need us the most, we can't do what's necessary because we don't have funding.”

Yemen, which since 2014 has been gripped by a war between Iran-backed Houthi rebels and a beleaguered government which is supported by a Saudi-led military coalition, has sunk into the world's worst humanitarian crisis.

More than 24 million people, nearly 80% of the population, depend on some form of aid for survival, and this year the situation has deteriorated sharply.

"Escalating conflict and economic decline, plus the overwhelming impact of the COVID-19 pandemic, has pushed an already exhausted population to the brink," the U.N. said, adding that aid programs including emergency food assistance have been disrupted as funds dry up.

Only $1.43 billion of the $3.2 billion needed to fund Yemen aid projects had been received by mid-October.

In September, the U.N. said that critical aid had been cut at 300 health centers and more than a third of its major humanitarian programs had been reduced or shut down entirely.

Several Arab donors, including Saudi Arabia, have failed to deliver on their aid pledges, a U.N. official told the Security Council at the time, as donors face their own economic troubles amid the coronavirus crisis.

"The lives of thousands of children and women are at stake," said Philippe Duamelle, UNICEF Representative in Yemen. "Acute malnutrition can be treated and prevented with a package of key services but for that, we need urgent action and support. A great sense of urgency should prevail in making the necessary financial resources available and ensuring access to children and women in dire need of assistance."