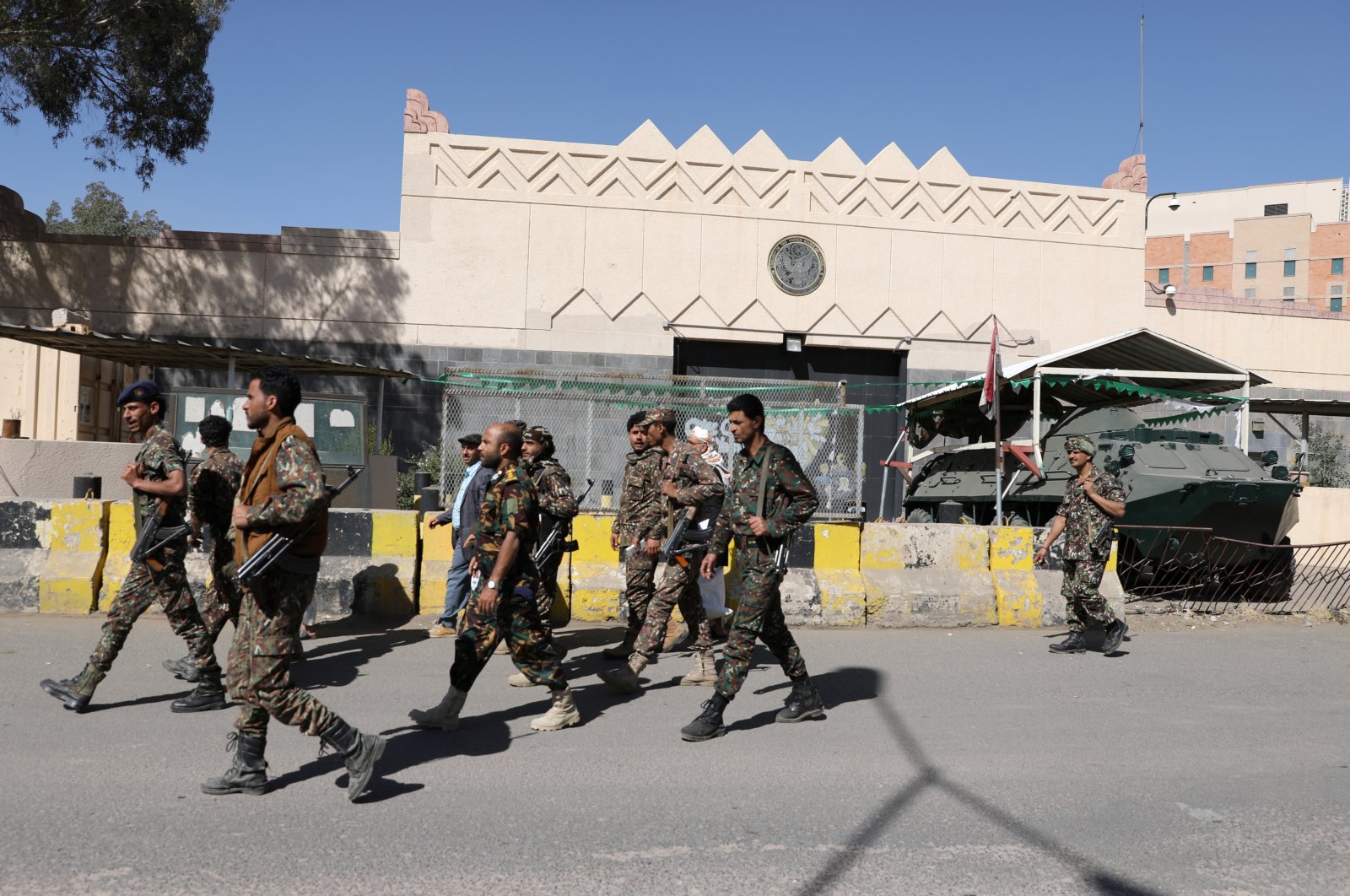 Houthi soldiers walk past the U.S. embassy's gate following a demonstration against the United States over its decision to designate the Houthis as a foreign terrorist organization, in Sanaa, Yemen on Jan. 18, 2021. (Reuters Photo)
by French Press Agency - AFP Jan 18, 2021 2:06 pm
RECOMMENDED

Some 150 Yemeni pro-government soldiers and Houthi rebels have been killed in a week of fighting south of the strategic port city of Hodeida, military sources said Monday.

Impoverished Yemen is mired in a devastating conflict between Iran-backed Houthi rebels and government forces backed by Saudi Arabia that has left tens of thousands dead and sparked a dire humanitarian crisis.

The latest clashes in the Red Sea port city of Hodeida are the most violent since a truce negotiated in the area by the United Nations came into force in 2018.

The rebels, who hold Hodeida, have attacked to the south of the city where pro-government forces maintain positions, pro-government military sources said.

"The toll for losses on the two sides has reached around 150 dead and 260 wounded," an official of the pro-government forces told Agence France-Presse (AFP).

The toll was confirmed by a local official on the rebel side. The clashes had so far not resulted in any territorial gains for the rebels, residents said. After fierce fighting on Saturday and Sunday, the intensity of clashes cooled early Monday.

Pro-government forces have suffered 27 fatalities and killed 44 rebels in countering "several assaults" by the rebels, two other pro-government sources said. Medics and rescue workers said that military fatalities on the two sides had reached a total of 70 between Saturday and Sunday.

Aid group Doctors Without Borders said on Twitter that its team in the Mocha Trauma Hospital was engaging a "mass casualty plan" to respond to an influx of wounded.

"We are intensely worried for civilians living near the frontline areas," it added, noting "intense fighting" along the southern Hodeida frontlines. It was not clear whether the latest bout of fighting had so far caused civilian casualties. In early January, five women were killed by a shell when it hit a wedding hall near Hodeida airport, located on the frontline.

Yemen's war has killed tens of thousands, displaced millions and, according to the U.N., left 16 million on the brink of famine. U.N. and EU officials and aid groups have warned of a worsening humanitarian crisis after outgoing U.S. President Donald Trump's administration classified the Houthi rebels "terrorists." The designation is expected to halt many transactions with Houthi authorities, including bank transfers and payments to medical personnel and for food and fuel, due to fears of U.S. prosecution.