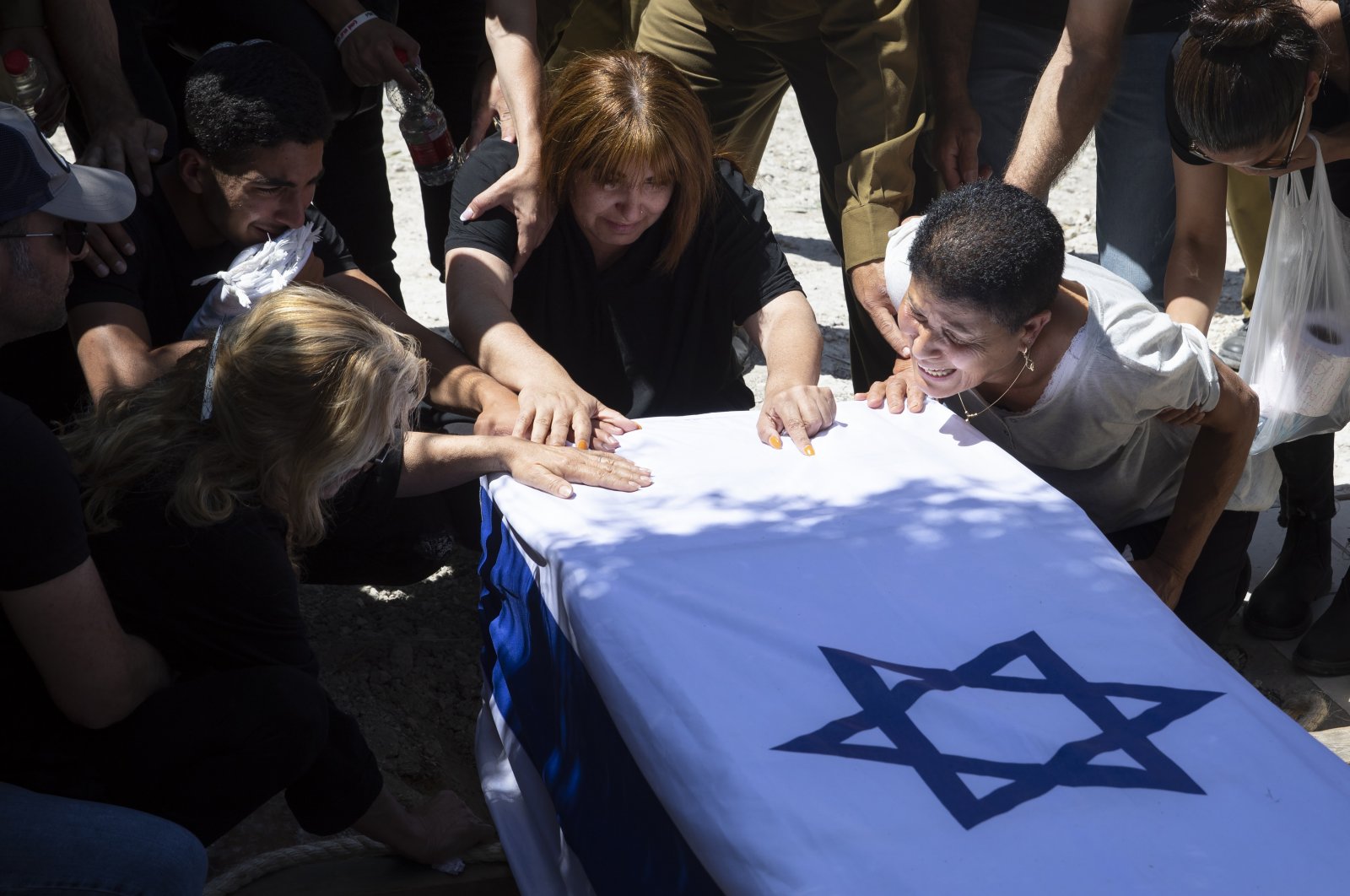 Relatives of Israeli soldier Omer Tabib, 21, mourn during his funeral at the cemetery in the northern Israeli town of Elyakim, Thursday, May 13, 2021. (AP Photo)
by DAILY SABAH WITH AGENCIES May 14, 2021 5:07 pm
RECOMMENDED

An Israeli soldier who became the first casualty of the Israeli Defense Forces (IDF) during the latest round of violence against the Palestinians had previously boasted about raping a Palestinian woman in a social media post, revealing yet another dirty chapter in the decadeslong conflict.

Staff Sgt. Omer Tabib, 21, was killed in an anti-tank missile attack near the Gaza Strip Wednesday, marking the first Israeli military death in the recent clashes sparked by Israeli plans to unlawfully evict Palestinians from their homes in Sheikh Jarrah neighborhood in East Jerusalem.

As Israeli forces and far-right groups attacked the Haram al-Sharif complex housing the Al-Aqsa Mosque during Ramadan, protests and clashes soon spread to other parts of the occupied Palestinian territories including the Gaza Strip. In response, Palestinian resistance groups based in the long blockaded strip started launching rocket attacks against Israel, killing eight people, including civilians. Israel stepped up its violence and struck various targets in Gaza, killing over 120 people, with children constituting a quarter of fatalities, in addition to more than 500 injured.

Israeli authorities blamed Hamas for the attack that killed Tabib and critically wounded another soldier. A third officer was moderately injured. The military wing of Hamas had earlier announced it had targeted an Israeli military jeep across from northern Gaza with a missile and released a video of the attack.

However, as the IDF broke the news on Twitter, social media users were quick to look for information surrounding Tabib. A disturbing revelation came from Talib's own Twitter account @OmriBenLulu, in which he claimed to have raped a Palestinian woman in a post dating back to Aug. 8, 2019.

It is not clear whether Tabib actually assaulted a Palestinian woman or "joked" about it, seemingly in response to a pro-Palestinian account's offensive post accusing him and other soldiers in the IDF of doing drugs and being "child murderers" and "baby killers."

It is also not clear whether the IDF, where Tabib was serving as part of his compulsory military service when he posted the tweet, launched an investigation on Tabib's post.

On Thursday, Tabib was laid to rest in his northern Israeli hometown of Elyakim, which is mainly populated by people of Yemeni Jewish descent. Hundreds of locals and IDF personnel took part in the funeral ceremony for Tabib, who was reportedly weeks away from his discharge.

The @OmriBenLulu account's tweets are currently protected, and the account seems to have been hacked by figures hostile to him.

Following the attack, Israeli newspaper Haaretz reported on a preliminary army probe that found the vehicle was using a road not suitable for the military since it is exposed toward the Gaza Strip.

IDF spokesperson Hidai Zilberman, who was quoted by the Times of Israel newspaper, said the soldiers behaved incorrectly by parking their jeep where they did. However, the same report also included the remarks of IDF Southern Command Maj. Gen. Eliezer Toledano, who said the attack was a result of the battle and topography.