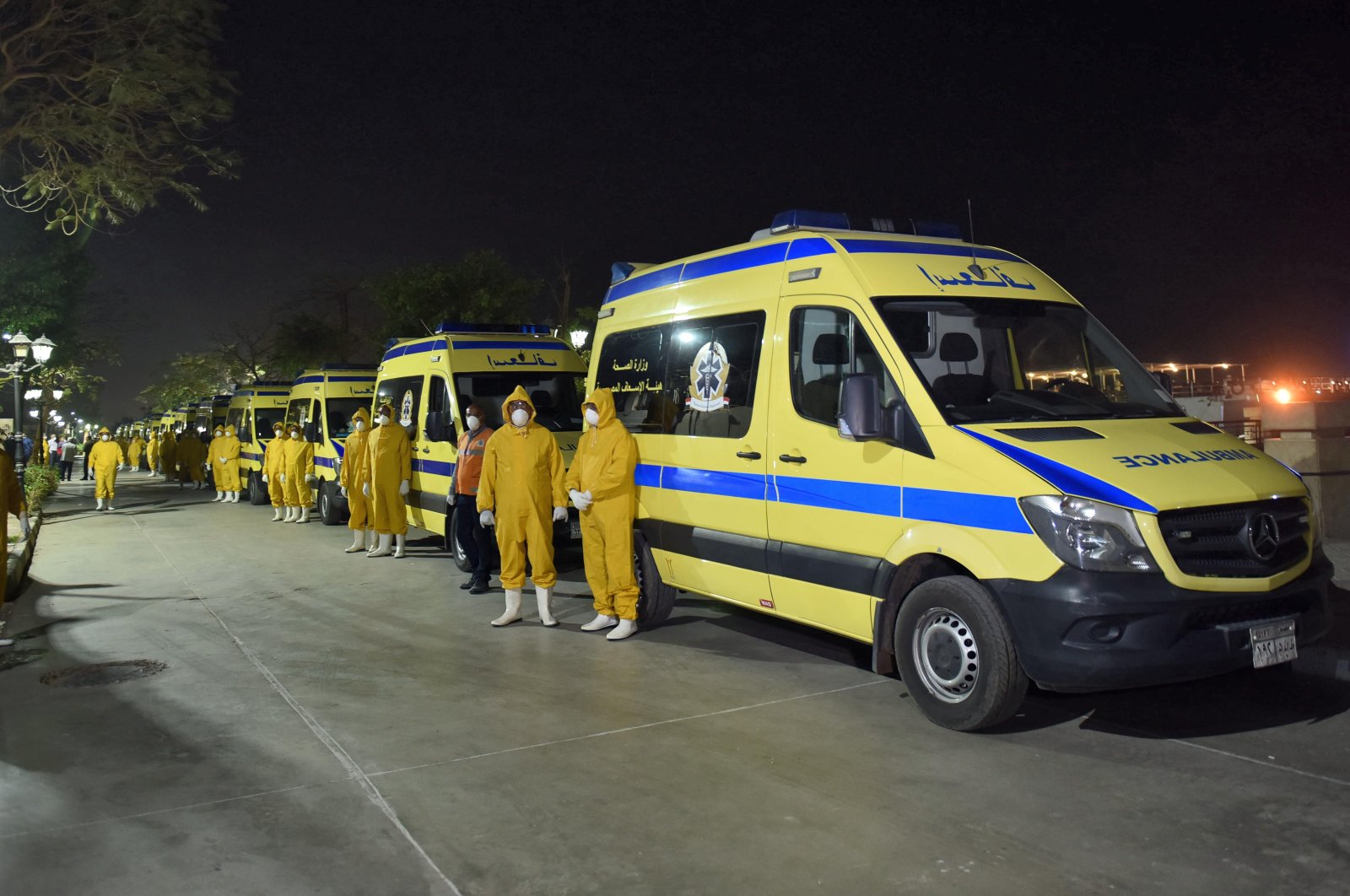 Egyptian health ministry emergency responders stand next to ambulances ready on the scene to transport suspected COVID-19 coronavirus disease cases that were detected on a Nile cruise ship, in the southern city of Luxor late on March 7, 2020. (AFP Photo)
by Compiled from Wire Services Mar 08, 2020 9:46 pm
RECOMMENDED

A German tourist died Sunday of the novel coronavirus in a Sinai resort of eastern Egypt, the health ministry announced, the first death from the epidemic recorded in Africa.

"The 60-year-old German citizen showed symptoms of a fever (and) checked into Hurghada hospital on 6 March," before testing positive for COVID-19, it said in a statement.

The tourist, who arrived from Germany a week ago, died after having refused to be transferred to an isolation ward until March 7 once his breathing had been affected by "acute pneumonia."

On Saturday, the health ministry announced 45 suspected cases of Egyptians and foreigners contracting the virus aboard a Nile cruise ship.

Besides the cruise ship cases, Egypt has detected three cases of the virus, the first of which was announced on Feb. 14.

The health ministry said last week that the first patient, a Chinese national, had recovered and been released.

The other two cases, a Canadian working in an oil company and an Egyptian who returned from Serbia through France, were still undergoing treatment.

Other countries, including France, have announced that six travelers returning from Egypt had tested positive for the virus.

The total number of confirmed coronavirus cases climbed to 54 so far, according to health officials.

49 deaths in a single day in Iran

In Iran, 49 new fatalities were registered Sunday, taking the death toll there to 194 as the virus continued to spread throughout the Middle East.

As many as 6,566 people are infected in Iran, a jump of 743 compared to the previous day, Health Ministry spokesman Kianush Jahanpur said Sunday.

Some 1,800 people have the virus in the capital Tehran alone.

The spokesman urged Iranians not to travel to the provinces and to stay home to avoid unleashing a new wave of infections.

His warning came as millions of Iranians plan trips to the provinces to celebrate Persian new year.

Police have set up roadblocks on motorways and main roads to almost all of the country's provinces. People can still travel to Tehran, however.

Jahanpur added that 2,134 patients have recovered from the virus and been released from the hospital.

Although Iran's authorities are trying to avoid using the word, these measures are in effect a quarantine.

Saudi Arabia Sunday quarantined its eastern Qatif area in an attempt to curb the coronavirus outbreak, according to local news reports.

All cases of the novel coronavirus detected in the country are from Qatif, the state-run Saudi Press Agency (SPA) reported, citing an official from the country's Health Ministry.

While precautionary measures were increased in the quarantined city, work was suspended in public and private institutions other than health centers, pharmacies, fuel stations and security forces.

Entry and exit were temporarily halted in the region, though commercial and food transportation will continue, the SPA underlined.

Also, the Ministry of Education announced that education was suspended in Qatif for two weeks due to COVID-19.

In a written statement, the Health Ministry said the number of cases in the country had increased to 11.

First detected in Wuhan, China in December, the virus, officially known as COVID-19, has spread to more than 80 countries.

The global death toll is nearly 3,500, and over 100,000 confirmed cases, according to the World Health Organization (WHO).

After declaring the outbreak an international health emergency in January, last month the WHO updated the global risk level to "very high."