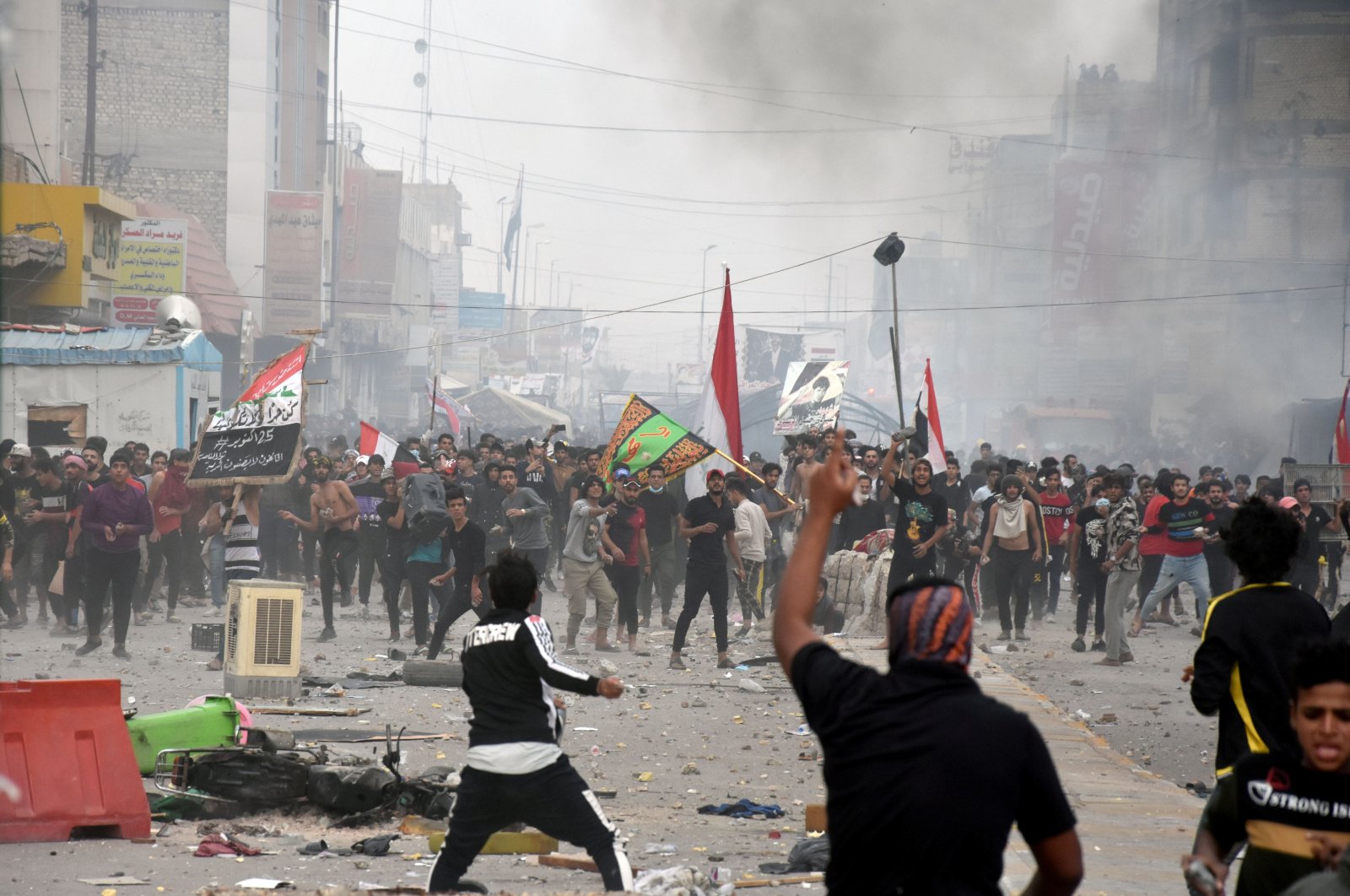 The violence erupted as tens of thousands of Sadr supporters hit the streets of Baghdad and the southern city of Nasiriyah in a show of force as preparations ramp up for June parliamentary elections.

Their turnout overshadowed the rival youth-dominated movement that had erupted in October 2019 but had petered out in recent months due to geopolitical tensions and the coronavirus pandemic.

Prime Minister Mustafa al-Kadhemi has called for early polls to take place in June 2021, nearly a year ahead of schedule, to fulfill a key demand of last year's protest movement, which also included Sadr supporters.

On Friday, followers of the cleric attacked a tent camp of anti-government protesters in Nasiriyah's Habboubi Square, said Mohammad al-Khayyat, a leader of the anti-government movement.

"Sadrists armed with guns and pistols came to try to clear our tents. We fear that more violence could take place," Khayyat told Agence France-Presse (AFP).

Medical sources told AFP that the violence had left four people dead and wounded 51 others, nine of them by gunfire.

An AFP reporter saw the torched remnants of the anti-government camp in Habboubi, where chaos reigned.

In the evening, clashes continued with an AFP correspondent reporting that many of the demonstrators' tents had been set on fire.

Nasiriyah was a major hub for the anti-government protest movement that erupted in October 2019.

It was also the site of one of the bloodiest incidents of the uprising nearly one year ago on November 28, when more than three dozen died in protest-related violence.

The deaths sparked outrage across Iraq, including by the country's top Shiite authority Grand Ayatollah Ali Sistani, and prompted the resignation of then prime minister Adel Abdel Mahdi.

Kadhemi's plan to hold early elections is seen as an effort to reach out to protesters.

The polls will take place under a new electoral law agreed by parliament that will see district sizes reduced and votes for individual candidates replacing list-based ballots.

Most observers expect a delay of at least a few months while political parties prepare their campaigns, but experts say the new system is likely to benefit Sadr and his candidates.

Sadrists had already won big in the May 2018 vote with 54 of parliament's 329 seats, granting him the biggest single bloc.

In a tweet this week, Sadr said he expected major wins in the new elections and would push for the next prime minister to be a member of his movement for the first time.

He also called for a protest on Friday, prompting tens of thousands to turn out in Baghdad, and in other Iraqi cities including Al-Hillah and Basra in the south.

In the capital's Tahrir Square, they gathered shoulder-to-shoulder despite the COVID-19 pandemic for the noon Muslim prayers and spilled out into the surrounding streets.

Most of al-Sadr's followers stood unmasked in the square, chanting: “Yes, yes for our leader,” in support of the firebrand cleric as Iraq remains a high-risk country for COVID-19 infection.

More than 12,000 people have died of the virus in Iraq amid 544,000 confirmed cases, according to Health Ministry figures. Daily infection rates average 2,400 cases per day, but health workers say the number may be higher as many Iraqis with symptoms choose to stay home and avoid going to hospitals to get tested.

Iraq has the second-highest outbreak and number of deaths in the region after Iran.

In a sermon read out by the cleric's representative, the leader called for a "Sadrist majority" in parliament.

Sadr is very rarely seen in public and did not attend the rally.

"This is a protest against the corrupt, the oppressors, who have driven Iraq to brink of bankruptcy, to the brink of the abyss," said Talal al-Saadi, a cleric who was among those protesting on Friday.

Iraq is facing its most dire fiscal crisis in decades following a collapse in oil prices earlier this year and the economic impacts of the COVID-19 pandemic, with the government unable to pay public sector salaries on time.

On Friday, Sadr supporters carried Iraq's national tricolor and posters of the cleric, including some that evoked his past as a militia leader and showed him in camouflage.

Volunteers dressed in light blue, the movement's colour, sprayed the crowd with disinfectant.

"Obeying Sadr's call, we're making a stand that the whole world will see -- we don't want criminals or corrupt people in Iraq," said protester Ahmad Rahim, with an Iraqi flag draped around his shoulders.

"We call the shots," he added.