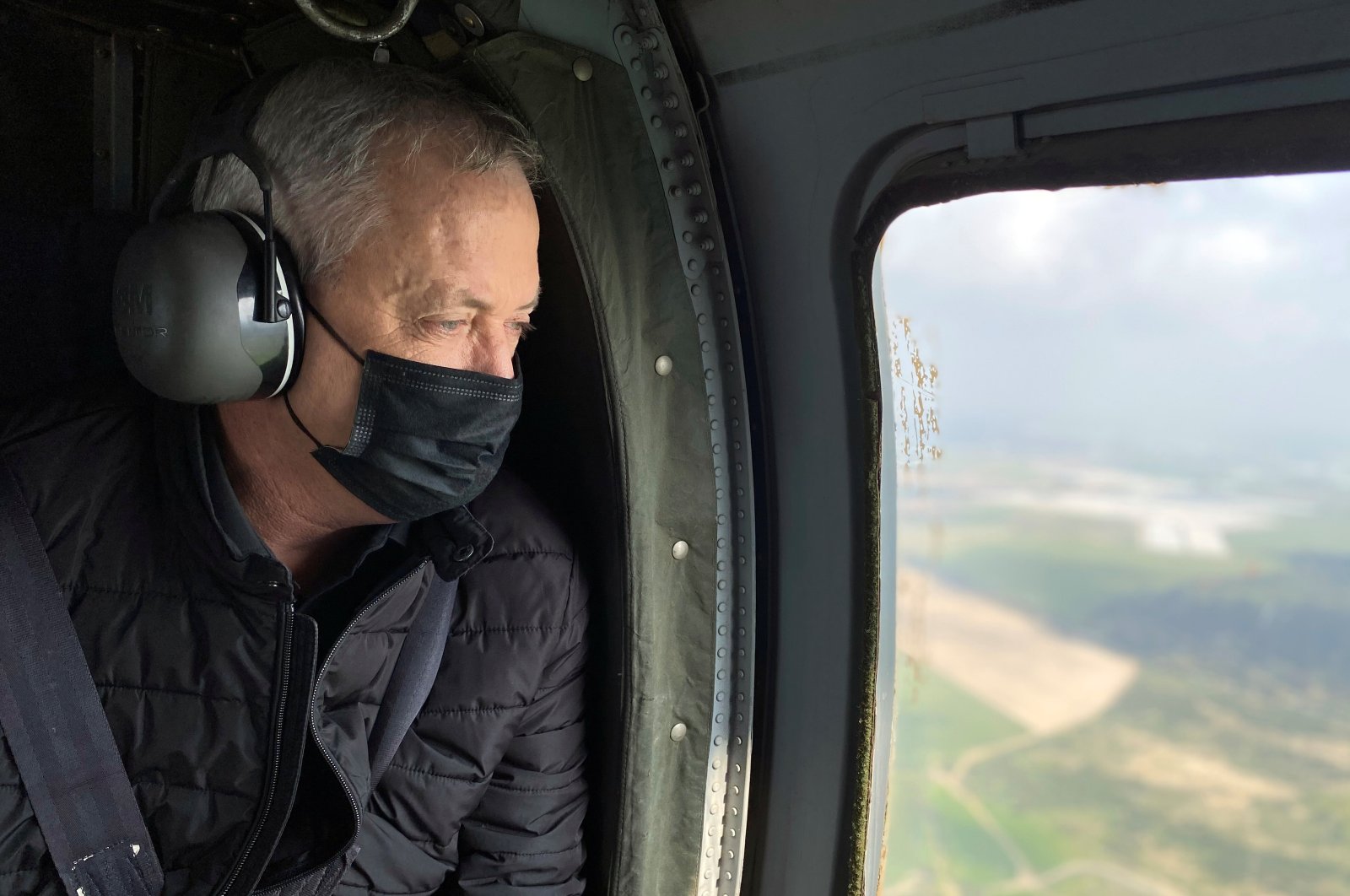 Israeli Defence Minister Benny Gantz wears a face mask as he looks out from the window of a helicopter during a tour of the Gaza border area, southern Israel, March 2, 2021. (Reuters Photo)
by Agencies Mar 05, 2021 3:43 pm
RECOMMENDED

Israel’s defense minister says his country has drawn up plans to strike Iranian targets if Tehran shows signs of nuclear escalation. Benny Gantz told Fox News that Israel is still working on its plans, but "we have them in our hands of course." He showed a map of Lebanon that he said includes ground forces, missiles and launching sites set up by Iranian proxy forces along the border.

"This is a target map. Each one of them has been checked legally, operationally, intelligence-wise and we are ready to fight," Gantz said, according to release in quotes carried by The Associated Press (AP).

The remarks come as President Joe Biden’s administration considers rejoining the 2015 Iran nuclear deal to limit Iran's nuclear program, with some changes to toughen curbs on Tehran's activities. Former President Donald Trump canceled the U.S. membership in the atomic accord and imposed sanctions instead.

"The Iranian nuclear escalation must be stalled," Gantz said, repeating the Israeli government's approach to the new administration on the issue.

"If not, we must stand independently and we must defend ourselves by ourselves."

On a visit to an Israel-Gaza border crossing, the minister played down a report by public radio Kan that Israel was considering a defense agreement with Gulf Arab countries, but said security ties would be pursued.

"We have this process of setting up (a) special security arrangement, and within this arrangement, we can continue and develop our relations," he said. Gantz declined to go into details on what such an arrangement would entail.

He signaled that Israel had no opposition to the sale, approved during former U.S. President Donald Trump's last days in office, of 50 Lockheed Martin F-35 stealth jets to the UAE. The deal is now under review by U.S. President Joe Biden's administration.

Asked about the Israeli government's view of the sale, Gantz said Israel's "qualitative military edge" must be preserved by the United States, adding that the advanced warplane was already in the country's arsenal.

An Israeli statement said the two discussed prospects for developing regional and bilateral projects in a broad range of fields. Israel opened an embassy in Abu Dhabi in January.

Palestinians have been critical of the rapprochement, worried that their own unmet goal of statehood in Israeli-occupied territory might be sidelined.