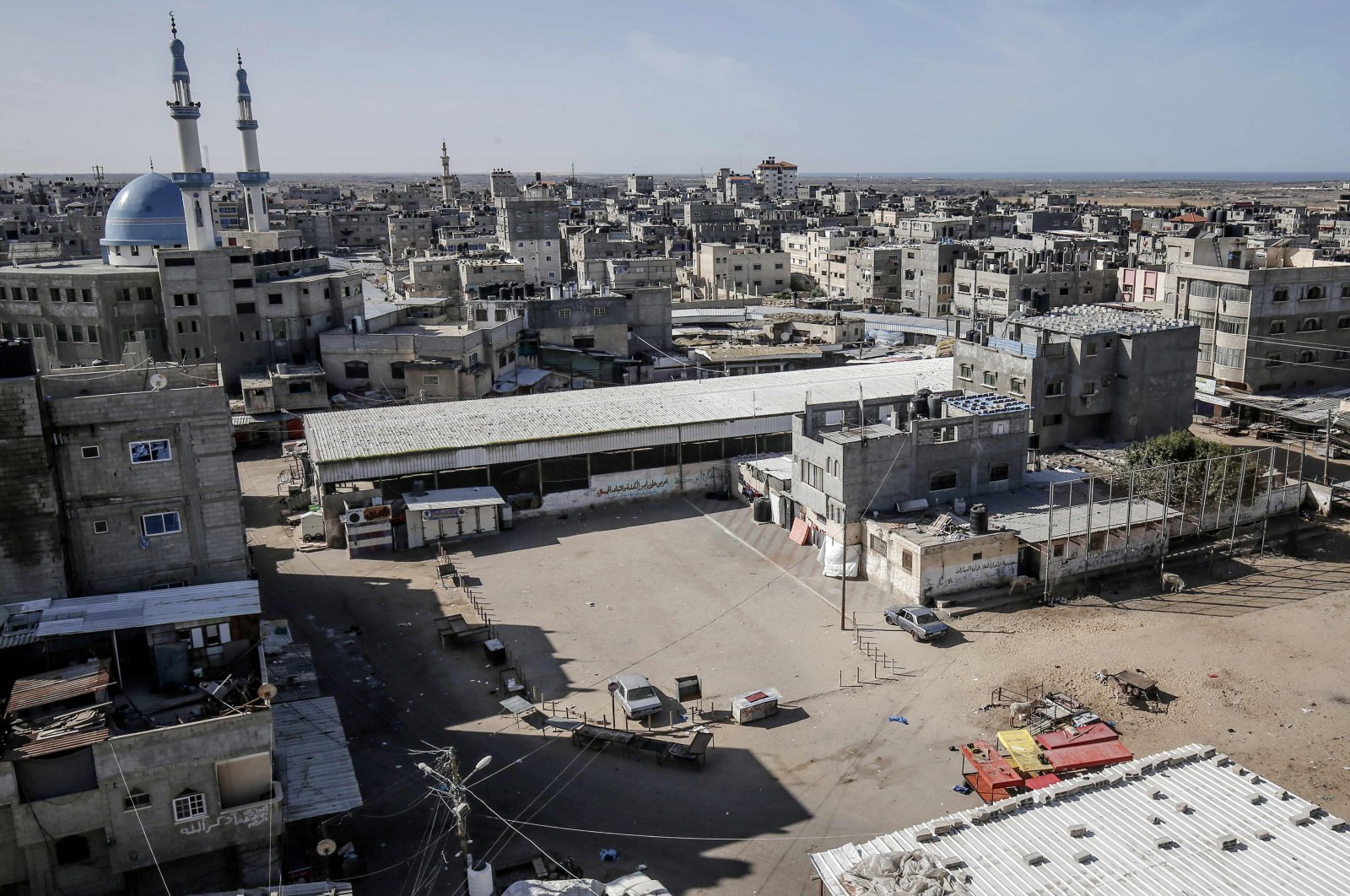 A view of a deserted main square in Rafah following a comprehensive lockdown on weekends in the southern Gaza Strip, as cases of infections with the coronavirus surged in the Palestinian coastal enclave, Dec. 11, 2020. (AFP Photo)
by Agencies Dec 11, 2020 3:53 pm
RECOMMENDED

A two-day lockdown came into effect in the Gaza Strip on Friday to curb the spread of the coronavirus, according to the Interior Ministry in the Palestinian territory.

Until Sunday at 7 a.m. (5 a.m. GMT), all shops except pharmacies are to be closed and people will be barred from leaving their homes except for health reasons.

Police and security forces were deployed in the streets on Friday in the Hamas-run strip to implement the curfew in all districts, which were separated from each other and divided into blocks to facilitate control, as reported by Deutsche Presse-Agentur (dpa).

The ministry said the measures aim to reduce contact and overcrowding in light of the recent high rate of coronavirus cases in the enclave. Gen. Ali Al-Nadi, director of police operations and communications, said that violations of the measures would not be tolerated. In case of an emergency, citizens could call toll-free numbers at the police or the ministry.

The number of infections has recently spiked in Gaza, where 2 million people live in cramped conditions with poor infrastructure. The Ministry of Health reported 617 new cases in the last 24 hours in Gaza, for a total of nearly 25,600 cases. There have been some 175 fatalities related to the virus.

The United Nations Relief and Works Agency for Palestine (UNRWA) has warned that the strip's health system could collapse if the number of cases continues to rise.

The Gaza Strip under Israeli blockade struggles to obtain test kits, aggravating its already fragile health system. The Palestinian enclave had received nearly 20,000 COVID-19 test kits from the World Health Organization (WHO) after declaring it could no longer perform tests in the Gaza Strip due to the shortage. Gaza's Hamas-run health ministry initially said Monday that the only laboratory in the territory able to analyze COVID-19 test samples had ceased its work "due to a lack of equipment" and called for urgent action, as reported by Agence France-Presse (AFP). In a later statement, the ministry asserted it had received 19,500 kits from the WHO, allowing testing to restart. But the newly arrived batch "is only enough for eight days," it added.

Israel's long-standing blockade has created serious obstacles for Gazans to have access to a variety of medical supplies. Gaza's health system of 13 public hospitals and 14 clinics, run by nongovernmental organizations (NGOs), has buckled under persistent blockade-linked shortages of medicine and surgical supplies.

Since 2007, the besieged enclave has been under a crippling Israeli and Egyptian blockade that has gutted its economy and deprived its inhabitants of many vital commodities, including food, fuel and medicine. The humanitarian situation has grown worse by the day in the enclave. The United Nations Relief and Works Agency (UNRWA) stated last year that there are now some 620,000 Gazans who live in abject poverty, meaning they cannot cover their basic food needs and must survive on about $1.60 per day. It also reported nearly 390,000 living in absolute poverty.