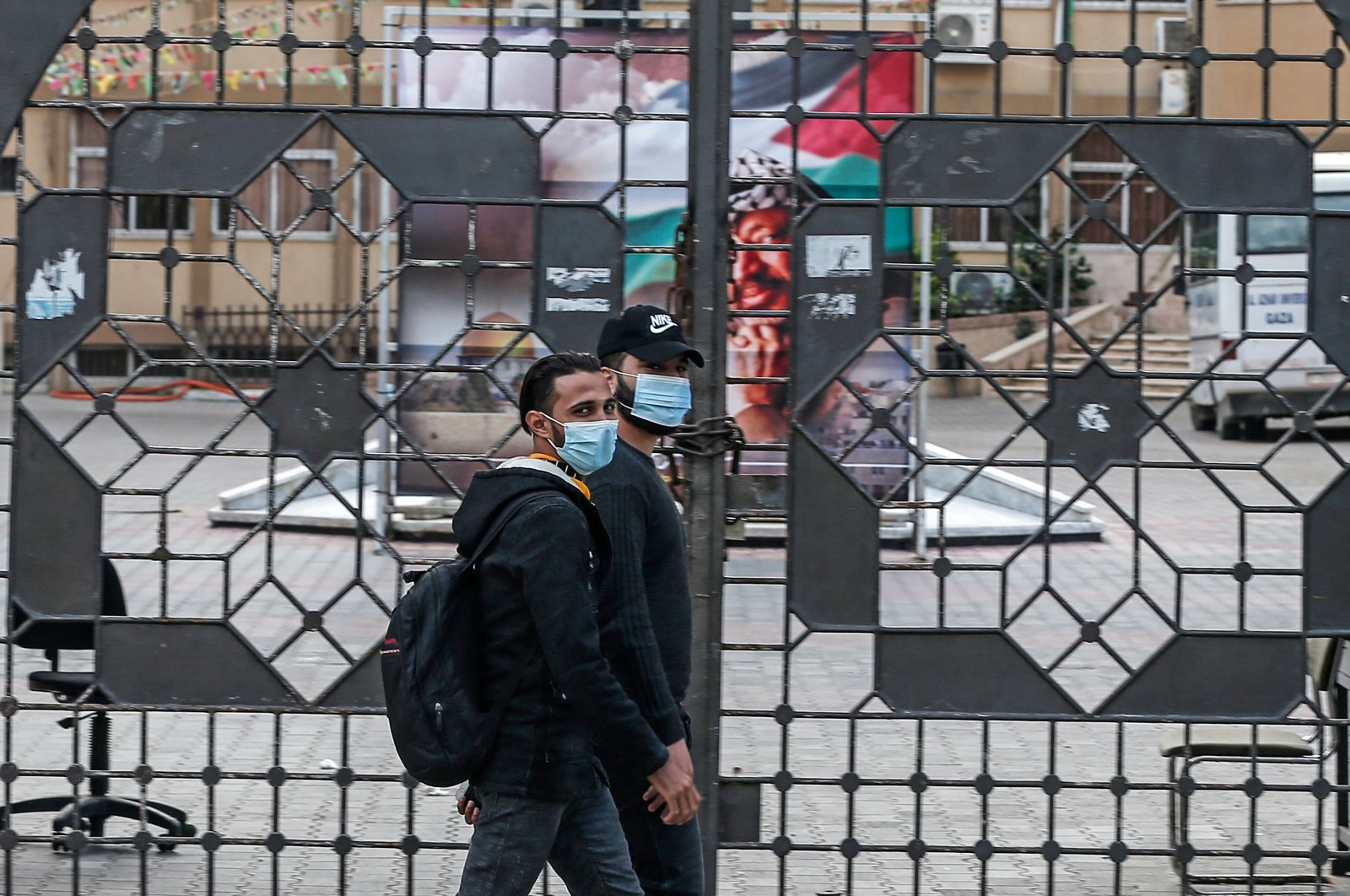 Palestinian men, wearing protective masks, walk past the closed gate of al-Azhar University in Gaza City amid new measures to counter the spread of the COVID-19 pandemic, Nov. 5, 2020. (AFP Photo)
by DAILY SABAH WITH AGENCIES Dec 08, 2020 10:54 am
RECOMMENDED

As numerous countries around the world are starting their COVID-19 vaccination programs, the Gaza Strip under Israeli blockade struggles to obtain test kits, aggravating its already fragile health system. The country is paralyzed due to the Israeli siege and overwhelmed by the rising number of COVID-19 patients.

The Palestinian enclave had received nearly 20,000 COVID-19 test kits from the World Health Organization (WHO) after declaring it could no longer perform tests in the Gaza Strip due to the shortage. Gaza's Hamas-run health ministry initially said Monday that the only laboratory in the territory able to analyze COVID-19 test samples had ceased its work "due to a lack of equipment" and called for urgent action, as reported by Agence France-Presse (AFP). In a later statement, the ministry asserted it had received 19,500 kits from the WHO, allowing testing to restart. But the newly arrived batch "is only enough for eight days," it added.

"There is an urgent need to take measures to save the lives of Gaza's citizens and contain the crisis," he told AFP.

Israel's long-standing blockade has created serious obstacles for Gazans to have access to a variety of medical supplies. Gaza's health system of 13 public hospitals and 14 clinics, run by nongovernmental organizations (NGOs), has buckled under persistent blockade-linked shortages of medicine and surgical supplies.

Gaza, measuring 375 square kilometers (145 square miles), is home to around 2 million Palestinians, more than half of them refugees. Some 90% of its land and sea boundaries and its access to the outside world are controlled by Israel, while Egypt controls its narrow southern border. Since 2007, the besieged enclave has been under a crippling Israeli and Egyptian blockade that has gutted its economy and deprived its inhabitants of many vital commodities, including food, fuel and medicine. In the long-embargoed enclave, the humanitarian situation has grown worse by the day. The U.N. Relief and Works Agency (UNRWA) stated last year that there are now some 620,000 Gazans who live in abject poverty, meaning they cannot cover their basic food needs and survive on $1.60 per day. It also reported nearly 390,000 living in absolute poverty.

The blockaded Gaza Strip has logged nearly 25,600 COVID-19 cases and around 150 deaths, mostly since August. Authorities closed Gaza's borders early in the pandemic, only allowing entry to a limited number of people, who were then required to isolate for three weeks in quarantine centers. A new lockdown was announced from Dec. 11 to the end of the month, with schools, universities, kindergartens and mosques closed.

Globally, the virus has killed more than 1.5 million people and infected over 65 million since it emerged in China in December of last year.

While countries prepare to launch mass inoculations to get the pandemic under control, the U.K. became the first nation to start its COVID-19 vaccination program. British health authorities rolled out the first doses of a widely tested and independently reviewed COVID-19 vaccine Tuesday, starting a global immunization program that is expected to gain momentum as more serums win approval. According to The Associated Press (AP), the first 800,000 doses are going to people over 80 who are either hospitalized or already have outpatient appointments scheduled, along with nursing home workers. Others will have to wait their turn. Public health officials have asked the public to be patient because only those who are most at risk will be vaccinated in the early stages. Medical staff will contact people to arrange appointments, and most will have to wait until next year before the country has acquired enough vaccines to expand the program.