Hamas, Fatah unite after ‘stab in the back’ by Arab states over deals with Israel 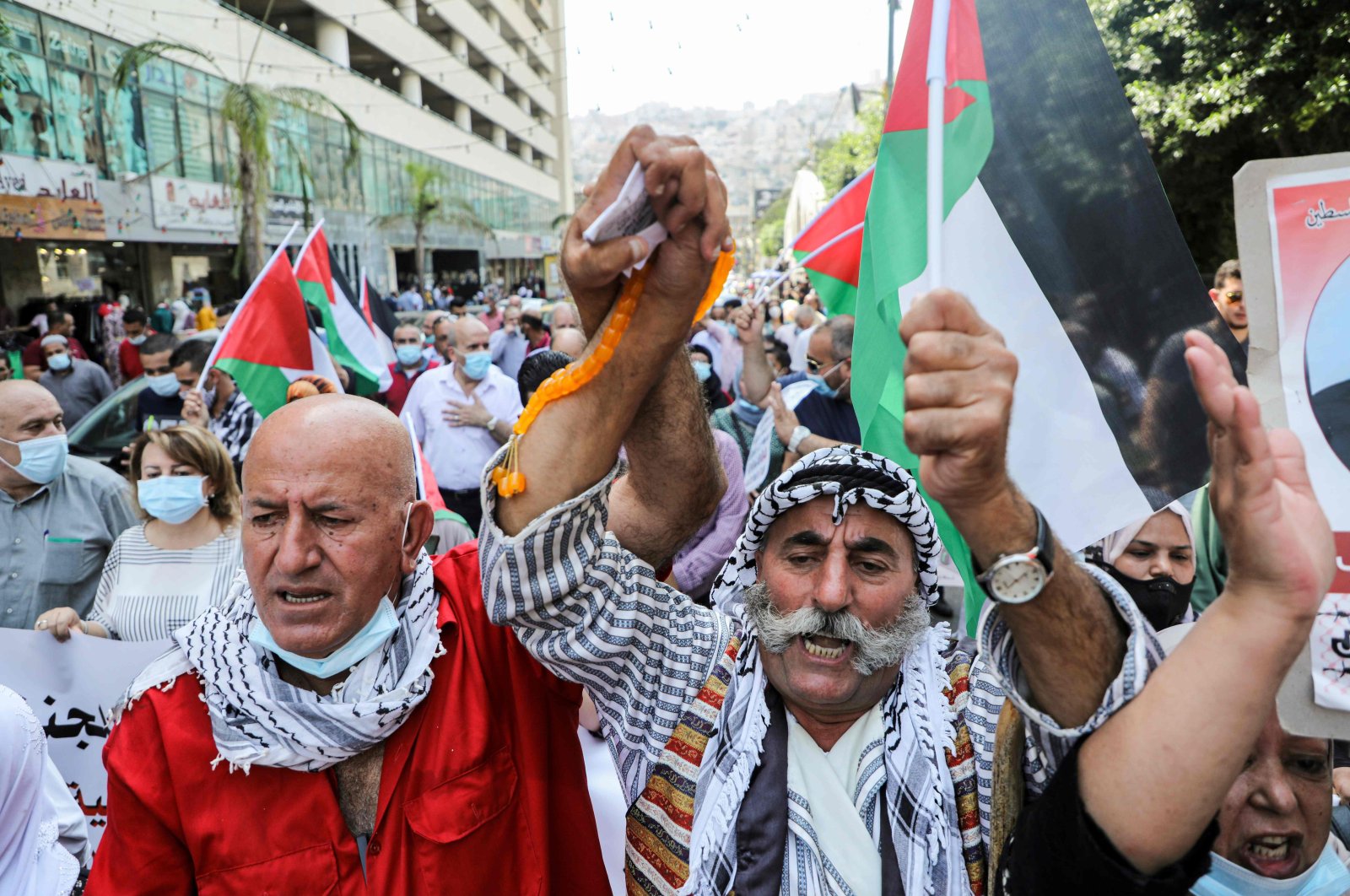 Demonstrators take to the streets with Palestinian flags during a protest in the city of Nablus, the occupied West Bank, Sept. 15, 2020. (AFP Photo)
by Daily Sabah with AFP Sep 15, 2020 1:49 pm
RECOMMENDED

Palestinian factions seek to restore unity against Israel and mend political division after condemning the U.S.-brokered normalization deal with the two Gulf Arab states as a "stab in the back."

Both the mainstream Palestinian Authority (PA) based in the occupied West Bank and Hamas, which rules Gaza, agreed to form a joint leadership group called the "Unified National Leadership for Popular Resistance," comprising all factions that will lead "comprehensive popular resistance" against the Israeli occupation. The intra-Palestinian unity talks came after a long-awaited Sept. 3 meeting between PA President Mahmoud Abbas, Hamas's Ismail Haniyeh, Islamic Jihad's chief Ziyad al-Nakhala and the leaders of various Palestinian factions, defying the ongoing political divisions.

At a summit of the 22-member Arab League last week, foreign ministers failed to back a Palestinian push to condemn the normalization deals between Israel, the United Arab Emirates (UAE) and Bahrain.

Tuesday's ceremony, hosted by U.S. President Donald Trump, is "a black day in the history of Arab nations," Palestinian Prime Minister Mohammad Shtayyeh said on Monday. Shtayyeh said the Palestinians are now discussing whether to "adjust Palestine's relationship with the Arab League." But critics say the proposed move is too little too late, with Abbas facing mounting criticism for Palestinians' increasingly isolated position.

The PA maintains the validity of the so-called "Arab consensus" and rejects the notion that it is isolated. That consensus has long held that Arab states will only normalize ties if Israel meets a number of conditions. One demand is for Israel to withdraw from the territories it occupied in the Six-Day War of 1967. Another is to agree to a Palestinian state with east Jerusalem as its capital, and the third is to find a just solution for the millions of Palestinian refugees and their descendants.

"We hope that the Arab countries will remain committed to this consensus," said Jibril Rajoub, a senior Palestinian official, adding that straying from it "will lead to nothing." "Those who are violating the Arab consensus ... will be isolated" in the long term, he warned.

Hamas and the PA have been carrying out a reconciliation process for four years. According to the unification deal, Hamas was going to hand over Gaza's control, accepting the establishment of a unified government under the leadership of the PA's party, Al-Fatah. In return, the PA was going to lift the sanctions and, by doing so, ease the living conditions in the densely populated city.

In 2018, Hamas accepted the formation of a national unity government under the supervision of Egypt. According to the deal, the state officials in Gaza will be paid by the PA. It was known that Hamas had failed to make the payments due to the lack of financial resources.

In the last days of 2016, the two parties held meetings in Moscow but at the beginning, failed to reach a consensus. Increasing international and internal pressure on Hamas forced it to take initiative, resulting in the change of the party manifest and the main cadre. Hamas declared its new program in May of 2017 in the Qatari capital of Doha, disavowing itself from the Muslim Brotherhood, distancing itself from aims to destroy Israel and accepting the 1967 borders of the Palestinian state without referring to Israel's legitimate statehood.