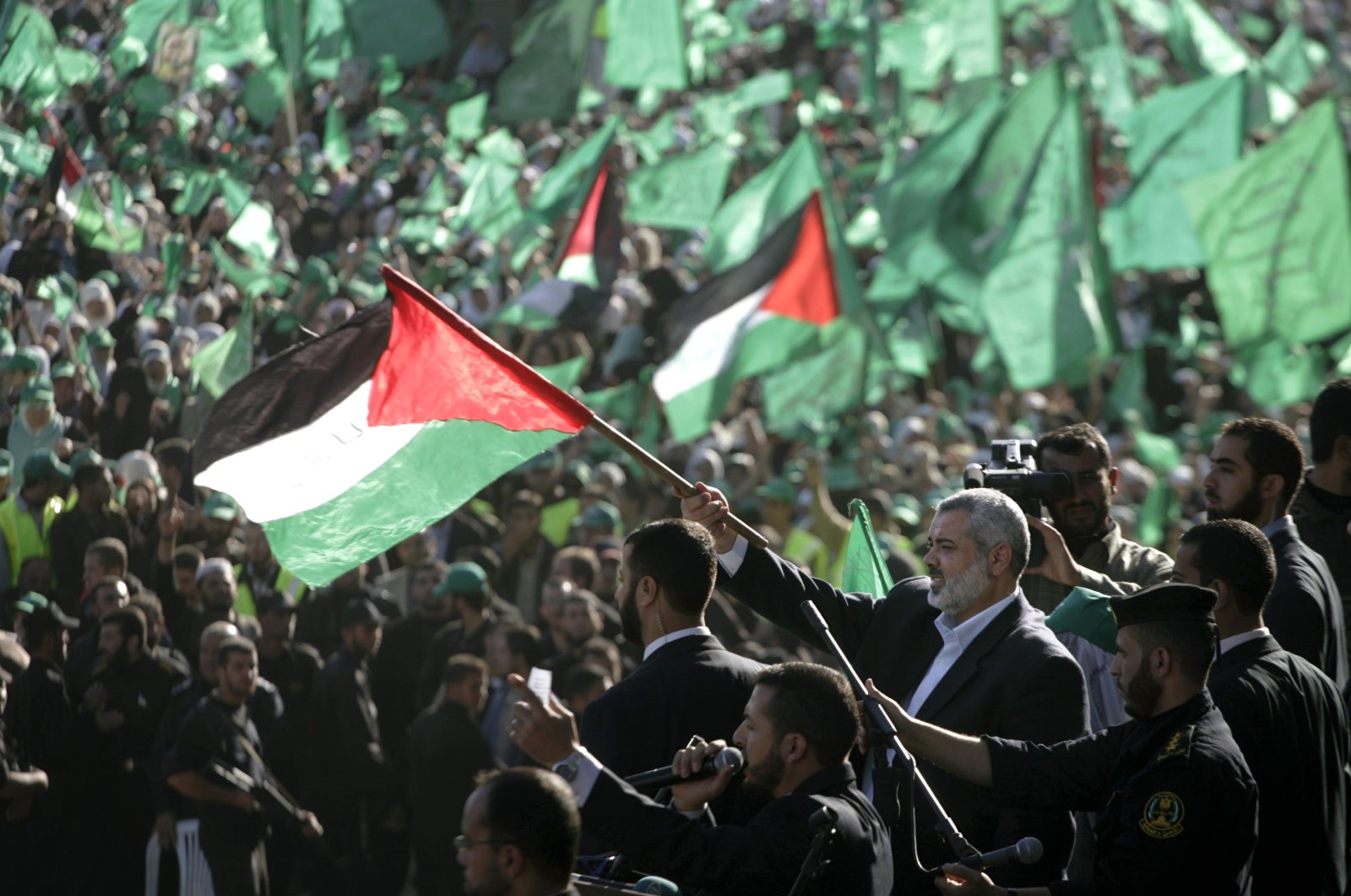 Chief of Hamas political bureau Ismail Haniyeh waves a Palestinian flag during a celebration of the 20th anniversary of the foundation of Hamas in this undated photo. (AP Photo)
by Daily Sabah with Wires Aug 23, 2020 6:44 pm
RECOMMENDED

The chief of Hamas' political bureau, Ismail Haniyeh, on Friday criticized Egyptian support for the normalization deal between the United Arab Emirates (UAE) and Israel, and accused Arab leaders of seeking support from foreign powers to stay on top of their regimes.

Speaking to Turkey’s English-language channel TRT World, Haniyeh described the agreement as “overriding the track of history and a violation of Arab and Islamic consensus."

“We do not support any deal between Egypt and Israel, and we do not agree that there is any support for the normalization deal with Israel,” Haniyeh said. “We oppose (Egypt’s) political support for the deal.”

According to Haniyeh, the deal is an “overriding the track of history and a violation of Arab and Islamic consensus as well as a stab in the backs of the Palestinian people.”

Haniyeh also urged the UAE to abandon the deal and return to its commitment to Palestinian rights.

More than one week ago, U.S. President Trump announced a deal between Israel and the UAE to normalize their relations. Following the deal Egyptian President Abdel-Fattah el-Sissi welcomed the agreement between the UAE and Israel, saying he "value the efforts of those in charge of the deal to achieve prosperity and stability for our region.”

“I followed with interest and appreciation the joint statement between the United States, United Arab Emirates and Israel to halt the Israeli annexation of Palestinian lands and taking steps to bring peace in the Middle East,” el-Sissi said on Twitter.

The UAE is only the third Arab state in more than 70 years to forge full relations with Israel after Egypt and Jordan. Under the U.S.-brokered deal, Israel shelved plans to annex settlements in the occupied West Bank, which Palestinians seek as part of a future state.

Israel hitherto had no formal ties with Gulf Arab states, but shared concerns with the UAE about Iran's regional influence and actions, along with the UAE's role as a regional business hub, led to a limited thaw and discreet contact in recent years.

For the UAE, however, the calculus to build relations with Israel carries a number of strategic advantages beyond countering Iran and suspending West Bank annexation. Through Israel, the UAE can build stronger ties with both Republicans and Democrats – a crucial hedge considering the uncertainty of Trump’s reelection chances against former Vice President Joe Biden in November’s U.S. presidential elections.