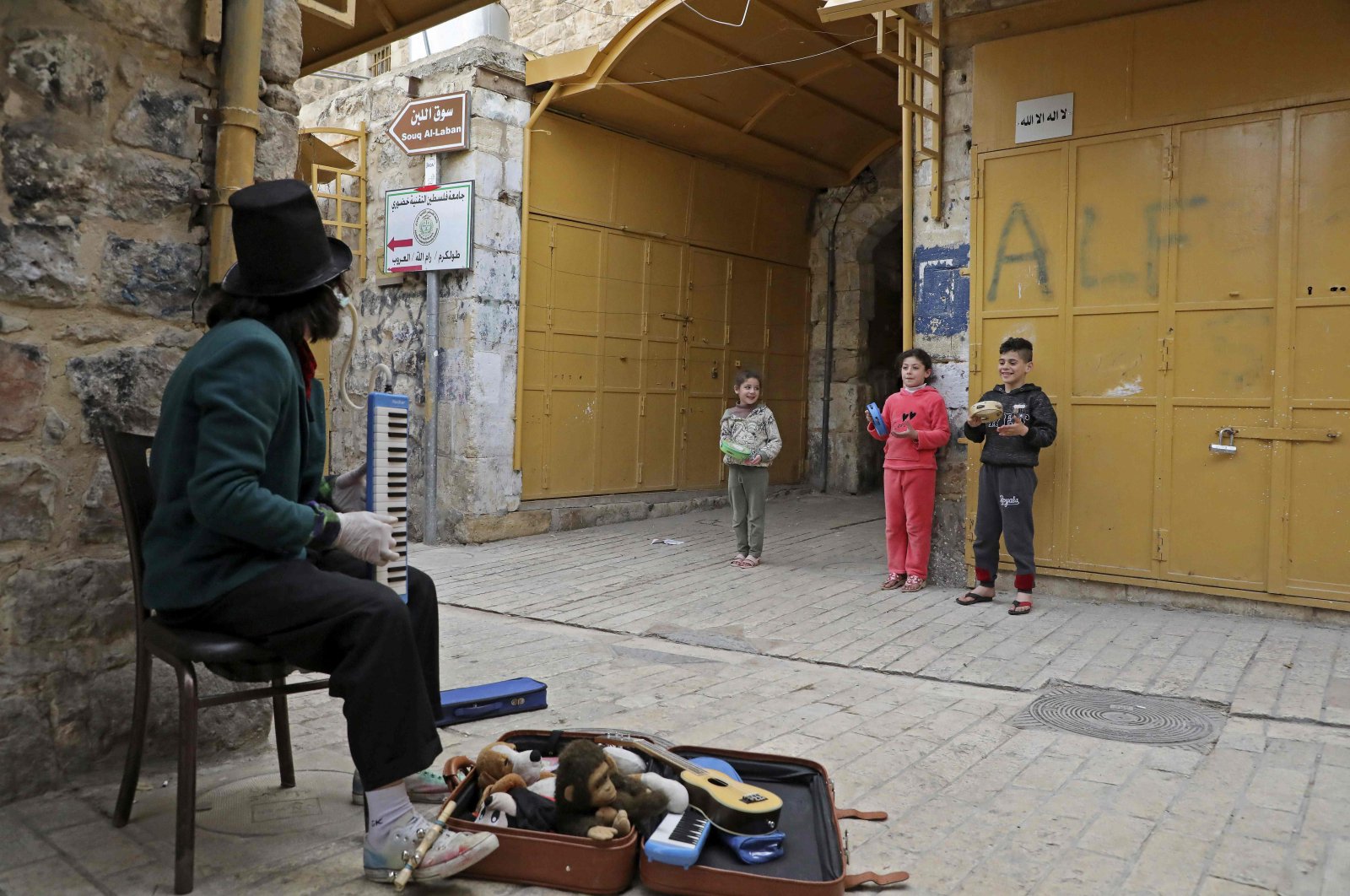 A Palestinian artist, dressed as a clown, plays music near Palestinian children in the divided West Bank town of Hebron, Tuesday, March 31, 2020. (AFP Photo)
by DAILY SABAH Apr 06, 2020 11:53 am
RECOMMENDED

Concerns have been raised over the conditions of hundreds of Palestinian children held in Israeli prisons, where they are subjected to torture and a lack of medical care amid coronavirus outbreak, the Ministry of Prisoners’ Affairs and Ex-Prisoners in Gaza reported Sunday.

The ministry urged the rights organizations to protect Palestinian children held by Israel. At least two children were put under quarantine by the Israelis because they have been in contact with investigating officers and other prisoners who have the virus, as reported by the Middle East Monitor.

Israeli treatment of Palestinian children in military detention has become a major area of concern for the international community. Israel arrested 789 boys and girls aged 12 to 18 from January 2019 to March 2020.

Israel's perpetual violations of Palestinians' basic rights in its prisons, including torture, repression and assaults have long been under the spotlight. Last month, Israel's detention authority decided to reduce rations of bread, water and meat for Palestinian prisoners, exposing once again the ongoing systematic violations of human rights in Israeli jails.

Israel has been criticized by a U.N. human rights body for its killings of protesters in Gaza and the treatment of the Palestinians, declaring it a "war crime" under the Statute of Rome. The high casualty toll triggered a diplomatic backlash against Israel and new charges of excessive use of force against unarmed protesters. The Israeli army has killed 25 Palestinian children in the occupied West Bank and the blockaded Gaza Strip in 2018.

Defense for Children International-Palestine, which advocates for the rights of Palestinian children in the Israeli-occupied Palestinian territories, asserted that Israeli forces had deliberately killed minors with live ammunition during border protests. According to the nongovernmental organization, this death toll includes 21 children targeted directly, 11 of whom were shot in the head or neck. According to the U.N., during the border protests, over 1,000 children have been injured by Israeli forces in the besieged Gaza Strip during demonstrations, according to the U.N. Children's Fund (UNICEF).