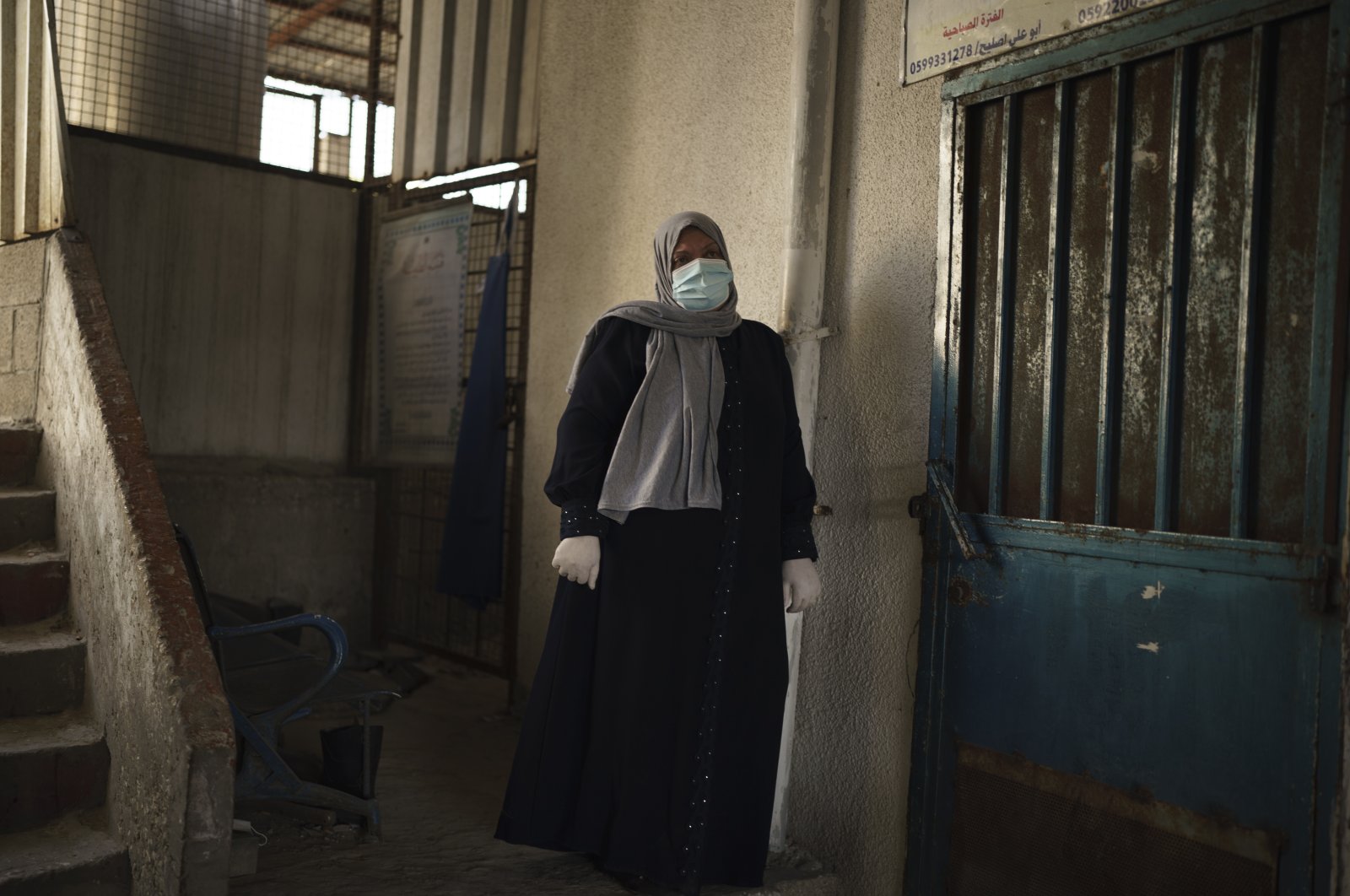 A Palestinian mourner waits outside a morgue for the release of the body of Diana Abu Al-Ouf, 46, who died today in a hospital in Israel where she was receiving treatment after being severely wounded in an airstrike over two weeks ago in Gaza City, Thursday, June 3, 2021. (AP Photo)
by Anadolu Agency Jun 03, 2021 11:31 pm
RECOMMENDED

39 Palestinian women lost their lives in the attacks carried out by Israel on Gaza. Many of them were mothers, who are no longer alive to give a hug to their children before going to bed or to assist their daughters and sons with experimental food recipes in the kitchen.

39 women closed their eyes to all beauties of life, without even saying goodbye to their loved ones.

254 Palestinians, including 39 women, 66 children, were killed in the Israeli attacks on Gaza, while also leaving 1,948 people injured.

Here are the women who were killed during the latest attacks by Israel between May 11-20, 2021.

Layali Abu al-Khair, 40, a biology graduate, was the mother of seven children. She lost her life with her husband and three children in the Israeli attacks.

Manar Baraka, 18, was also the target of Israeli attacks in Deir el-Balah, Gaza. She was killed in the field where her family's chicken farm is located.

7-month-pregnant Reem Saad et-Telbani, 31, with a degree in information technology, died during the attacks with her two children and her unborn baby.

Miami Arafa, 48, mother of four children, also died in the Israeli attacks. She was dreaming about attending her daughter's wedding ceremony.

Arafa, 28, was getting ready for her wedding, which was going to be held two weeks after Eid al-Fitr (Ramadan feast).

Al-Hato, 55, lost her life with her husband as the car they were traveling in was hit by an Israeli strike.

Tanani, 35, who was pregnant, died with her husband and four children. The family's dream was to buy a house.

Walaa, 25, was pregnant with her first baby, whom she would name Meryem. She and her unborn daughter lost their lives in the Israeli attacks.

Warda, 24, the sister of Walaa, was known as a successful student. She studied Business in English at the university and was planning to start working to support her family.

Hadeel, 21, the sister of Walaa, was studying to be a nurse. Two weeks before she died in the attacks, she had sold her gold earrings to buy school equipment, such as a white coat, blood pressure monitor and stethoscope.

Mother of two children, Zamili was seven months pregnant. She and her daughter and her unborn baby died in the attacks by Israel.

Halima Al-Madhoun, 66, also died in the Israeli attacks with her husband Abdurrahman.

Siham Rantisi, 66, was among the civilians targeted in the Israeli attacks with her son, daughter-in-law and 2-year-old grandson.

Shaima, the daughter-in-law of Siham Rantisi, died in the attacks along with her 2-year-old son and husband.

Manar, 39, and her daughter Lina were among those killed in the attacks.

Nima Saleh, 47, who was taking care of his disabled mother in the village of Ummu Nasr in the north of Gaza, was killed in the Israeli bombardment.

Sabreen, 28, mother of five, was killed by Israel with her 10-month-old son and two sisters.

The mother of three children, Nisreen, 26, lived under difficult economic and social conditions. She was looking forward to reuniting with her husband as he had gone to Europe to work three years ago.

Lamia, 27, the mother of three children, was killed by Israel's attacks along with her two sons.

Fayza, 43, mother of three and grandmother of six, was expecting her seventh grandchild.

An Israeli bombardment took the life of Yasmin, 30, and her four children. She was educated as a primary school teacher but she devoted her life to raising her children.

The Israeli army killed Maha, 35, with her four children.

Abeer, 29, was a mother of five. She died with four of her children in the Israeli attacks.

7 women from the "Abu Al-Owf" family:

Majeda Abu al-Avf, 78, was a grandmother of 13 grandchildren.

Sobhia, 72, lost her eyesight 11 years ago due to health problems.

Raja, 41, was one of the volunteers working for psychological support in Gaza. She was preparing to defend her doctoral thesis in psychology at the Islamic University three months later. She and her four children were killed in the Israeli attacks.

Raja Al-Efrangi, 41, who was killed in the Israeli attacks with her four children, completed her master's degree in sociology three days before her death.

Reem, 40, mother of four children, lost her life with her husband Eymen and three children in the Israeli attacks. Only his son Omar remained from his family.

Shaima, 21, was getting ready for her wedding in June. She was a student at the dentistry faculty and was a successful reciter of the Holy Quran.

5 women from the Kolak family:

The attacks by Israel took the lives of Saadia, 84, and her daughter.

Bahaa, 49, was a single woman who was taking care of her elderly parents. She died with her mother in Gaza's Al-Wehda street.

Reham, 33, was working as an engineer in a Palestine Telecommunications company. She was an ardent follower of the Spanish football league.

Israeli bombs killed 19-year-old Ayat along with her husband and 6-month-old son on Al-Wahde Street.

Amal, 42, died along with her three sons.

Mother of a girl, Amani, 38, was also 8-months-pregnant when she died in the Israeli attacks along with her entire family.

Fida'a, 35, was the mother of two boys and three girls.

Huda, 36, was killed when Israeli bombs hit her home in Khan Yunis. Her husband and children were injured in the same attack.