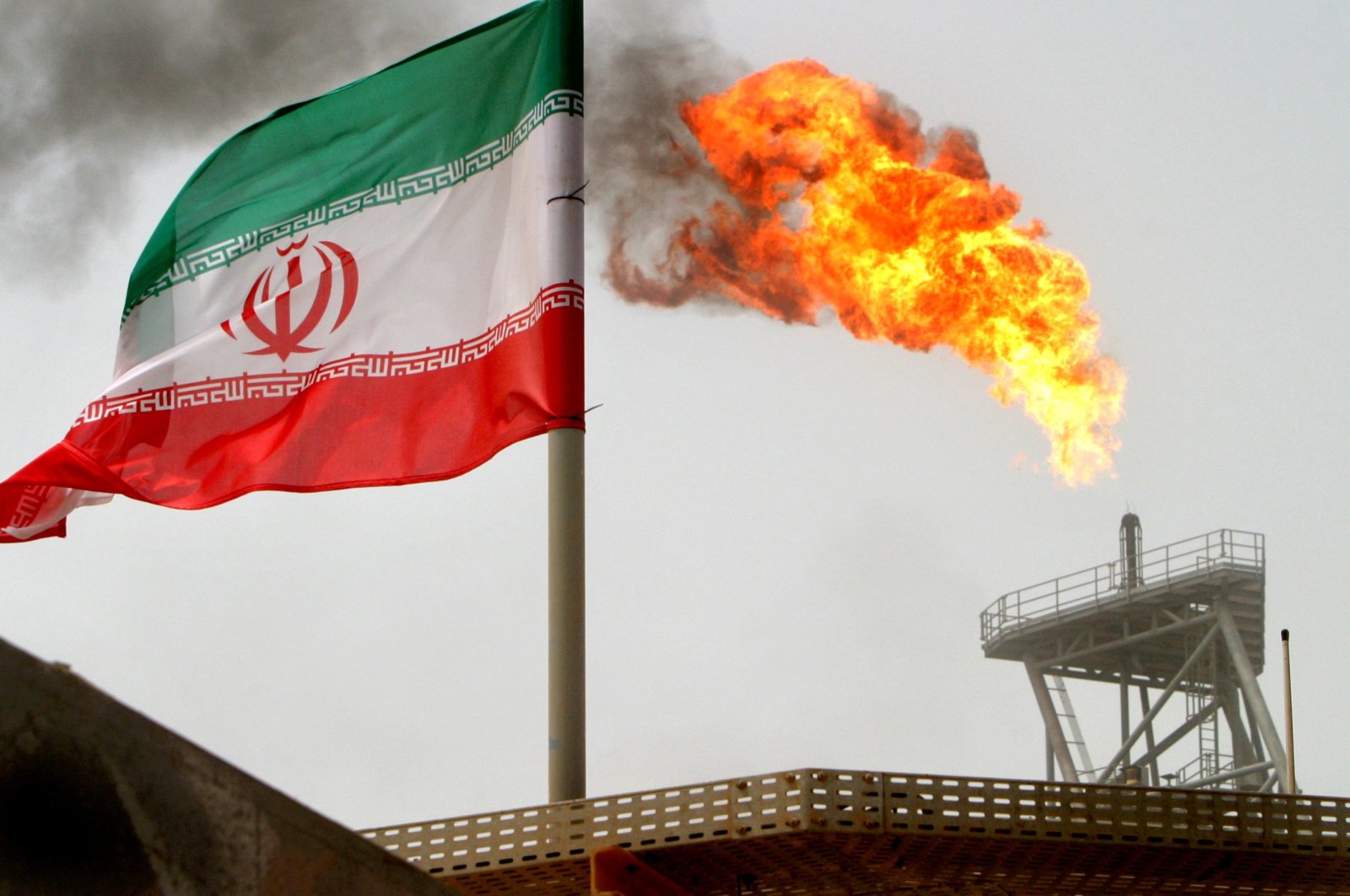 A gas flare at an oil production platform in the Soroush oil fields is seen alongside an Iranian flag in the Persian Gulf, Iran, July 25, 2005. (Reuters Photo)
by ASSOCIATED PRESS
Mar 04, 2021 5:44 pm

Iran has agreed to sit down with international technical experts investigating the discovery of uranium particles at three former undeclared sites in the country, the head of the U.N. atomic watchdog said Thursday, after months of frustration at Tehran's lack of a credible explanation.

The agreement came as three of the remaining signatories to the 2015 nuclear deal with Iran – France, Germany and Britain – backed off the idea of a resolution criticizing Iran for its decision to start limiting access to International Atomic Energy Agency (IAEA) inspectors to current facilities.

IAEA Director General Rafael Grossi told reporters in Vienna it was not up to him to say whether Iran's move to hold talks with his technical experts was linked to the decision of the so-called E3 group, but suggested it was difficult to separate the political side of Iran's nuclear program from the technical side.

"It is obvious for everybody that all these matters need to have some resolution, and when it comes to Iran - and I'm not saying anything that Iran itself hasn't said - everything is interconnected, of course,” he said. "These are different parts of a single whole.”

The E3 had floated the idea of the resolution after Iran began restricting international inspections last week. After a last-minute trip to Tehran by Grossi, however, some access was preserved. Russia and China – the other members of the nuclear deal known as the Joint Comprehensive Plan of Action – were reportedly against the resolution, saying it could antagonize Iran further.

Germany's Foreign Ministry told The Associated Press (AP) it was common to "discuss all possible options for action” ahead of such meetings, and that despite dropping the resolution, the E3 still had concerns about Iran's "serious violations” of the nuclear deal.

"Above all, we would like to support the Director General of the IAEA in his efforts to start talks with Iran regarding the open safeguards issues,” the ministry said. Iran's ambassador to the IAEA, Kazem Gharibabadi, tweeted after the decision that "wisdom prevails” and that the E3 had prevented unnecessary tension. Iran's Foreign Ministry applauded the move.

"Today’s development can maintain the path of diplomacy opened by Iran and the IAEA, and pave the way for full implementation of commitments by all parties to the nuclear deal,” spokesperson Saeed Khatibzadeh said.

The nuclear deal promised Iran economic incentives in return for the curbs on its nuclear program. President Donald Trump pulled the U.S. out of the deal unilaterally in 2018, saying it needed to be renegotiated. Since then, Iran has slowly violated the restrictions to try and pressure the remaining nations to increase the incentives to offset new, economy-crippling U.S. sanctions.

Before the decision to start limiting IAEA access, it had already begun enriching more uranium than allowed and to a greater purity than permitted, among other things. U.S. President Joe Biden has said he is ready to join talks with Iran and world powers to discuss a return to the deal but the violations complicate the matter, and over the weekend Iran turned down a European Union offer to host joint talks.

Outside the JCPOA, Grossi has also been pushing Iran for answers on three sites where inspections had revealed traces of uranium of man-made origin, suggesting they were once connected to Iran's nuclear program.

Grossi said that with Iran agreeing to face-to-face talks about the findings he hoped that "we could try to go beyond the exchange of letters and messages which, to me, seemed a lot like talking past each other on this issue, and really try to tackle them and try to solve them.”

The first meeting is to take place at the beginning of April and Grossi said he hoped to "come to some satisfactory outcome” by the next IAEA board meeting in June. In his address to the board, U.S. representative Louis Bono urged Iran to "cooperate fully with the IAEA without further delay to resolve these issues.”

He also called Iran's recent restrictions on IAEA inspections "counterproductive” and said they should be reversed.

"Robust verification is the core of the global nonproliferation regime and the bedrock on which durable nuclear nonproliferation agreements and arrangements are built,” Bono said."President Biden has made clear: we remain ready to reengage in meaningful diplomacy to achieve a mutual return to compliance with the JCPOA," he added. "And while these safeguards issues are a separate topic, resolving them will also be essential for establishing confidence in Iran’s nuclear-related assurances.”