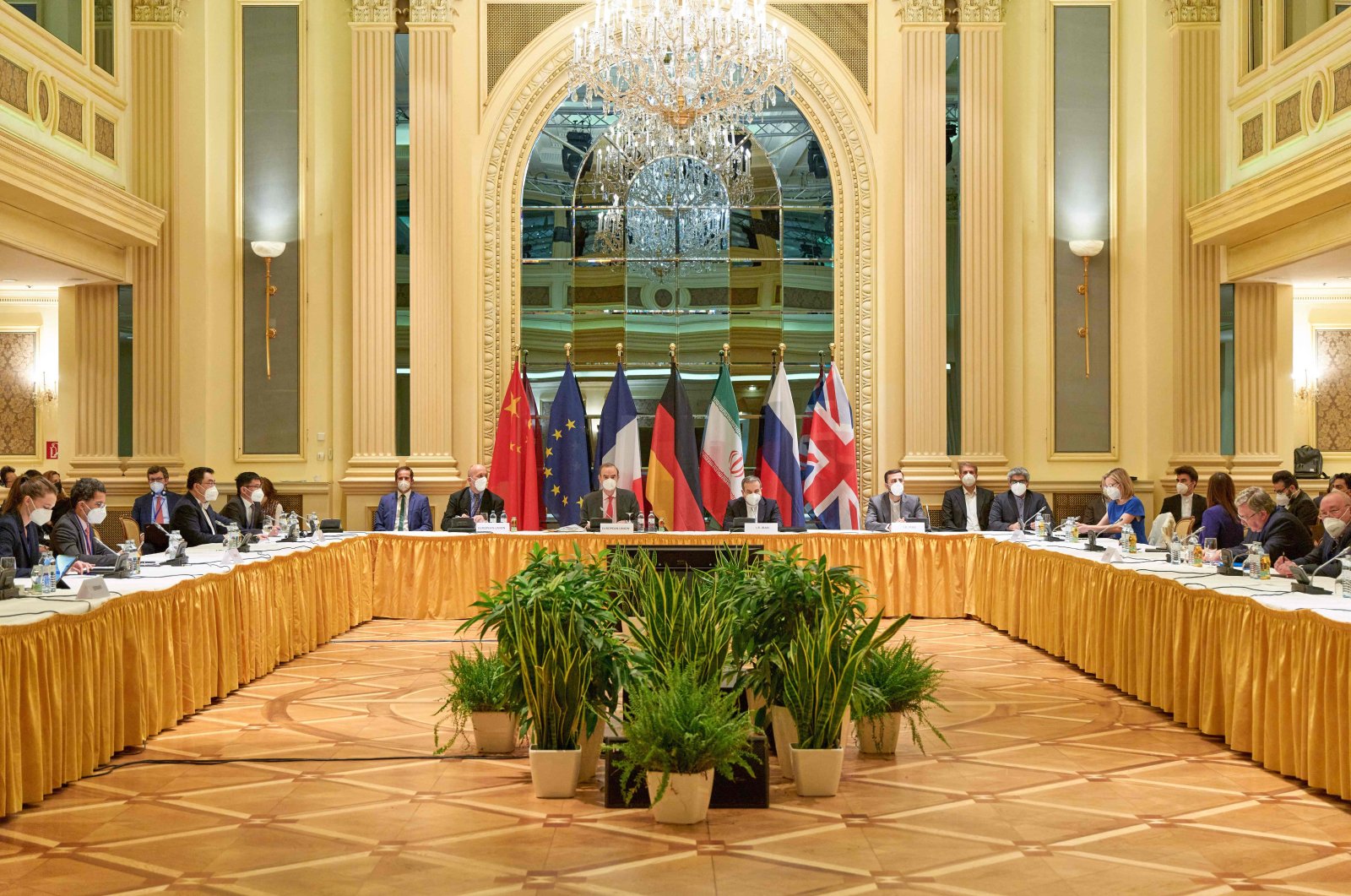 Delegation members from the parties to the Iran nuclear deal – Germany, France, Britain, China, Russia and Iran – attend a meeting at the Grand Hotel of Vienna as they try to restore the deal taken and released by the EU Delegation, Vienna, Austria, April 20, 2021. (Various sources - handout via AFP)
by Daily Sabah with Agencies May 06, 2021 7:41 pm
RECOMMENDED

A senior State Department official said Thursday it is "possible" that Iran and the U.S. return to mutual compliance under the 2015 Joint Comprehensive Plan of Action (JCPOA).

The official, who briefed reporters on condition of anonymity ahead of talks in Vienna that are expected to resume Friday, cautioned, however, that "only time will tell" if it is likely to happen.

"This is ultimately a matter of a political decision that needs to be made in Iran," said the official.

U.S. Secretary of State Anthony Blinken previously said that the U.S. will return to the nuclear accord after Iran complies.

The Iran nuclear deal was negotiated in 2015 to prevent the country from developing nuclear weapons in exchange for the lifting of crippling economic sanctions. Former President Donald Trump pulled out in May 2018 and reimposed heavy sanctions, plunging oil-rich Iran into an acute economic crisis, more recently exacerbated by the coronavirus pandemic. In response, Iran has been incrementally violating the terms of the agreement since 2019, including higher uranium enrichment and uranium metal production.

President Joe Biden has indicated that the U.S. would be willing to rejoin but there are complications. Iran has been steadily violating the restrictions of the deal, like the amount of enriched uranium it can stockpile and the purity to which it can enrich it.

Tehran’s moves have been calculated to put pressure on the other nations in the deal – Russia, China, France, Germany and Britain – to do more to offset crippling sanctions reimposed under Trump.

Iran has said that before it resumes compliance with the deal, the U.S. needs to return to its own obligations under the deal by dropping the sanctions. The International Atomic Energy Agency (IAEA) has said that over the past two years, Iran has accumulated a lot of nuclear material and new capacities, and used the time for "honing their skills in these areas.”

The ultimate goal of the deal is to prevent Iran from developing a nuclear bomb, something it insists it doesn’t want to do. Iran now has enough enriched uranium to make a bomb, but nowhere near the amount it had before the nuclear deal was signed. As part of its ongoing violations of the JCPOA, Iran last month began restricting IAEA inspections of its nuclear facilities.