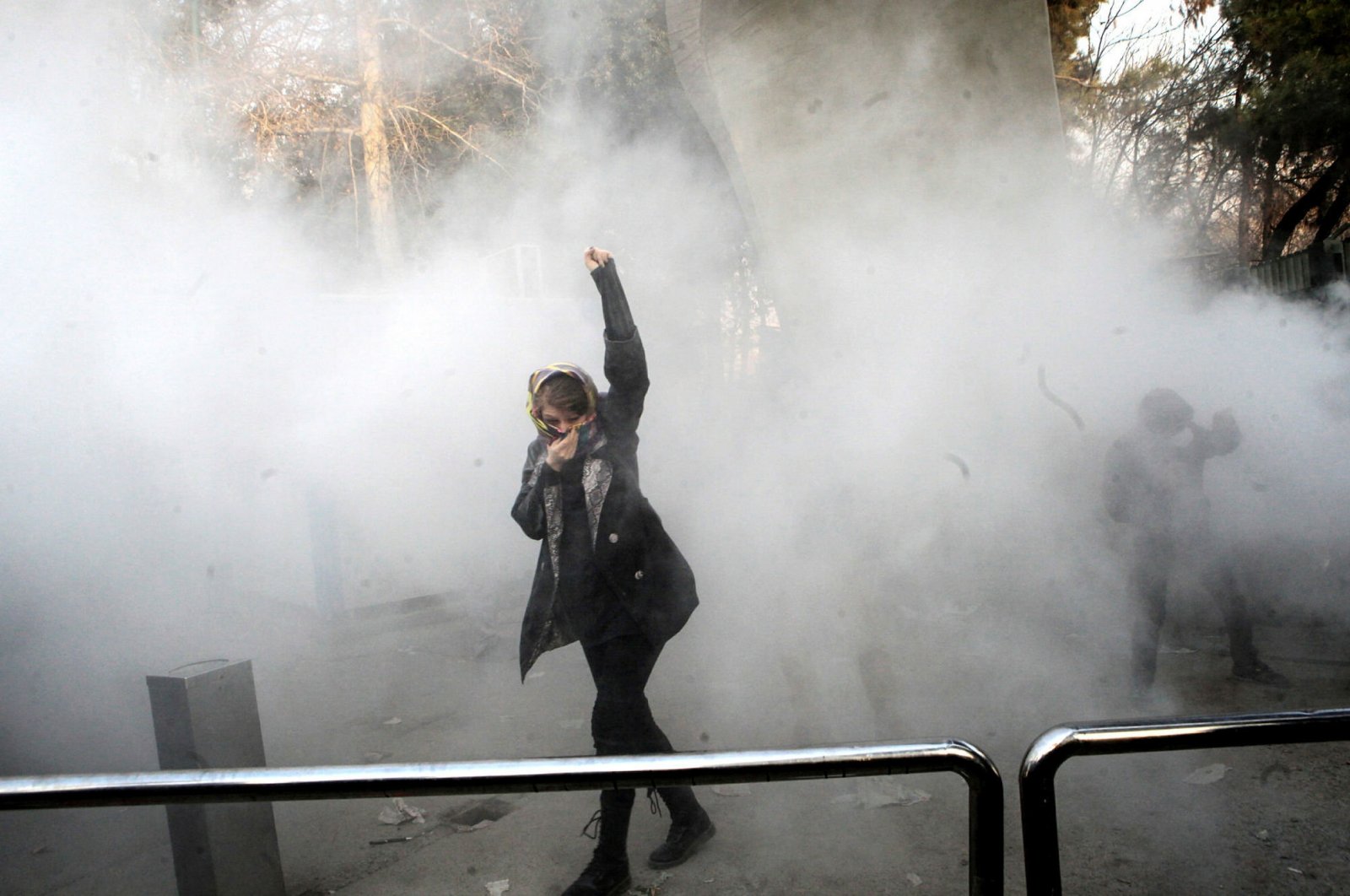 A woman raises his fist amid smoke during an anti-government protest in Iran. (Archive Photo)
by French Press Agency - AFP Mar 09, 2021 1:46 pm
RECOMMENDED

After Iran imposed an internet shutdown lasting several days in a southeastern region during a rare upsurge of unrest last month, activists say the government is employing the tactic repeatedly in wake of any protests across the country in an effort to control the flow of information.

Rights groups say at least 10 people were killed when security forces opened fire on fuel porters around Saravan in the province of Sistan-Baluchistan on Feb. 22, prompting protests where live ammunition was used on unarmed demonstrators.

However, little information was filtered out due to a near-total shutdown of the internet in the impoverished region bordering Pakistan, which has a large ethnic Baluch population and has been a flashpoint for cross-border attacks by separatists and extremists.

The internet shutdown was a "measure authorities appear to be using as a tool to conceal gross human rights violations and possible international crimes such as extrajudicial killings," freedom of expression groups Access Now, Article 19 and Miaan Group said in a joint statement with Amnesty International.

Campaigners say such shutdowns, which recall those seen in recent months during street protests in Belarus and Myanmar, have a dual purpose.

They seek to prevent people from using social media messaging services to mobilize protests but also hinder the documentation of rights violations that could be used to rally support at home and abroad.

Iran in November 2019 imposed nationwide internet limits during rare protests against fuel hikes that the authorities suppressed in a deadly crackdown.

The Sistan-Baluchistan shutdown saw mobile internet services halted, effectively shutting down the net in an area where phones account for over 95% of internet use.

"It is aimed at harming documentation and the ability of people to mobilize and coordinate," Mahsa Alimardani, Iran researcher with the Article 19 freedom of expression group, told Agence France-Presse (AFP). "It helps the authorities to be able to control the narrative."

State media said there were attacks on government buildings in Saravan and that a policeman was killed when unrest spread to the provincial capital Zahedan.

The governor of the city's region, Abouzarmahdi Nakahei, denounced "fake" reports of deaths in the protests, blaming "foreign media."

Alimardani noted that targeting mobile internet connections made the shutdown different from the one seen in November 2019.

Then, Iranians were cut off from international internet traffic but were able to continue highly-filtered activities on Iran's homegrown internet platform the National Information Network (NIN).

She said the documentation of atrocities was the authorities' biggest fear. "It is a big rallying call when these videos go viral," she said.

Unlike some other minority groups in Iran like Arabs and Kurds, the Baluch do not have major representation in the West to promote their cause and draw attention to alleged violations on social media.

Most Baluch adhere to the Sunni branch of Islam rather than Shiism, which is dominant in Iran, and rights groups also say Baluch convicts have been disproportionately targeted by executions.

According to information received by Amnesty from Baluchi activists, at least 10 people were killed on Feb. 22 when Revolutionary Guards "unlawfully and deliberately used lethal force" against unarmed Baluchi fuel porters near Saravan.

The crackdown came after the security forces blocked a road to impede the work of the porters, who cross between Iran and Pakistan to sell fuel.

Amnesty added that security forces also used unlawful and excessive force against people who protested in response to the killings, as well as bystanders, leaving another two dead.

Amnesty's Iran researcher Raha Bahreini told AFP that the toll was a "minimum figure" that Baluchi activists verified after confirming the victims' names.

The New York-based Centre for Human Rights in Iran has an even higher toll of 23 dead, citing local sources.

The internet shutdown "severely restricted the flow of information to rights defenders from contacts and eyewitnesses," Bahreini told AFP.

"The authorities are fully aware they are preventing the outside world from learning about the extent and gravity of violations on the ground," she added.

She said such unlawful shutdowns had turned into a "pattern" in Iran.

U.N. High Commissioner for Human Rights spokesperson Rupert Colville said that the shutdown has impeded precise verification of the death toll and had "the apparent purpose of preventing access to information about what is happening there."

The CHRI said Iran blocked internet access "to kill protesters indiscriminately and out of the public eye and prevent protesters from communicating and organizing."

"Security forces killed hundreds of protesters with impunity in November 2019, and they are doing it again now," said its director, Hadi Ghaemi.