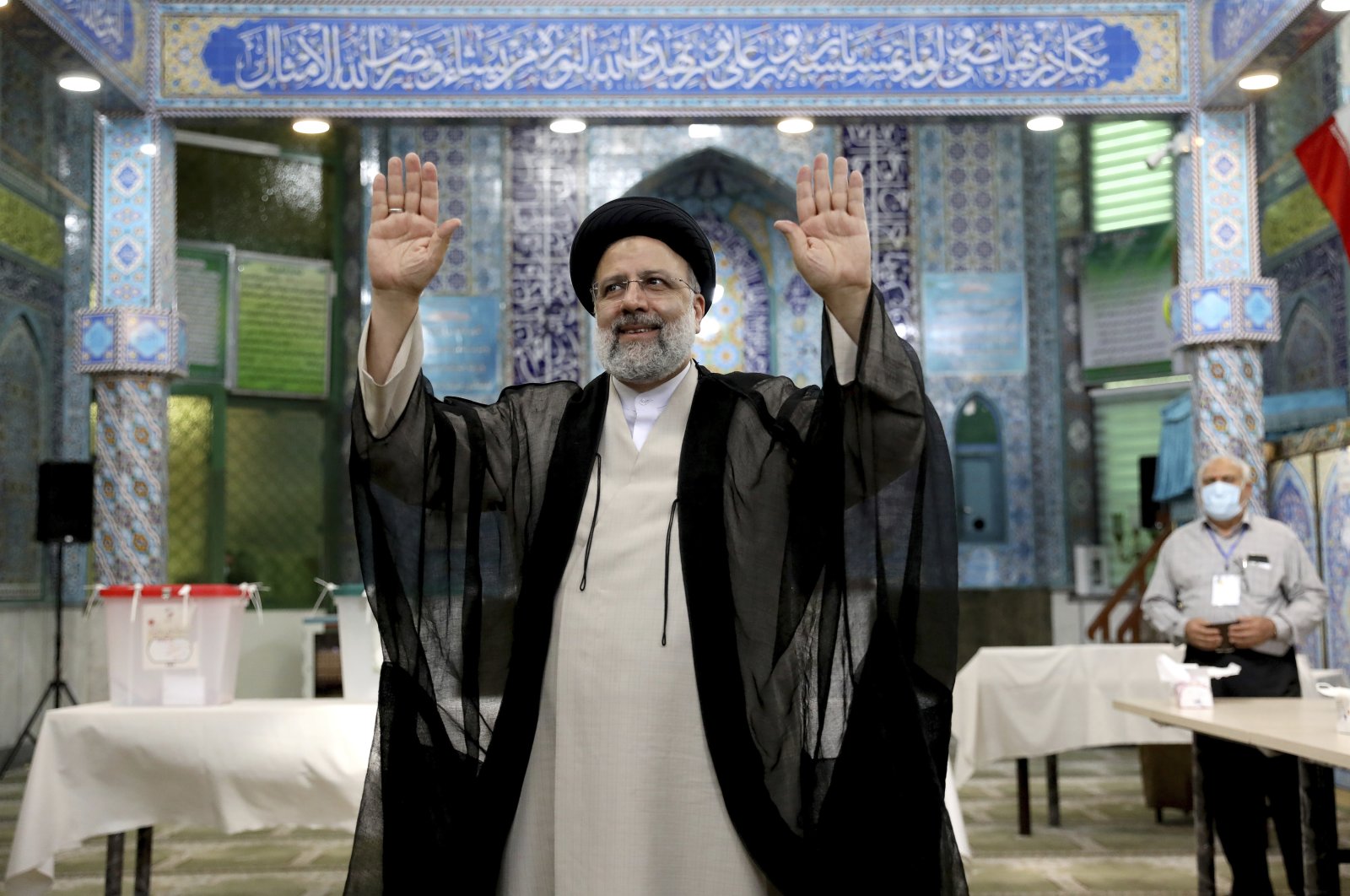 Ebrahim Raisi, a candidate in Iran's presidential elections waves to the media after casting his vote at a polling station in Tehran, Iran, June 18, 2021. (AP Photo)
by Agencies Jun 19, 2021 9:10 am
RECOMMENDED

Congratulations poured in for Iranian hard-line judiciary chief Ebrahim Raisi on Saturday for winning presidential elections even before official results were announced.

"I congratulate the people on their choice," said Rouhani. "My official congratulations will come later, but we know who got enough votes in this election and who is elected today by the people."

Both moderate and former Central Bank chief Abdolnasser Hemmati and former Revolutionary Guard commander Mohsen Rezaei offered their congratulations to Ebrahim Raisi. Counting, however, continued from Friday's vote and authorities have yet to offer any official results.

The initial results announced also appeared to show the race had the country's lowest turnout of any vote since the 1979 Islamic Revolution. However, the vote had no international observers to monitor the election in line with past years.

Opinion polling by state-linked organizations, along with analysts, indicated that Raisi – who already is under U.S. sanctions – was the front-runner in a field of only four candidates. That led to widespread apathy among eligible voters in the Islamic Republic, which long has held up turnout as a sign of support for the theocracy since the revolution.

Hemmati offered his congratulations on Instagram to Raisi early Saturday.

“I hope your administration provides causes for pride for the Islamic Republic of Iran, improves the economy and life with comfort and welfare for the great nation of Iran,” he wrote.

On Twitter, Rezaei praised Khamenei and the Iranian people for taking part in the vote.

“God willing, the decisive election of my esteemed brother, Ayatollah Dr. Seyyed Ebrahim Raisi, promises the establishment of a strong and popular government to solve the country’s problems,” Rezaei wrote.

As night fell Friday, turnout appeared far lower than in Iran’s last presidential election in 2017. At one polling place inside a mosque in central Tehran, a Shiite cleric played soccer with a young boy as most of its workers napped in a courtyard. At another, officials watched videos on their mobile phones as state television blared beside them, offering only tight shots of locations around the country –as opposed to the long, snaking lines of past elections.

Balloting came to a close at 2.a.m. Saturday, after the government extended voting to accommodate what it called “crowding” at several polling places nationwide. Paper ballots, stuffed into large plastic boxes, were to be counted by hand through the night, and authorities said they expected to have initial results and turnout figures Saturday morning at the earliest.

President Recep Tayyip Erdoğan also congratulated Ebrahim Raisi on his victory in Iran's presidential election on Saturday, saying he believed cooperation between the two neighbours would strengthen during Raisi's term.

"Stating my belief that cooperation between our two countries will strengthen during your presidency, I am ready to work together with you," Erdoğan said in a letter sent to Raisi.

Erdoğan added that he was looking forward to visiting Iran after the COVID-19 pandemic.