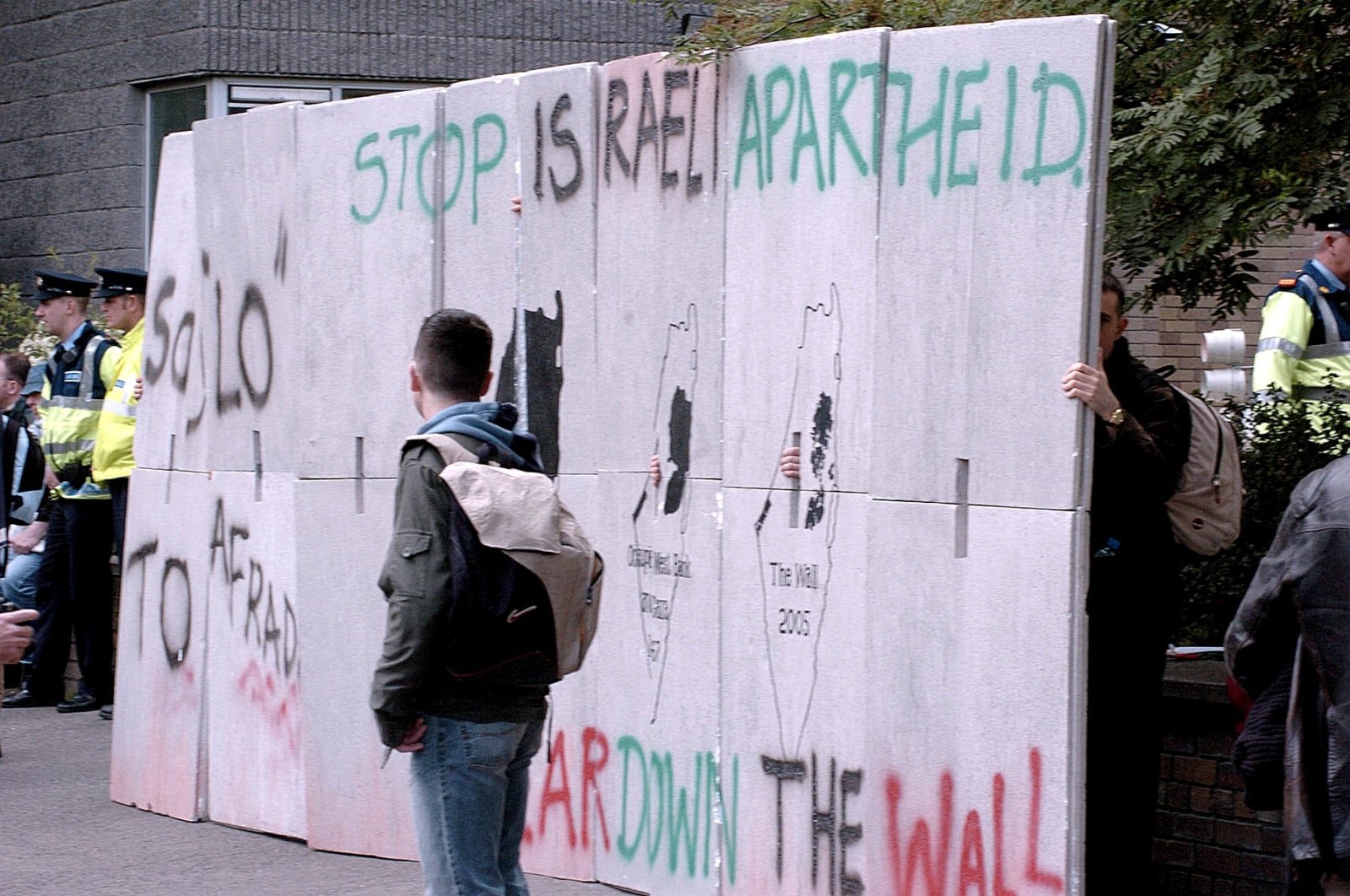 Protestors place a mock-up of the separation barrier between Israel and the occupied territories, during a demonstration outside the Israeli Embassy before the start of the World Cup qualifying soccer match between Israel and the Republic of Ireland, in Dublin, Ireland, June 4, 2005. (AP Photo)
by Daily Sabah with Reuters May 26, 2021 3:45 pm
RECOMMENDED

The Irish government on Tuesday supported a parliamentary motion condemning the "de facto annexation" of Palestinian land by Israeli authorities in what it said was the first use of the phrase by a European Union government in relation to Israel.

Irish Foreign Minister Simon Coveney, who has represented Ireland on the United Nations Security Council in debates on Israel in recent weeks, supported the motion and condemned what he described as Israel's "manifestly unequal" treatment of the Palestinian people.

"The scale, pace and strategic nature of Israel's actions on settlement expansion and the intent behind it have brought us to a point where we need to be honest about what is actually happening on the ground. ... It is de facto annexation," Coveney told parliament. "This is not something that I, or in my view this house, says lightly. We are the first EU state to do so. But it reflects the huge concern we have about the intent of the actions and of course, their impact," he said.

If adopted, the amendment will require the government to expel an Israeli ambassador to Ireland and impose economic, political and cultural sanctions against Israel.

Most countries view settlements Israel has built in territory captured in the 1967 Middle East war as illegal and as an obstacle to peace with the Palestinians.

Coveney also insisted on adding a condemnation of recent rocket attacks on Israel by Palestinian resistance group Hamas before he agreed to government support for the motion. During the session, some of the Irish parliamentarians wore masks with the Palestinian flag or with the checkered keffiyeh pattern in solidarity with Sheikh Jarrah and Palestine.

The motion came days after a cease-fire ended 11 days of Israeli airstrikes that killed over 250 people in Gaza and wounded 2,000 others. The violence sparked large pro-Palestinian protests in Dublin. The left-wing Sinn Fein refused to support the government amendment condemning Hamas attacks, a move which Ronan Burtenshaw, an editor at Tribune Magazine applauded.

"There is a growing consensus that Israel should be held to account for decades of occupation, dispossession and ethnic cleansing," he tweeted.

The latest military escalation started after clashes in East Jerusalem's Al-Aqsa Mosque compound, Islam's third holiest site. Israeli security forces had moved in on Palestinian worshippers there toward the end of the Muslim holy month of Ramadan. They had also sought to quell protests against the threatened eviction of Palestinian families from homes in the East Jerusalem neighborhood of Sheikh Jarrah to make way for Israeli settlers. The United Nations estimates that about 1,000 homes were destroyed.