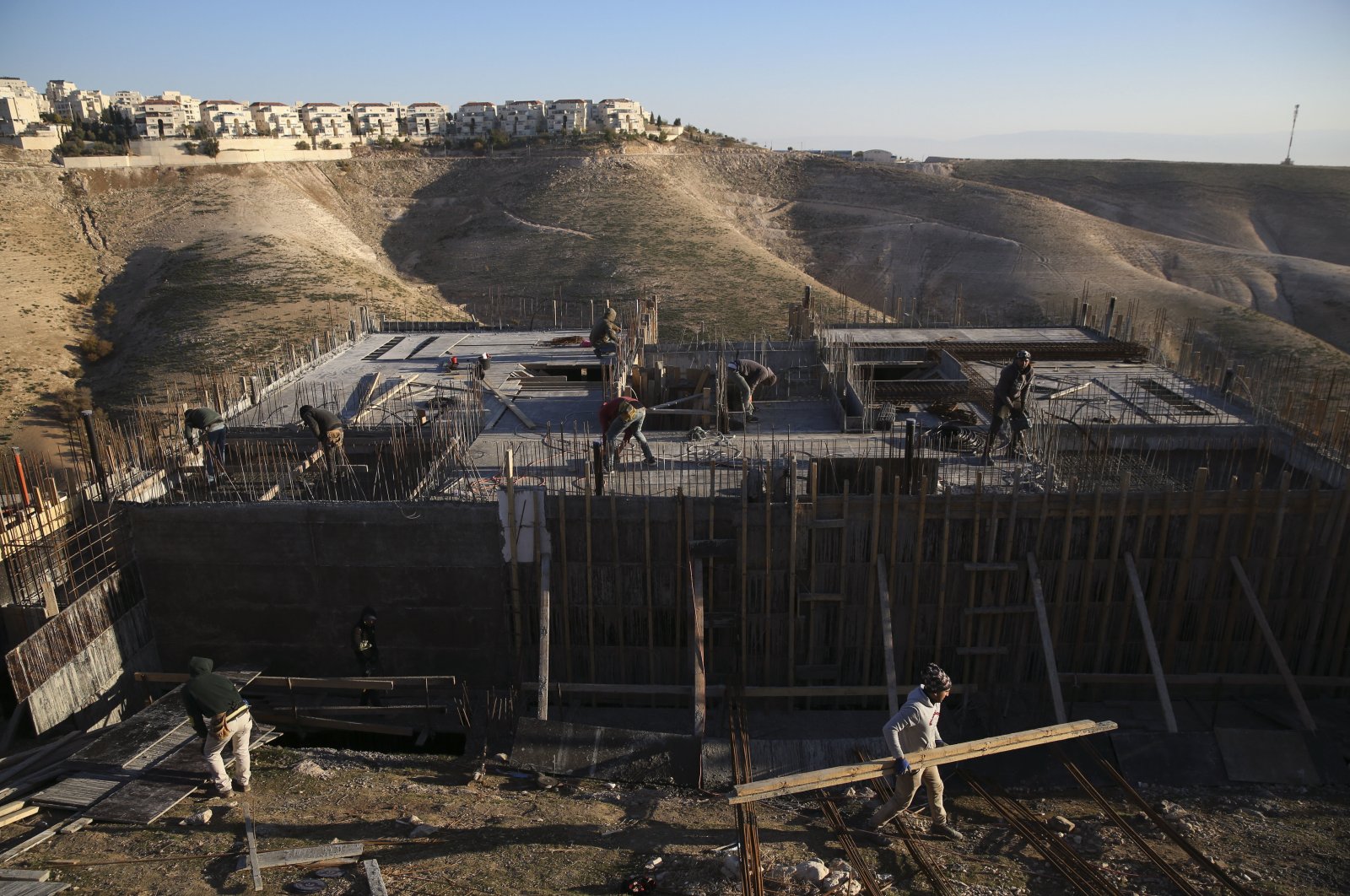 Palestinian laborers work at a construction site in the Israeli settlement of Maale Adumim, near Jerusalem, in the occupied West Bank, Palestine, Feb. 7, 2017. (AP Photo)
by Agencies
Oct 15, 2020 4:57 pm

Israel on Thursday moved forward with plans for more than 3,000 West Bank settlement homes, making 2020 one of the most prolific years for settlement building according to a settlement watchdog group.

Thursday's approvals, along with more than 2,000 new homes approved the day earlier, are part of a construction boom that has gained steam during the U.S. presidency of Donald Trump.

It also comes months after Israel promised to put on hold plans to annex parts of the occupied West Bank in exchange for a U.S.-brokered normalization deal with the United Arab Emirates (UAE).

The latest approvals raised the number of settlement homes to more than 12,150, according to Peace Now, the settlement watchdog group.

It is by far the highest number of approvals since Trump took office in early 2017, and since Peace Now began recording the figures in 2012.

The Palestinians seek to make all of the occupied West Bank and east Jerusalem part of an independent state. The annexation of West Bank settlements would infuriate the Palestinians as well as Israel's Arab neighbors and eliminate any lingering hope of establishing a viable Palestinian state.

A string of U.S. administrations, along with the rest of the international community, opposed Israeli settlement construction.

But Trump, surrounded by a team of advisers with close ties to the settler movement, has taken a different approach.

In contrast to its predecessors, the Trump administration has not criticized or condemned new settlement announcements, and in a landmark decision last year, Secretary of State Mike Pompeo said the U.S. does not consider settlements to be illegal under international law.

The Trump administration’s Mideast plan, unveiled early this year, calls for leaving 30% of the West Bank, including all of Israel’s more than 120 settlements, under permanent Israeli control.

Buoyed by Trump's stance, Israeli Prime Minister Benjamin Netanyahu intended earlier this year to push toward annexing the parts of the West Bank it would keep under the Trump plan.

But that plan was scuttled after the UAE deal was announced, with Abu Dhabi saying it made the demand in order to keep Palestinian hope alive.

Peace Now views the new construction as a "de facto annexation,” which threatens the possibility of a two-state solution to the Israeli-Palestinian conflict.

"Instead of taking advantage of the agreements with the Gulf states and promoting peace with the Palestinians, (Netanyahu) is distorting Israel’s priorities and catering to a fringe minority for these settlement unit approvals that will continue to harm future prospects for peace,” it said in a statement. Ahmad Majdalani, a Palestinian Cabinet minister, said Netanyahu was working "systematically to end the two-state solution through settlement activities."

He said he believed the wave of approvals this week was in response to concerns that Trump's challenger, Joe Biden, will likely be less accepting of settlement construction if elected.

"This year was the peak of his settlement activities because he wants to establish as much land as possible, fearing any change in the White House. Maybe that’s why just two weeks before American elections he pushed toward this decision,” he said.

The units allowed to move forward in different planning stages include hundreds of homes that were built illegally but were now being given retroactive approval. Peace Now said many of the approved homes stretch deep into the occupied West Bank.

The approvals add to a growing pipeline of construction that is expected to take off in the next few years. One of those plans would see the construction of 560 homes in Har Gilo, a strategically placed settlement between the Palestinian city of Bethlehem and Jerusalem.

Israel's plan to annex large areas of land in the occupied West Bank from Palestinians has drawn international criticism, with Turkey, the United Nations and the European Union voicing concern over the controversial move. Turkey has urged the international community to stand against Israel's unilateral and illegal move in the occupied Palestinian territories, stressing the adherence to the two-state solution based on the 1967 border between the two nations.