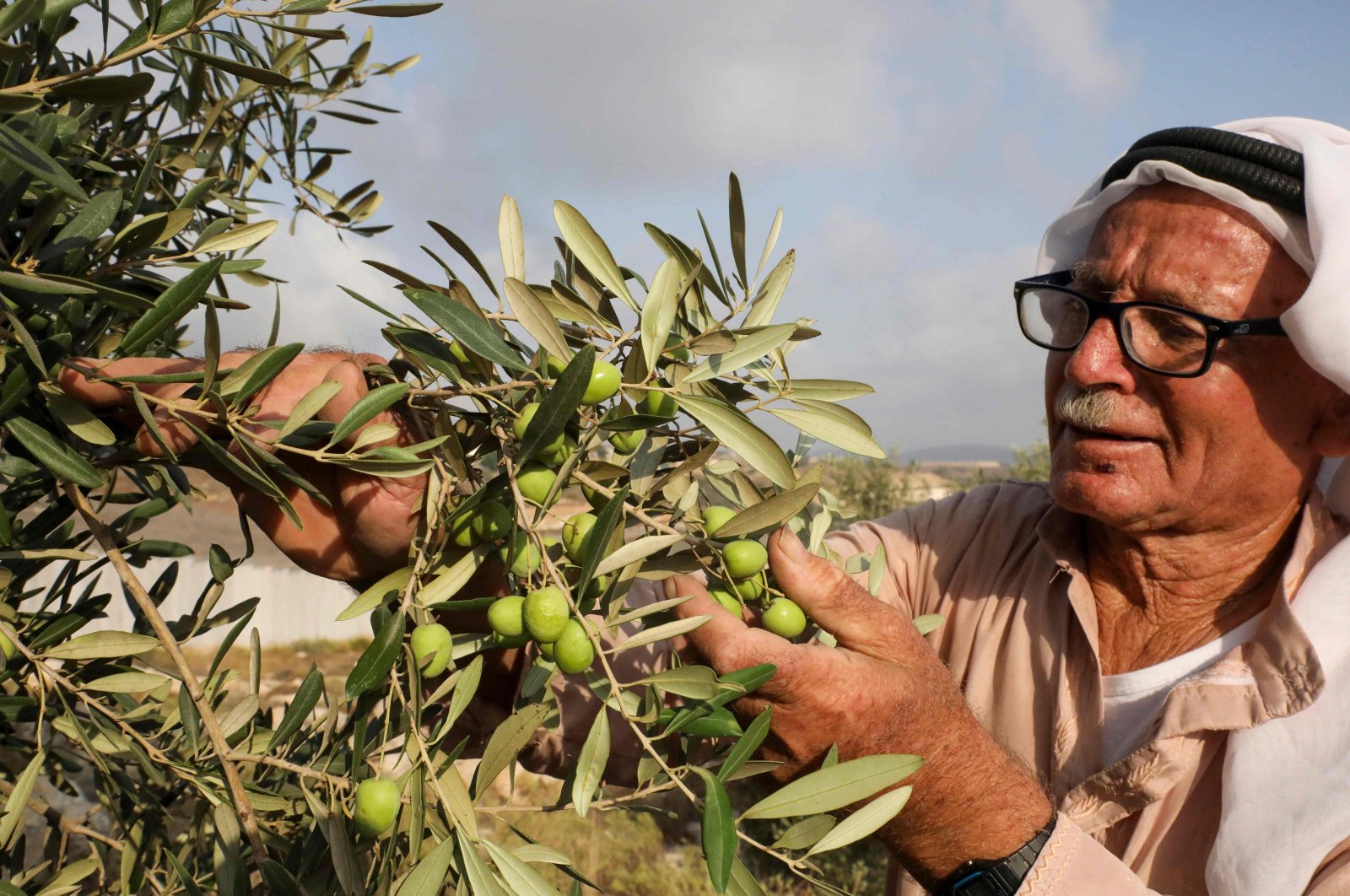 Palestinian farmer Abdel Hamid Sweity harvests olives from his trees in the West Bank village of Beit Awwa southwest of Hebron, near the Israeli separation barrier and the settlement of Sheqef (background), on Oct. 10, 2020. (AFP Photo)
by Compiled from Wire Services Oct 12, 2020 11:31 am
RECOMMENDED

Israel issued 20 military orders preventing Palestinian landowners from entering their own olive gardens in the occupied West Bank as Tel Aviv aims to seize hundreds of acres of Palestinian lands, the head of the National Committee to Resist the Wall and Settlements affiliated with the Palestine Liberation Organization (PLO) said Monday.

Israeli authorities issued the decisions preventing Palestinians from entering their own lands "despite the attacks of Jewish settlers on agricultural lands belonging to Palestinians" ahead of the olive harvest season, Walid Assaf told Anadolu Agency (AA).

According to the Geographic Information Systems Unit at the Land Research Centre's report, the orders targeted lands planted with olive trees in Hebron (Al-Khalil), Bethlehem, Ramallah and Nablus.

The military orders signed by the commander of the occupying army in the West Bank on Sept. 17, indicate that these lands were considered part of the area belonging to illegal settlements by the occupation forces.

While there was no comment from Israeli authorities on the official's claims, they generally cite "security reasons" when explaining their actions.

Since the olive harvest began on Oct. 7, Jewish settlers have been carrying out attacks against the farmers in various places across the occupied West Bank.

Netanyahu has asked for the Israeli Supreme Council for Planning and Building to convene in the West Bank following the Jewish holidays in early October.

The Israeli government has neither confirmed nor denied the latest development while Israeli settler leaders have protested against Netanyahu's failure to push the council to approve settlement projects.

Peace Now, a nongovernmental Israeli movement, said the government has approved the construction of 3,412 settlement units in eastern Jerusalem.

Israel has already demolished more than 500 structures in the West Bank and the Gaza Strip this year, OCHA said in late September. In a statement, the U.N. office said 506 buildings were razed by Israeli forces in the West Bank on the pretext of lacking a building permit.

According to the statement, a total of 134 structures were demolished in east Jerusalem. OCHA said Israeli forces brought down 22 buildings over the past four weeks, causing the displacement of 50 Palestinians and causing harm to around 200 others. According to the U.N. office, eight demolitions out of 12 in east Jerusalem were carried out by the owners themselves to avoid fines and fees imposed by the Israeli authorities.

Turning to the international community to halt Israeli demolition, Palestinians have long argued that the Israeli government uses the issue of security as an excuse to force them farther from the city and to expand settlement projects in the occupied territories.