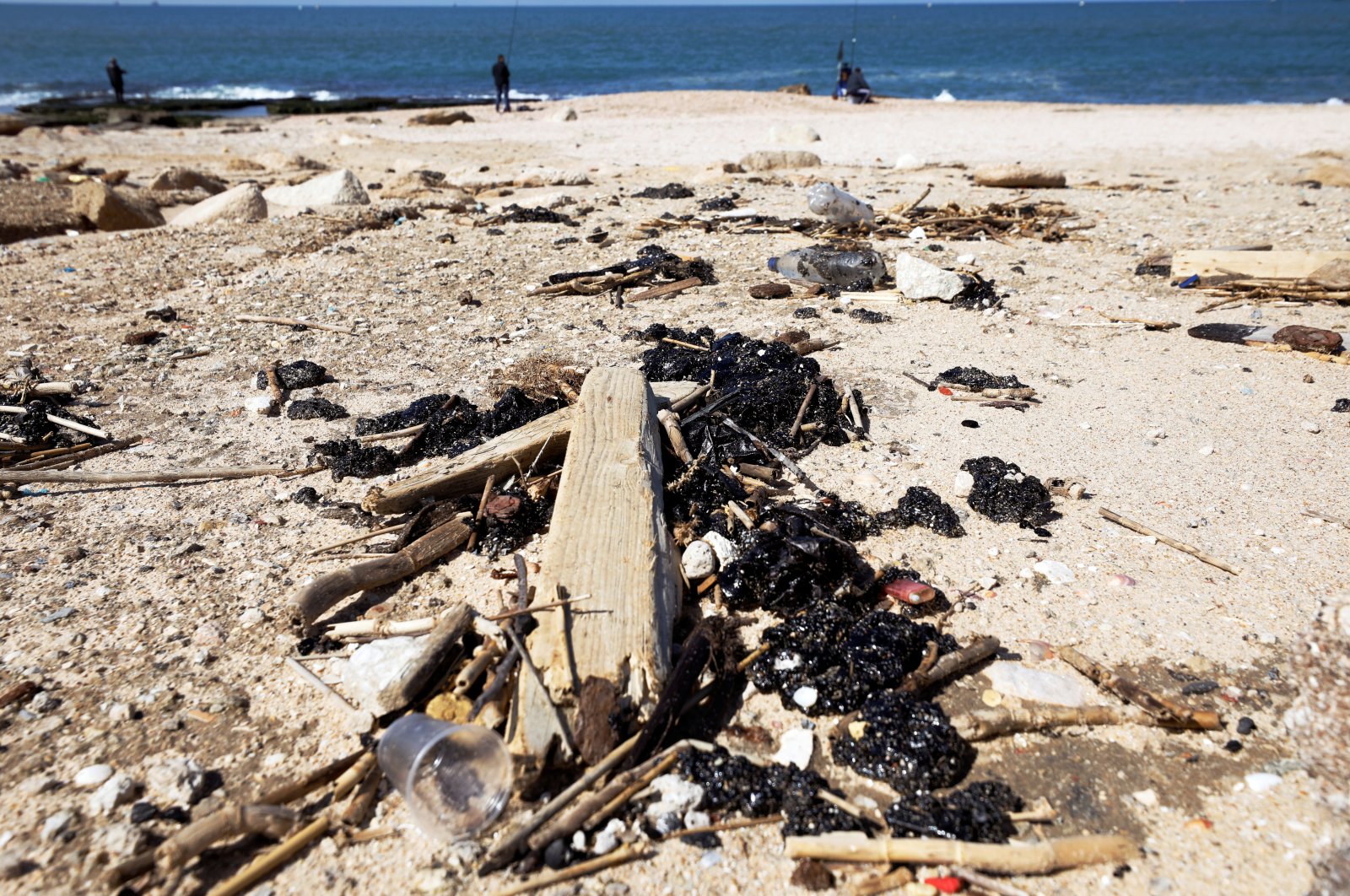 Clumps of tar are seen on the sand after an offshore oil spill drenched much of Israel's Mediterranean shoreline with tar, at a beach in Ashdod, southern Israel, Feb. 21, 2021. (Reuters Photo)
by ASSOCIATED PRESS Feb 22, 2021 10:34 am
RECOMMENDED

Israel closed all its Mediterranean beaches until further notice Sunday, days after an offshore oil spill deposited tons of tar across more than 100 miles (160 kilometers) of coastline in what officials are calling one of the country's worst ecological disasters.

The deposits have wreaked havoc on local wildlife, and the Israeli Agriculture Ministry determined Sunday that a dead young fin whale that washed up on a beach in southern Israel died from ingesting the viscous black liquid, according to Kan, Israel's public broadcaster.

Israel’s Nature and Parks Authority has called the spill "one of the most serious ecological disasters” in the country’s history.

In 2014, a crude oil spill in the Arava Desert caused extensive damage to one of the country's delicate ecosystems.

The Environmental Protection Ministry and activists estimate that at least 1,000 tons of tar, a product of an oil spill from a ship in the Eastern Mediterranean earlier this month, have already washed up onshore.

The ministry is trying to determine who is responsible. It declined to comment on details of the investigation because it was ongoing.

Yoav Ratner, coordinator of the ministry's oil spill contingency plan, said that there were still many "unknown unknowns” about the extent of the ecological damage and therefore it was difficult to say how long clean-up would take.

Thousands of volunteers took to the beaches on Saturday to help clean up the tar, and several were hospitalized after they inhaled toxic fumes. The military also deployed thousands of soldiers to assist in the operation.

The Environmental Protection, Health and Interior Ministries issued a joint statement Sunday warning the public not to visit the entire length of the country's 120-mile Mediterranean coastline, cautioning that "exposure to tar can be harmful to public health.”

Prime Minister Benjamin Netanyahu toured one of the country’s tar-pocked beaches on Sunday and praised the ministry’s work. Representatives from a coalition of Israeli environmental groups said in a press conference on Sunday that the ministry was woefully underfunded and that existing legislation did little to prevent or address environmental disasters.

Arik Rosenblum, director of the Israeli environmental group EcoOcean, said that the Environmental Protection Ministry is "fighting this situation and many other situations with their hands tied behind their back” because of inadequate legislation.

They cautioned that this disaster should be a wake-up call for opposition to a planned oil pipeline connecting the United Arab Emirates (UAE) and Israeli oil facilities in Eilat – home to endangered Red Sea coral reefs.