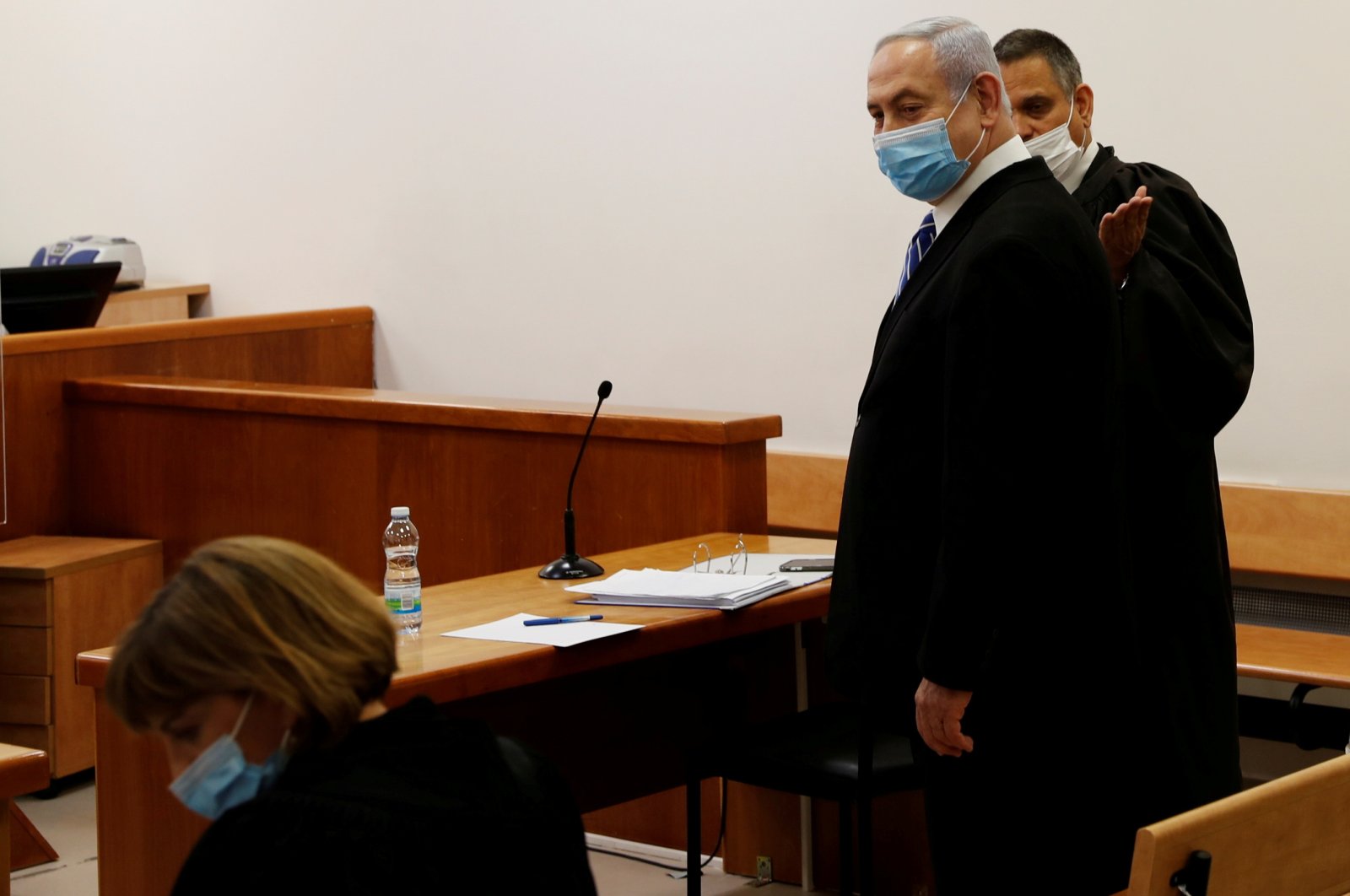 Israeli Prime Minister Benjamin Netanyahu, wearing a mask, stands inside the courtroom as his corruption trial opens at the Jerusalem District Court, Jerusalem, May 24, 2020. (Reuters Photo)
by Agencies Feb 08, 2021 10:19 am
RECOMMENDED

Israeli Prime Minister Benjamin Netanyahu on Monday pleaded not guilty to corruption charges at the resumption of his trial just weeks before national elections in which he hopes to extend his 12-year rule.

"I confirm the written answer submitted in my name," Netanyahu said, standing before a three-judge panel in a heavily guarded Jerusalem District Court, as Reuters reported. He was referring to a document his lawyers gave the court last month in which they argued he was not guilty of charges of bribery, breach of trust and fraud.

In recent months, Israelis have held weekly protests calling on Netanyahu to resign over the charges and criticizing his government's response to the coronavirus crisis. Protesters gathered outside the courthouse could be heard inside the room where the hearing was being held.

He stands accused of accepting lavish gifts from wealthy friends and offering to grant favors to powerful media moguls in exchange for favorable coverage of him and his family.

The latest hearing was postponed last month due to lockdown restrictions on public gatherings. Israel’s longest serving leader is also the first sitting prime minister to go on trial for corruption. Israeli law requires Cabinet ministers to resign when charged with criminal offenses, but does not specifically address the case of a prime minister under indictment.

Netanyahu has denied any wrongdoing and has dismissed the charges against him as a "witch hunt” orchestrated by biased law enforcement and media. He has refused to step down and has used his office as a bully pulpit against critics and the criminal justice system. At the start of his trial last May, Netanyahu was flanked by a cohort of Likud party allies as he railed against the media, police, judges and prosecutors, according to The Associated Press (AP).

He said the trial aimed to "depose a strong, right-wing prime minister, and thus remove the nationalist camp from the leadership of the country for many years.” Netanyahu has served as Israel's prime minister since 2009, and in the past two years has managed to hang onto power through three tumultuous, deadlocked elections.

His flimsy ruling coalition collapsed in December, and he now faces a major battle for reelection in March 23 parliamentary elections. Netanyahu hopes to campaign on having pulled the country out of the pandemic through one of the world's most successful vaccination campaigns. He boasts of having personally secured millions of doses from major drug makers, allowing Israel to vaccinated more than a third of its population of 9.3 million. He hopes to vaccinate the entire adult population by late March. But his government has faced heavy criticism for other aspects of its response to the crisis.

The country is only now starting to emerge from its third nationwide lockdown, and the closures have sent unemployment skyrocketing. An emergency government formed last May to combat the coronavirus outbreak has been mired in bickering. The country's leaders have struggled to enact consistent policies and repeatedly accused each other of playing politics with the pandemic.

Israel has meanwhile reported nearly 700,000 cases since the outbreak began, including 5,121 deaths.

One major controversy concerns Israel's ultra-Orthodox Jewish community, many of whom have openly flouted restrictions on public gatherings. Netanyahu will need the ultra-Orthodox parties to form a ruling coalition, and his critics accuse him of turning a blind eye to their violations.

Polls show Netanyahu's Likud winning the most seats but struggling to form a 61-seat majority coalition in the Knesset, Israel's parliament. The margin of victory could be extremely tight, potentially allowing a small, fringe party to decide who heads the next government.