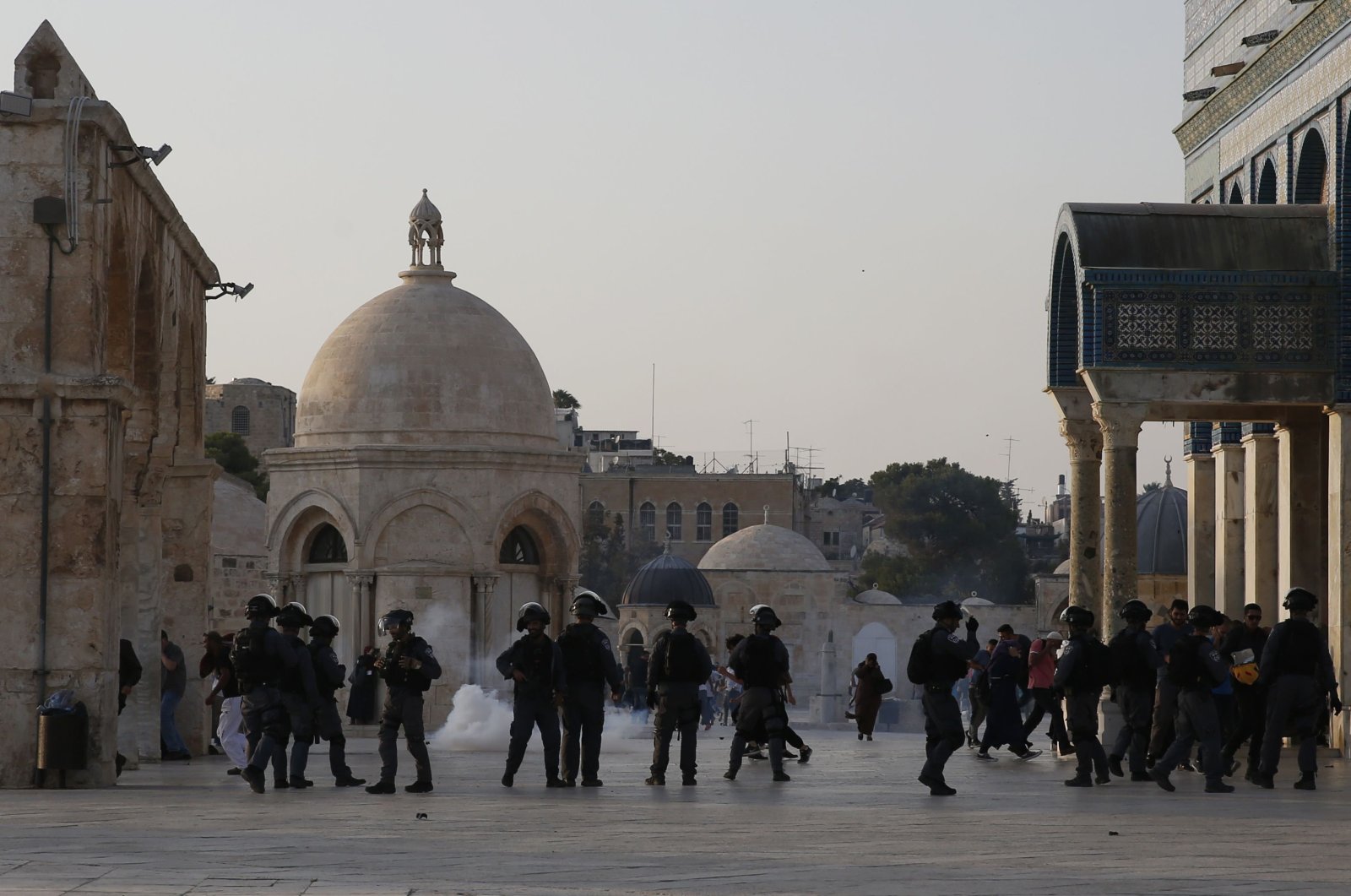 According to an Anadolu Agency (AA) correspondent, Israeli police stopped worshipers from the West Bank at checkpoints at entrances to the Old City in Jerusalem and allowed only a very small number of them to reach Al-Aqsa Mosque after identity checks.

The Palestinians, who were prevented from reaching Al-Aqsa Mosque, performed Friday prayers on the streets near the Old City. The Israeli police erected checkpoints at the entrances to the Old City in the morning.

Al-Aqsa Sheikh imam Yusuf Abu Sneina denounced in the Friday sermon "the repeated prevention of worshipers from reaching the mosque."

"It is not permissible under any circumstances to continue preventing worshipers from reaching the mosque to perform prayer," Abu Sneina said, adding that this is the fourth consecutive Friday that the residents of the West Bank have been prevented from reaching Al-Aqsa Mosque.

Israel captured the West Bank during the 1967 war, better known as the Six-Day War. Since then, more than 700,000 Israelis have moved into settlements in the West Bank and east Jerusalem.

The Palestinians want to form an independent state comprised of all of the West Bank and east Jerusalem. The annexation of West Bank settlements would infuriate the Palestinians and Israel's Arab neighbors and eliminate any lingering hopes of establishing a viable Palestinian state.

There are also concerns that an Israeli push to promote tourism to Al-Aqsa could heighten tensions, as the Jewish state does not have sovereignty over the holy shrine, which is governed by the Jordanian Islamic Waqf. The hilltop esplanade in the Old City, home to Al-Aqsa Mosque and the iconic Dome of the Rock shrine, is the third holiest site in Islam. It is also the holiest site for Jews, who refer to it as the Temple Mount because it was the location of two biblical temples in ancient times.

Meanwhile, the U.S.-brokered deal between the United Arab Emirates (UAE) and Israel escalated the rivalry for religious control of Jerusalem's Al-Aqsa Mosque.

"All Muslims who come in peace may visit and pray at Al-Aqsa Mosque, and Jerusalem's other holy sites should remain open for peaceful worshippers of all faiths," the joint statement from the U.S., the UAE and Israel said in August.

This declaration, however, has significantly challenged the status quo in Jerusalem in favor of Israel.

It is possible that the UAE is acting in concert with Israeli settlers and far-right extremists in an attempt to undermine the authority of the Jordanian and Palestinian Supreme Muslim Council over the holy site. On Oct. 18, an Abu Dhabi delegation visited Al-Aqsa Mosque with the protection of Israeli forces, prompting criticism from Palestinian Prime Minister Muhammad Shtayyeh.

"It is sad to see some Arab delegations entering the compound through the Israeli gate, while worshippers are denied access to it to perform their prayers,” he said.

Last week, Khaled Abu Arafa, a former Palestinian minister of Jerusalem affairs, told the Middle East Eye (MEE) that the Israeli-Emirati deal "raises concern and fears among the Jordanians and Palestinians, because it aims to give the UAE a new role inside Al-Aqsa.”

A few days after his statement, Abu Arafa was arrested by Israeli forces and taken to Ofer Prison.

To legitimize its normalization deal with Israel, the UAE says that the agreement gives more freedom of access to Muslims to visit the holy mosque.

Sammour, however, attributed this step to Abu Dhabi's belief that the measures, which generally antagonize Muslims, would prompt the international community to turn a blind eye to its human rights violations, both domestically and abroad.