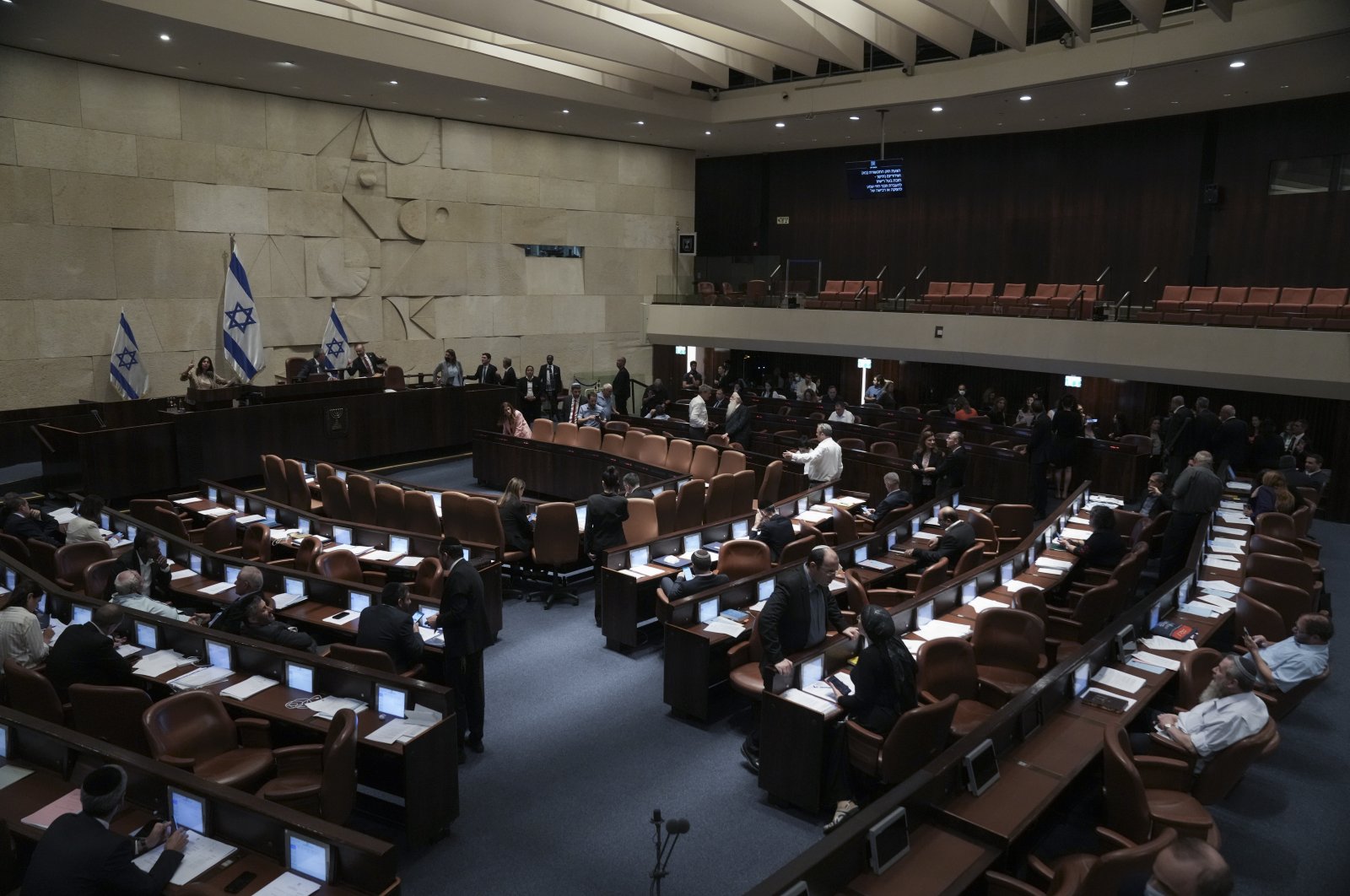 Lawmakers attend a preliminary vote on a bill to dissolve parliament, at the Knesset, Israel's parliament, in Jerusalem, June 22, 2022. (AP PHOTO)
by Agencies Jun 20, 2022 7:00 pm
RECOMMENDED

The election, expected this fall, would be Israel’s fifth in three years. The vote could bring about the return of a nationalist religious government led by former Prime Minister Benjamin Netanyahu or another prolonged period of political gridlock.

The previous four elections, which focused on Netanyahu's fitness to rule while on trial for corruption charges, ended in deadlock.

In a nationally televised news conference, Bennett said it wasn't easy to disband the government, but he called it “the right decision for Israel.”

The fragile coalition government, which includes parties from across the political spectrum, lost its majority earlier this year and has faced rebellions from different lawmakers in recent weeks.

Foreign Minister Yair Lapid will take over from Bennett on an interim basis in an agreement they announced together.

Bennett listed a series of accomplishments and promised an “orderly” transition.

Lapid thanked Bennett for putting the country ahead of his personal interests.

“Even if we’re going to elections in a few months, our challenges as a state cannot wait,” Lapid said.

It included a diverse array of parties, from dovish factions that support an end to Israel's occupation of lands captured in 1967, to hard-line parties that oppose Palestinian independence. Often described as a political “experiment,” it made history by becoming the first Israeli coalition government to include an Arab party.

The alliance made a series of accomplishments, including passing the first national budget in several years and navigating a pair of coronavirus outbreaks without imposing any lockdowns.

But eventually, it unraveled, in large part because several members of Bennett's hard-line party objected to what they felt were compromises made by him to keep the coalition afloat and his perceived moderation.

The immediate cause for Bennett's decision was the looming expiration of laws that grant West Bank settlers special legal status. If those laws were to expire, settlers would be subject to many of the military laws that apply to the territory's more than 2 million Palestinians.

Parliament was to vote to extend the laws earlier this month. But the hard-line opposition, comprised heavily of settler supporters, paradoxically voted against the bill in order to embarrass the government. Dovish members of the coalition who normally oppose the settlements voted in favor of the bill in hopes of keeping the government afloat.

By dissolving parliament, the laws remain in effect. Bennett, a former settler leader, said that if he had allowed the laws to expire, there would have been “grave security perils and constitutional chaos.”

“I couldn’t let that happen,” he said.

The dissolution threatened to overshadow a visit scheduled by U.S.President Joe Biden scheduled for next month. The U.S. Embassy said it assumed that the visit would take place as planned.

Netanyahu described the imminent dissolution of parliament as “great tidings” for millions of Israelis, and he said he would form “a broad nationalist government headed by Likud” after the upcoming elections.

Israel held four inconclusive elections between 2019 and 2021 that were largely referendums about Netanyahu’s ability to rule while on trial for corruption. Netanyahu denies wrongdoing.

Opinion polls have forecast that Netanyahu’s hard-line Likud will once again emerge as the largest single party. But it remains unclear whether he would be able to muster the required support of a majority of lawmakers to form a new government.