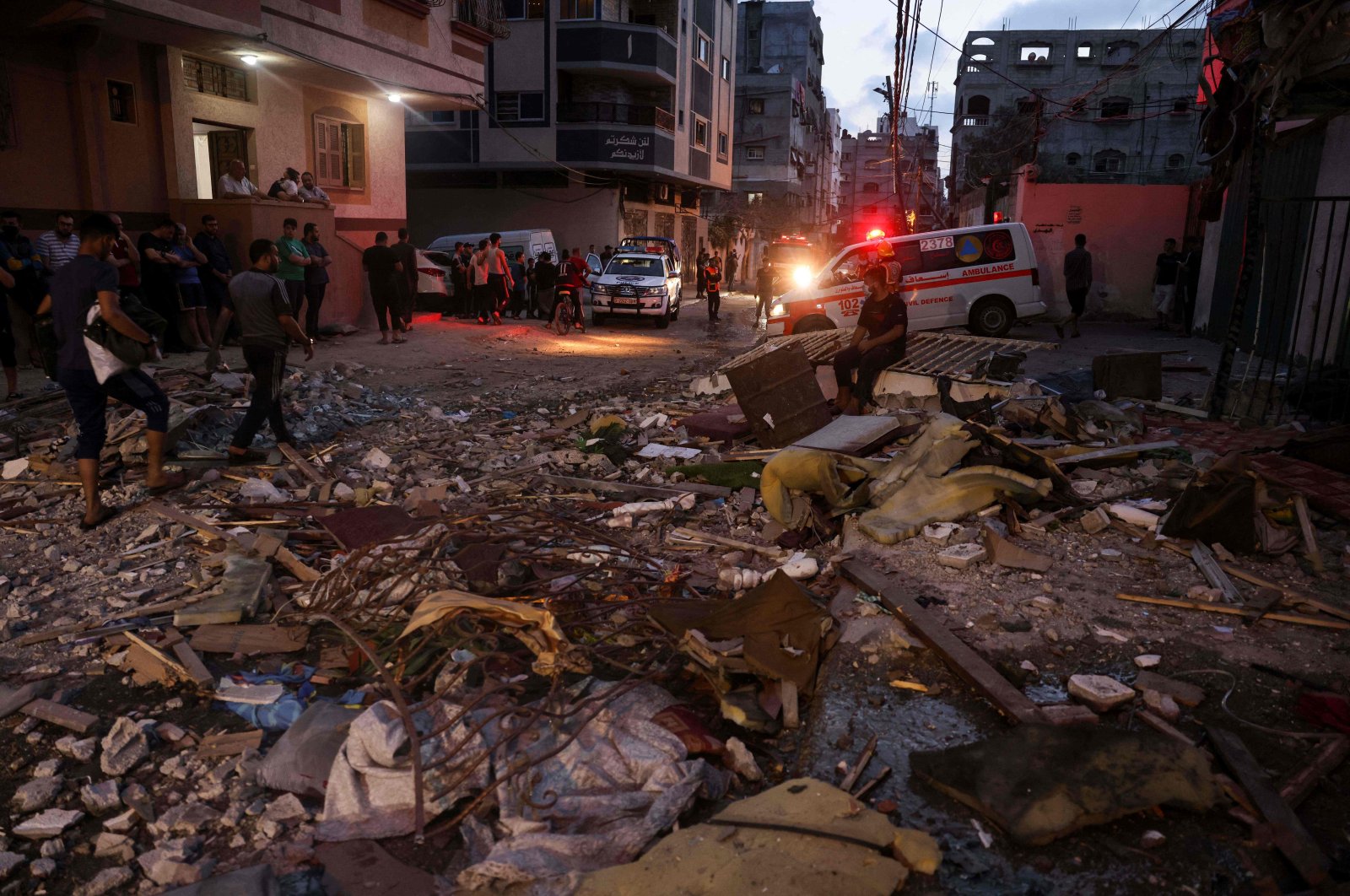 Palestinians stand in the rubble of an apartment destroyed by Israeli airstrikes in the Gaza Strip, Palestine, May 11, 2021. (AFP Photo)
by ASSOCIATED PRESS May 11, 2021 1:27 pm
RECOMMENDED

Israeli Defense Minister Benny Gantz on Tuesday ordered the mobilization of 5,000 reserve troops amid Israeli violence against Palestinians in Gaza, Jerusalem and the West Bank.

The additional soldiers are to be assigned to the southern regional command of the armed forces, among others, the minister's office said in the statement.

Meanwhile, Israel unleashed new airstrikes on Gaza early Tuesday, hitting a high-rise building. The escalation in the conflict was sparked by weeks of Israeli aggression in contested Jerusalem.

Since sundown Monday, 24 Palestinians – including nine children – were killed in Gaza, most by airstrikes, Gaza health officials said.

The exchange of fire was preceded Monday by hours of Israeli forces' aggression against Palestinians, including dramatic confrontations at Jerusalem's Al-Aqsa Mosque compound, a sacred site to both Jews and Muslims. In fighting in the contested city and across the West Bank, more than 700 Palestinians were hurt, including nearly 500 who were treated at hospitals.

In a sign of widening unrest, hundreds of residents of Arab communities across Israel staged overnight demonstrations – denouncing the recent actions of Israeli forces against Palestinians – in one of the largest protests by Palestinian citizens in Israel in recent years.

Israeli Prime Minister Benjamin Netanyahu warned Monday that fighting could “continue for some time.” Lt. Col. Jonathan Conricus, an Israeli military spokesperson, told reporters Tuesday that the military was in “the early stages” of strikes against Gaza targets that it had planned well in advance.

The escalation comes at a time of political limbo in Israel.

Netanyahu has been acting as a caretaker prime minister since an inconclusive parliamentary election in March. He tried and failed to form a coalition government with his hard-line and ultra-Orthodox allies, and the task was handed to his political rivals last week. One of those rivals is Israel's defense minister who is overseeing the Gaza campaign. It is not clear if and to what extent the toxic political atmosphere is spilling over into military decision-making, though the rival camps have unanimously expressed support for striking Hamas hard.

Israeli media have reported that the new round of violence is slowing efforts by Netanyahu's rivals to form a ruling coalition among parties with a broad range of ideologies, but a shared goal of toppling Netanyahu. The support of an Arab-backed party is key for the anti-Netanyahu bloc's efforts. The party's leader, Mansour Abbas, has essentially said he'll work with whatever political camp offers the most improvements in Arab communities, but the current tensions might deter him from joining a coalition, at least for now.

The current round of Israeli violence in Jerusalem coincided with the start of the Muslim fasting month of Ramadan in mid-April. Critics say heavy-handed police measures helped stoke nightly unrest, including a decision to temporarily seal off a popular gathering spot where Palestinian residents would meet after evening prayers. Another flashpoint was the Jerusalem neighborhood of Sheikh Jarrah, where dozens of Palestinians are under threat of eviction by Jewish settlers.

Over the weekend, confrontations erupted at the Al-Aqsa Mosque compound, which is the third holiest site of Islam and the holiest site in Judaism.

Israel’s tactics in Jerusalem have drawn angry reactions from the Muslim world.

The 57-nation Organization of Islamic Cooperation is holding an emergency meeting of its permanent representatives in Jiddah to discuss the tensions.