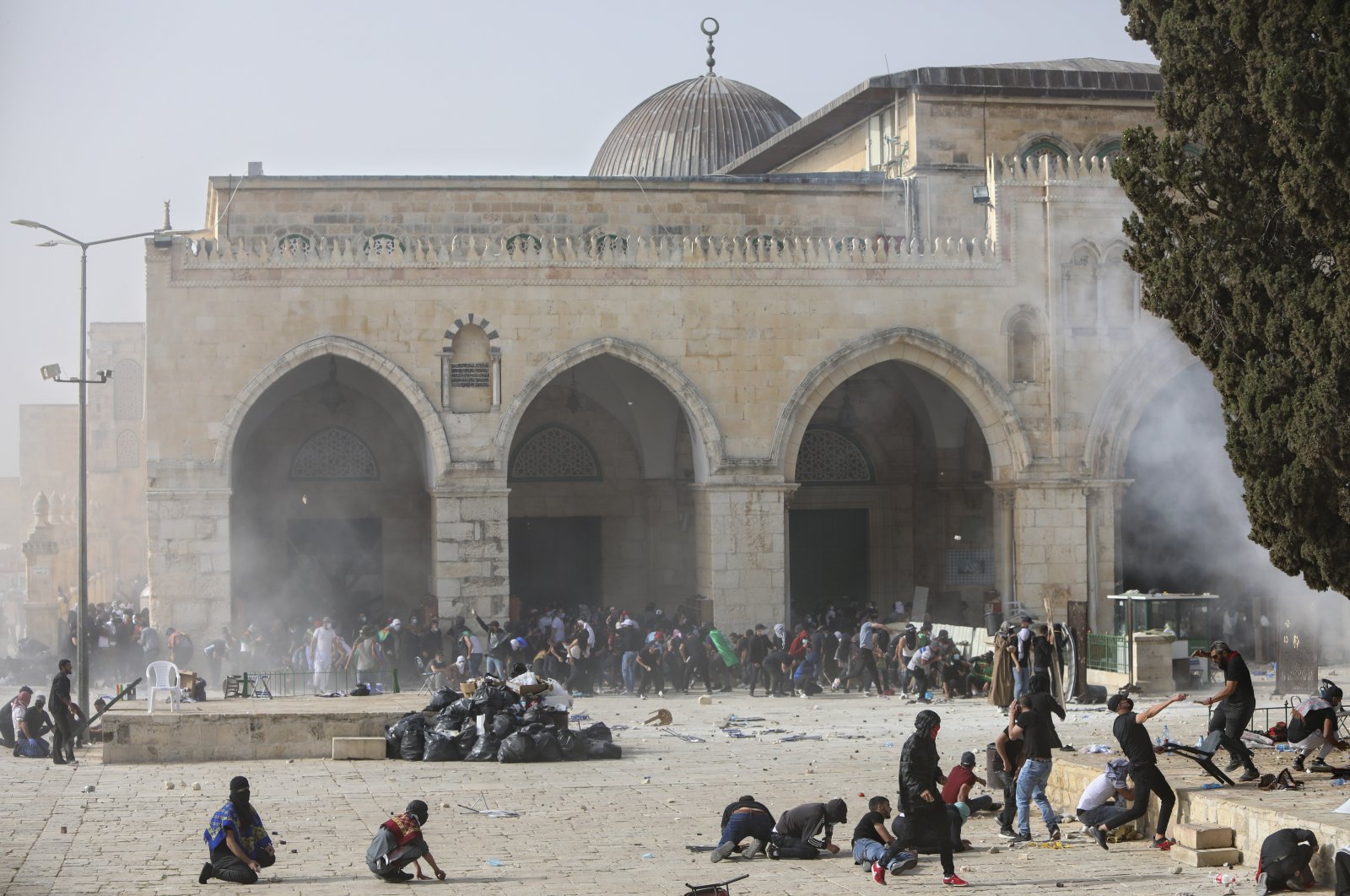 Over 200 Palestinians have been injured in Israeli aggression near Al-Aqsa mosque, as security forces used tear gas, stun grenades and rubber bullets against the Palestinians. The action, however, led more people to gather near the Islamic holy site and protest the ongoing police violence.

Thousands of Palestinians staged protests inside the Al-Aqsa Mosque, after performing the dawn prayers there. The Palestinians then stayed at the site to guard the mosque against raids by extremist Israelis.

Setting up barricades at some points of Haram al-Sharif, Al-Aqsa's main building, they chanted slogans pledging not to leave.

Israeli police threw more than a dozen tear gas canisters and stun grenades inside the Al-Aqsa mosque. Smoke rose in front of the mosque and the iconic golden-domed shrine on the site and rocks littered the surrounding plaza.

More than 270 Palestinians were injured, including 205 who went to hospitals and clinics for treatment, according to the Palestinian Red Crescent. Of the injured, five were in serious condition.

The Associated Press (AP) reported that the police fired tear gas and stun grenades into the mosque at a point when about 400 people, both young protesters and older worshippers, were inside the carpeted Al-Aqsa Mosque.

Tensions in Jerusalem have soared in recent weeks as Palestinians have protested against Israel's restricting access to parts of the Old City during the Muslim holy month of Ramadan and after authorities ordered several Palestinian families to leave their homes to make way for Israeli settlers.

Earlier, police barred Jews from visiting the site Monday, which Israelis mark as "Jerusalem Day." The police decision came hours before a planned march by hardline Israeli nationalists through the Muslim Quarter of Jerusalem’s Old City, an annual event widely perceived as a provocative display of Israeli occupation over the contested city. Police have allowed the flag-waving parade to take place despite growing concerns that it could further fan the flames.

Israeli violence has occurred almost nightly throughout Ramadan, beginning when Israel blocked off a popular spot where Muslims traditionally gather each night at the end of their fast. Israel later removed the restrictions, but clashes quickly resumed amid tensions over the planned eviction of Palestinians from the Arab neighborhood of Sheikh Jarrah.

After several days of aggression, Israel has come under growing international criticism for its heavy-handed actions at the site, particularly during Ramadan.

Israel’s Supreme Court postponed a key ruling Monday that could have forced dozens of Palestinians from their homes, citing the “circumstances.”

The Israeli crackdown and planned evictions have drawn harsh condemnations from Israel’s Arab allies and expressions of concern from the U.S., European Union and United Nations.

The police violence in Jerusalem threatens to reverberate throughout the region.

There are currently some 650,000 Jews living in East Jerusalem and the West Bank amid an estimated 3.1 million Palestinians.

Israeli forces attacked journalists at Al-Aqsa Mosque as they were covering events at the holy site, according to an Anadolu Agency (AA) reporter on the ground.

AA's photographer Fayez Abu Rumaila was assaulted by Israeli forces as he was following the situation inside the mosque.

Mustafa Kharouf, the agency's photojournalist, was also hit in the chest with a rubber bullet and taken to hospital for treatment.

Palestinian resistance group Hamas said Israel was waging a "religious war against Palestinian worshipers" in the occupied city of Jerusalem.

"What is happening inside the Al-Aqsa Mosque at the time of storming and assaulting worshipers is proof of the brutality of the Zionist occupation," Muhammad Hamadeh, the movement's spokesperson for the city of Jerusalem, said.

He called on the Palestinians to "remain steadfast and prevent settlers from entering Al-Aqsa."

The Hamas spokesperson held Israel responsible for its "incursion into the Al-Aqsa Mosque," saying: "The occupation will pay a heavy price."

Hussein al-Sheikh, the advisor to Palestinian President Mahmoud Abbas, criticized the "storming" of the Al-Aqsa by Israeli police officers and said the Palestinian leadership was keeping all options open for its response.

Jordan's Foreign Ministry summoned the Israeli charge d'affairs in Amman to protest and condemn Israeli violations against worshippers, as well as the latest attacks and people in East Jerusalem's Sheikh Jarrah.

Many Palestinian families are facing imminent eviction in the Sheikh Jarrah neighborhood of East Jerusalem as Israel continues to transfer illegal Jewish settlers to the region.

According to human rights groups, the move highlights an array of discriminatory policies aimed at pushing Palestinians out of Jerusalem to preserve its Jewish majority. The Israeli rights group B’Tselem and the New York-based Human Rights Watch (HRW) both pointed to the policies when justifying that Israel has become an apartheid regime.

Israel views all of Jerusalem as its unified capital and says its residents are treated equally. But East Jerusalem residents have different rights depending on whether they are Jewish or Palestinian.

Palestinians born in East Jerusalem are granted a form of permanent residency that can be revoked if they spend too much time living outside the city. They can apply for Israeli citizenship but must go through a difficult and uncertain bureaucratic process that can take months to years. Most refuse as they do not recognize Israel’s annexation.

Palestinians are also treated differently when it comes to housing, which will make it difficult for the Sheikh Jarrah families to remain in Jerusalem if they are evicted.

After 1967, Israel expanded the city’s municipal boundaries to take in large areas of open land where it has since built Jewish settlements that are home to tens of thousands of people. At the same time, it set the boundaries of Palestinian neighborhoods, restricting their growth.

Today, more than 220,000 Jews live in East Jerusalem, mostly in built-up areas that Israel considers to be neighborhoods of its capital. Most of East Jerusalem’s 350,000 Palestinian residents are crammed into overcrowded neighborhoods where there is little room to build.

In complete disregard of the rights of Palestinians and international calls to stop, Israel's Prime Minister Benjamin Netanyahu said his administration will continue to build illegal settlements in East Jerusalem.

Speaking after a Cabinet meeting, Netanyahu rejected calls by the U.S. and European states to halt the forceful evictions of Palestinian families in occupied East Jerusalem's Sheikh Jarrah neighborhood.

Claiming that Jerusalem has been the capital of the Jewish people for thousands of years, he said: "As every nation builds in its capital, we too have the right to build in Jerusalem. This is what we have done and this is what we will continue to do."

"We will not allow any extremist party to disturb the peace of Jerusalem. We will maintain the rule of law and order firmly and responsibly. We will continue to uphold freedom of worship for all religions but we will not allow violent disturbances," he added.