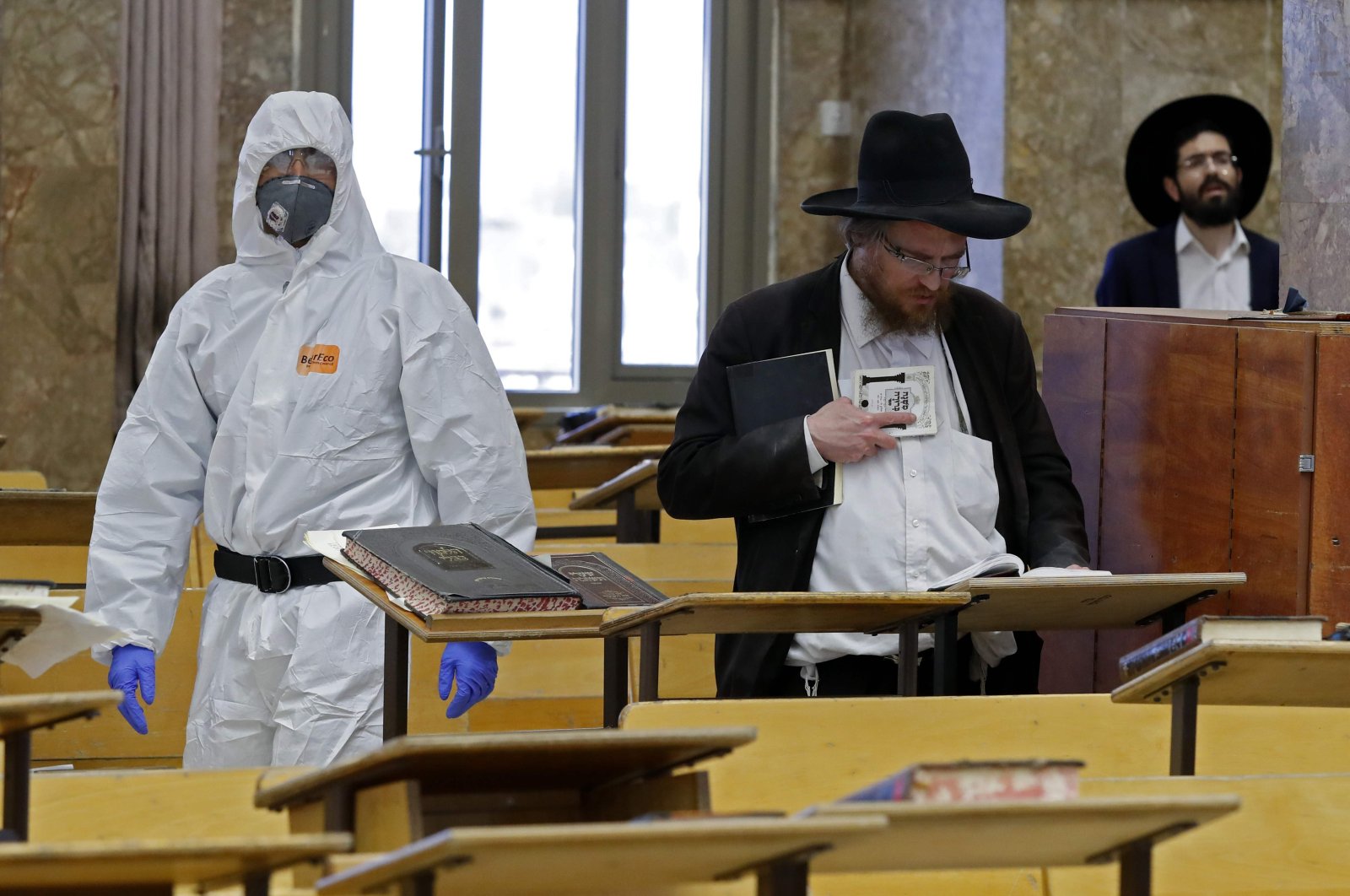 In this file photo, an Israeli police officer, dressed in a protective outfit, enters a yeshiva (a Jewish educational institution for studies of traditional religious texts) in the Israeli city of Bnei Brak during a check to ensure that social distancing measures imposed by Israeli authorities meant to curb the spread of the coronavirus are being followed, April 2, 2020. (AFP Photo)
by Daily Sabah with Wires Sep 03, 2020 11:27 am
RECOMMENDED

The Health Ministry said 3,073 infections were detected over the past 24 hours, the highest daily tally in Israel since the start of the outbreak. Over the past three months, the average daily figure in the country has remained between 1,500 to 2,000. The total number of COVID-19 cases now stands at 122,539, including 969 deaths and 97,872 recoveries, according to the ministry.

At least 418 of the patients are in critical condition, among them 118 are intubated it said. Out of 34,131 people who were screened for the coronavirus, about 9%, or 3,074, had tested positive for the disease Wednesday.

Coronavirus infections have been on the rise in Israel since June, despite several containment measures taken by the government.

According to COVID-19 commissioner professor Ronni Gamzu, Thursday morning's spike in infections is a result of the opening of yeshivas, Jewish educational institutions for studies of traditional religious texts, two weeks ago. Gamzu told The Jerusalem Post that “the real issue is how the general population is involved.”

On Wednesday Israeli media reported that the group of teenagers gathered together for a back-to-school party in Beersheba without following COVID-19 restrictions such as wearing masks or social distancing. As a result, all 107 students had to self-quarantine as one of the attendees was infected with the coronavirus. Such gatherings, parties and concerts also were organized in the Hefer Valley region and Dimona.

Israeli KAN news reported that the new data “will force the Cabinet to decide on significant restrictions in red cities. The new figure may give impetus to a renewed demand for lockdown or extensive nationwide restrictions.”

Science and Technology Minister Izhar Shay urged that “we must prevent the flooding of hospitals and reduce the number of patients."

“Extend the closure of educational institutions; reduce the number of meetings between people,” Shay told Israel's media. “It is in our hands,” he added.

The country's government has received criticism amid a resurgence in coronavirus cases after restrictions were lifted starting in late April. Dozens of protesters demanded that Israeli Prime Minister Benjamin Netanyahu resign over several corruption indictments and his handling of the coronavirus crisis. At the start of the pandemic, Netanyahu moved quickly to close the country's borders and impose strict measures to contain the virus. However, by May, Israel was among the first in the world to reopen its economy. Netanyahu boasted on TV that other countries were looking to Israel as a model. But the exit strategy appears to have been bungled. Now facing a drastic surge in confirmed COVID-19 cases, the country has begun reimposing restrictions, such as limits on public gatherings. Critics warn the government waited too long to respond.