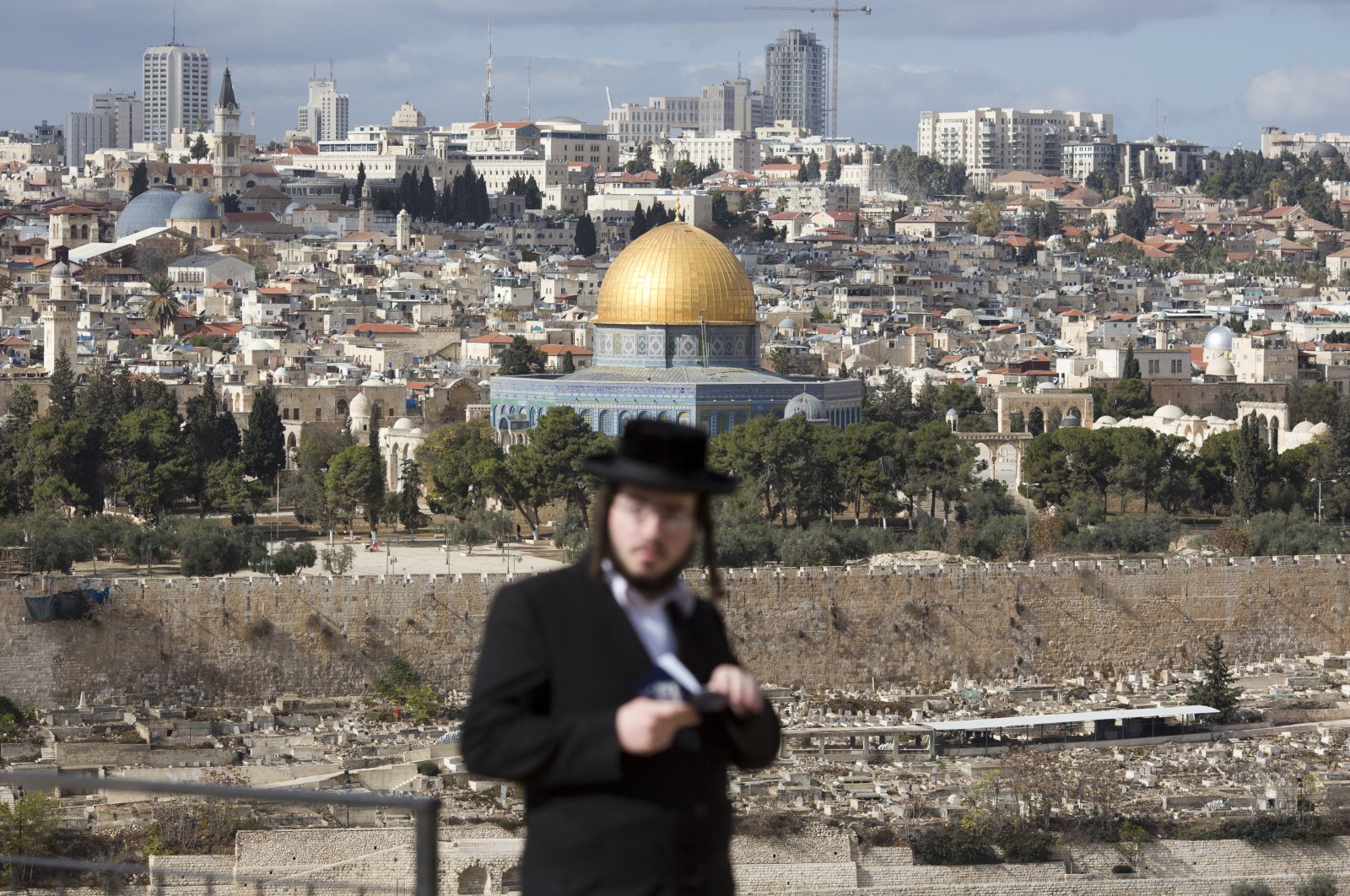 An orthodox Jewish man reads from a holy book in a cemetery near the Dome of the Rock Mosque in the Al Aqsa Mosque compound in Jerusalem's Old City, Thursday, Dec. 7, 2017. (AP Photo)
by Anadolu Agency Jul 28, 2020 4:34 pm
RECOMMENDED

A study published by a High Follow-up Committee for Arab Citizens of Israel Kamal Khatib, revealed that the Israeli authorities have turned 15 mosques into Jewish synagogues.

The study also showed that 40 mosques were either destroyed, closed, or abandoned, while 17 others were turned into barns, bars, restaurants, or museums.

The Ayn Hawd Mosque in Haifa and the upper floor of the al-Siksik Mosque in Jaffa suffered a similar fate.

"After the Nakba, around 539 Palestinian villages were destroyed," Khatib said. "All Palestinian structures, including mosques, have become an easy prey to the Israeli authorities."

Khatib recalled that mosques in the pre-Nakba era were teeming with worshippers. "After the Nakba, however, mosques were destroyed, particularly those in villages. Other mosques were either turned into synagogues, bars, museums, cafes, or restaurants."

Khatib lamented that the Israeli policy "disregards the sentiments of Muslims," citing the al-Isaaf cemetery in Jaffa, where tombs were razed despite protests from local residents.

Khatib said Israeli authorities have enacted legislation to confiscate the property of Palestinians, who fled their homes.

"The Knesset (Israel’s parliament) passed the law of absentees, under which Israel confiscated buildings and property of Arab citizens (who left their homes to move to other areas)," he said.

"The same policy was applied by Israel to numerous mosques and prayer places."

Khatib said Palestinians have made repeated attempts to "regain, renovate and stop assaults on mosques."

"However, all these attempts were rejected by Israel," he said.

Israel denies the accusations of using mosques for other purposes than worshipping.

In October 2015, the Israeli Foreign Ministry said there were around 400 mosques in Israel and that the number of worshippers doubled five times over the past 25 years.

The ministry said that Israeli authorities allocate millions of shekels to build places of worship for Muslims living in Israel. It cited that the government funds more than 100 mosques and pays the salaries of their imams.

Khatib, however, dismisses the Israeli claim, saying "The Israeli government has never built a mosque in the country’s history."

"All the mosques have been built by our people, who collect donations to construct their places of worship," he said.

Khatib continued that not all mosques are registered with the Israeli religious authorities. "The imams of these mosques get their pay from the mosque committees, which collect donations to pay for the requirements of the mosques."

In 1743, the Ottoman-era ruler of Palestine, Zahir al-Umar al-Zaydani, built a mosque in his name in the northern city of Tiberias.

The Umari Mosque remained a magnet point for worshippers until 1948 when it was abandoned following the Nakba, a term used by the Palestinians to describe the creation of the state of Israel on the rubble of Palestine.

One of the landmarks of Tiberias, the mosque, also known as the Zaydani mosque, was built on the Mameluke architecture, with a big dome and a minaret.

"Like most Palestinians, the Tiberias residents have fled to Syria and Lebanon following the Nakba," Khatib told Anadolu Agency.

"The Zaydani family, however, moved to the adjacent city of Nazareth," he said.

Khatib said the Zaydani family had asked the Israeli authorities to permit them to renovate the Umari mosque.

"The Tiberias Municipality, however, refused, arguing that it would renovate it, but nothing happened," he said.

"Even since the mosque has been closed with Israeli authorities banning worshippers and visitors from entering it," he said.