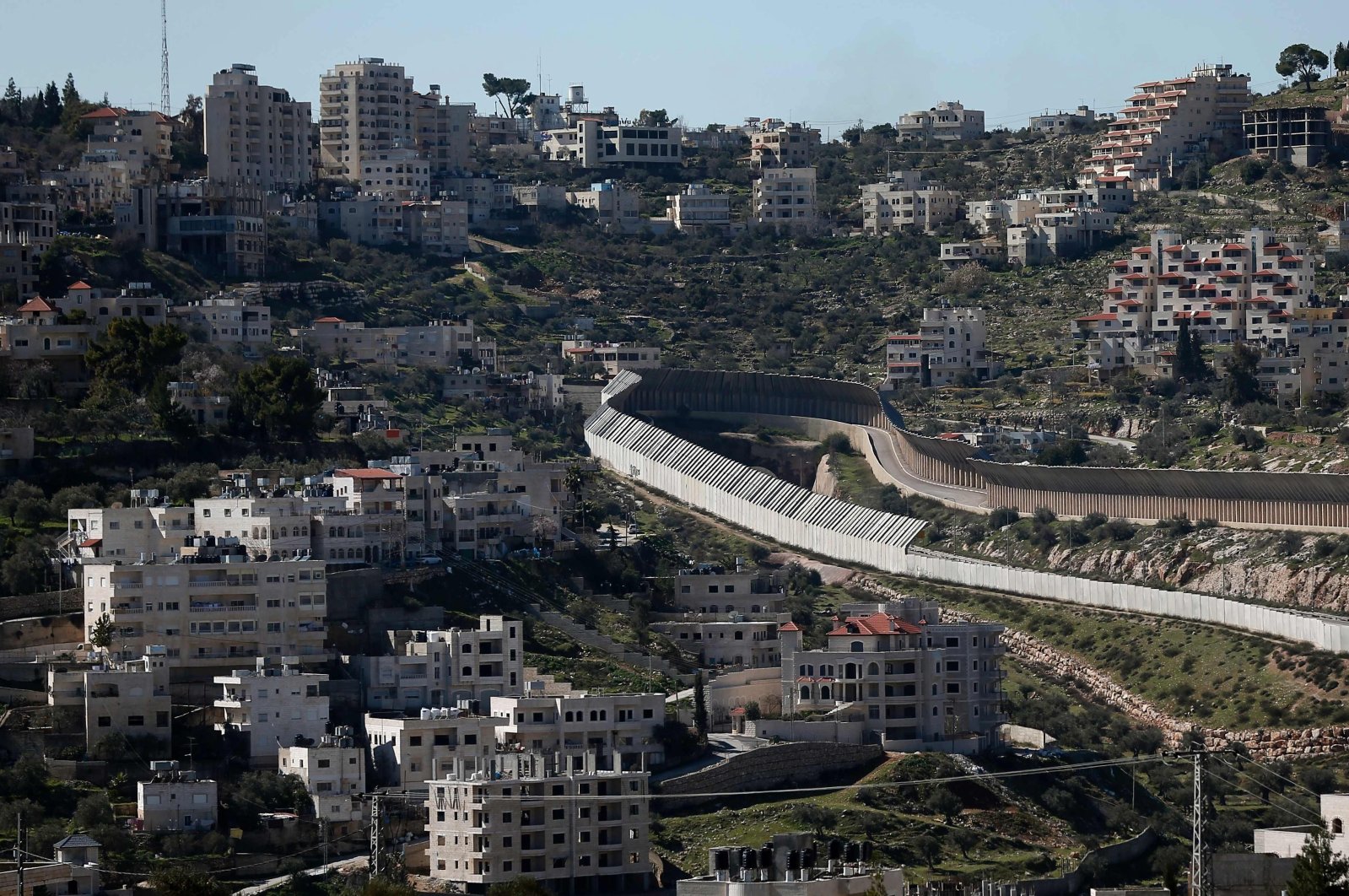 This picture taken from Jerusalem shows the protected road through the West Bank town of Bethlehem leading to the Israeli Gush Etzion settlement block and the West Bank city of Hebron, occupied Palestine, Feb. 12, 2016. (AFP Photo)
by Anadolu Agency Nov 01, 2021 8:36 am
RECOMMENDED

Abed al-Rahman Kittaneh goes through several Israeli military checkpoints in Palestinian cities on his daily journey to Nablus in the occupied West Bank to reach Birzeit University where he works.

The way the cities are divided has taken on a new architectural shape because of Israeli colonial policies. The commute inspired Kittaneh to perform research and projects with his students about the effects of colonialism on the Palestinian architectural environment from different perspectives that connect the present with the past.

Kittaneh, who is an assistant professor in the architecture department at Birzeit University, said the urban sprawl in Ramallah and al-Bireh is controlled and prevented from reaching the eastern areas because of the Psagot settlement that occupies the al-Taweel mountain.

"This resulted in a high architectural density in the southern neighborhoods of the city like Sameramees, Kufr Aqab or on the northern ones like Surda and Al-Balou,” said Kittaneh.

Regarding Nablus, Kittaneh emphasized it is exposing the same policy but with different tools because of the difficult nature of mountainous terrain that obstructs the continuation of the settlement process surrounding the city.

"In Nablus' case, the policy of road constructions lead to the interruption of the geographical connection between Nablus and the surrounding countryside since roads aren’t passing from the rural,” he said, referring to the fact that residents have to go through the mountain to reach the main roads. "The roads that are completely controlled by military forces and full of checkpoints makes moving hard and makes the closure of the whole city a very easy process.”

Kittaneh and his students are working on several projects that study the deep architectural history of Palestine before the British Mandate and Israeli occupation. They search archival documents about details of big city-building projects and how they were managed.

"We are performing several pieces of research about ‘Palestine which does not build’ by analyzing archive documents and the social connotations of architectural development at that time,” he said. "Palestine which does not build” cites the fact that part of Palestinian land was not constructed on because of colonization. The project envisions Palestine if it had not been occupied.

From archival documents, he was able to see that Palestinians were able to participate in building projects by public subscription, such as with electricity companies or salt extraction projects in the Dead Sea, or other projects.

Kittaneh’s students worked on projects regarding the rehabilitation of public facilities such as airports and revitalizing displaced Palestinian villages like Lifta in north Jerusalem and Ain Sokhna, which is near Bissan.

"These revitalizing projects by our students are trying to make a full picture for Palestine that we are dreaming to see free,” he added.

Kittaneh worked on his doctoral thesis on evidence that the old Palestinian cities that have not been reshaped by the occupation have features that help them survive military attacks.

"The architectural infrastructure and its social results helped the Palestinians in Nablus survive during the hard days of military attacks in 2002. The adjacent houses and the internal connections between them in addition to bypass roads played a critical role in the survival of the people,” said Kittaneh.

He emphasized the importance of mentioning the interaction between society and architecture in the city’s history.