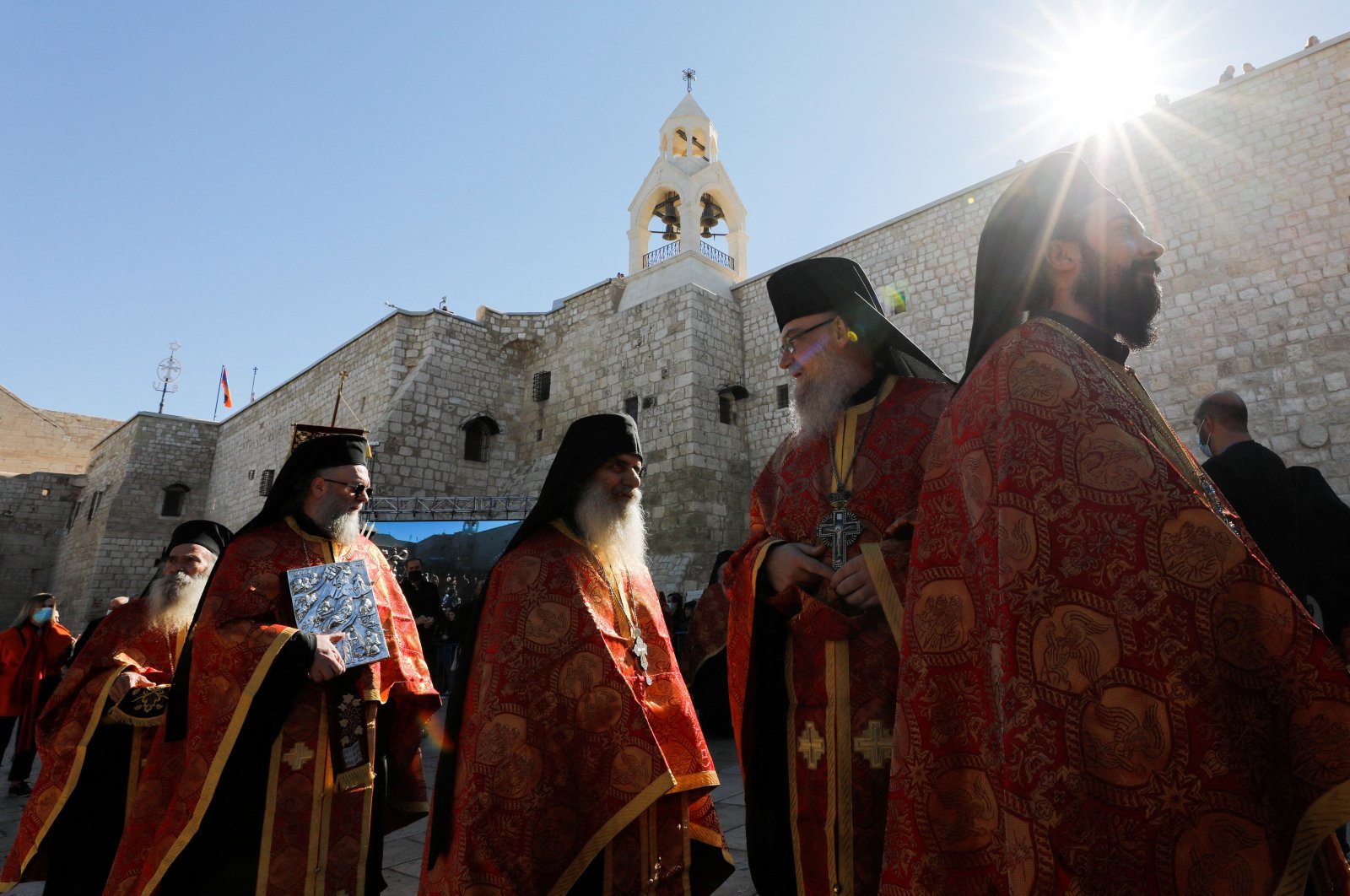 Members of the clergy gather as the Greek Orthodox Patriarch of Jerusalem Theophilos III arrives at the Church of the Nativity to celebrate Christmas according to the Eastern Orthodox calendar, in Bethlehem in the Israeli-occupied West Bank, Palestine, Jan. 6, 2022. (Reuters Photo)
by REUTERS Jan 09, 2022 7:53 pm
RECOMMENDED

Radical Israeli groups have been threatening the presence of Christians in Jerusalem, according to the Greek Orthodox Patriarch of the city.

In a column in the Times of London on Saturday, His Beatitude, Theophilos III, said he believed the aim was to drive the Christian community from Jerusalem's Old City, which has sites sacred to Judaism, Christianity and Islam.

Israel captured East Jerusalem, including the Old City, along with the West Bank and Gaza Strip in a 1967 war. It annexed East Jerusalem after the war in a move that has not won international recognition.

"Our presence in Jerusalem is under threat," the patriarch wrote in the article, published a day after the Greek Orthodox celebration of Christmas.

"Our churches are threatened by Israeli radical fringe groups. At the hands of these Zionist extremists the Christian community in Jerusalem is suffering greatly," he said.

"Our brothers and sisters are the victims of hate crimes. Our churches are regularly desecrated and vandalized. Our clergy are subject to frequent intimidation."

By singling out extremists as Israeli, Theophilos's criticism was more personal and trenchant than that of a collective statement issued by the heads of other churches in Jerusalem before Christmas.

Their statement spoke of "frequent and sustained attacks by fringe radical groups" but stopped short of identifying them as Israeli.

A U.S. State Department report published last year on religious freedom around the world said Christian clergy and pilgrims continued to report instances of ultra-Orthodox Jews in Jerusalem harassing or spitting on them.

Church groups have for some time reported attacks of vandalism at religious sites in the city. Theophilos did not accuse any radical groups by name or cite specific incidents. He did not provide evidence that they were Israeli, or that their goal was to drive Christians from the city.

On Sunday, an Israeli official said the reality on the ground for Christians was completely different from that described by the patriarch, citing a Foreign Ministry statement on Dec. 22 that rebutted the earlier church leaders' claims.

"Since the day it was established, the State of Israel has been committed to freedom of religion and worship for all religions, as well to ensuring the freedom of access to holy sites," the ministry statement said.

"The statement by Church leaders in Jerusalem is particularly infuriating given their silence on the plight of many Christian communities in the Middle East suffering from discrimination and persecution."

In his column, Theophilos said the radicals that he criticized "are not representative of the state of Israel or the Jewish people," and called on Jerusalem to remain a diverse "mosaic community" of Judaism, Christianity and Islam.