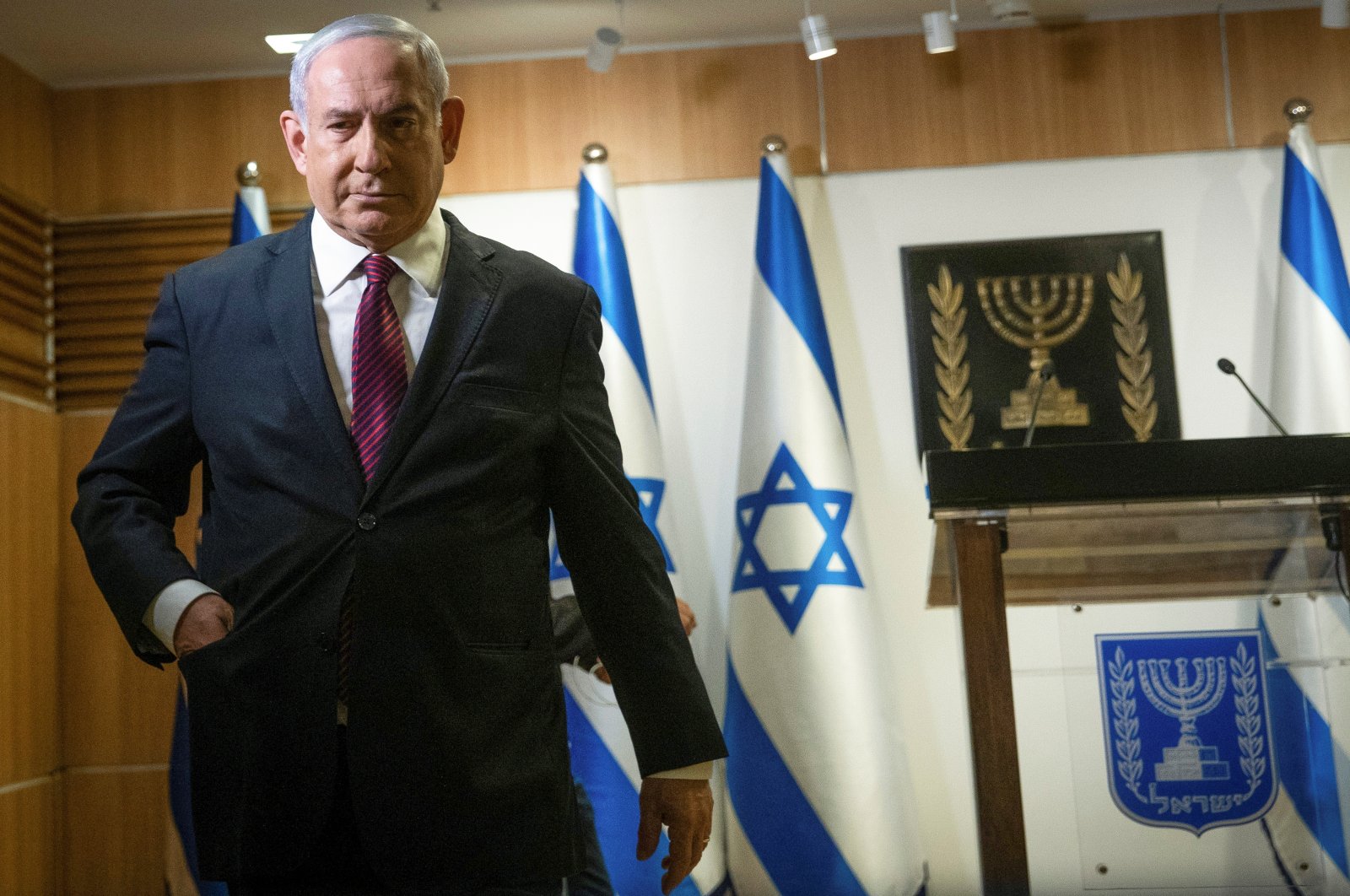 Israeli Prime Minister Benjamin Netanyahu walks after he delivered a statement at the Knesset (Israel's parliament) in Jerusalem, December 22, 2020. (Yonatan Sindel/Pool via Reuters)
by ASSOCIATED PRESS Dec 23, 2020 1:08 am
RECOMMENDED

The Israeli Knesset spokesman’s office confirmed early Wednesday that the country is heading to its fourth elections in two years.

A deadline for parliament to pass a new budget passed at midnight, forcing the Knesset to dissolve and automatically triggering new elections on March 23.

The failure to reach a budget brings about the collapse of Israel’s current government. Prime Minister Benjamin Netanyahu and his main rival, Benny Gantz, formed their coalition in May to take on the challenges of the coronavirus crisis.

Netanyahu, used to labeling his opponents as weak “leftists,” finds himself confronted by a trio of disgruntled former aides who share his hard-line ideology, led by a popular lawmaker who recently broke away from the prime minister's Likud party. Whether Netanyahu can fend off these challengers or not, the country is almost certain to be led by a right-wing politician opposed to concessions to the Palestinians, complicating hopes by the incoming Biden administration to restart peace talks.

The prospects of Israel’s center-left bloc appear worse than in previous contests because its leader, Defense Minister Benny Gantz, entered into an ill-fated alliance with Netanyahu that is now crumbling. Gantz lost the support of much of his base, and the bloc has been left leaderless.

Netanyahu and Gantz formed their coalition last May after battling to a stalemate in three consecutive elections. They said they were putting aside their personal rivalry to form an “emergency” government focused on guiding the country through the health and economic crises caused by the pandemic. Under the deal, Gantz assumed the new role of “alternate prime minister” and was assured he would trade places with Netanyahu next November in a rotation agreement halfway through their term.

The immediate cause of Tuesday’s expected collapse was their failure to pass a budget by a midnight deadline. That would cause the parliament to automatically dissolve and set new elections for late March.

But it really reflected the failure of a partnership plagued by mutual hostility and mistrust from the outset. For seven months, Gantz has suffered a number of humiliations and been kept out of the loop on key decisions, such as a series of U.S.-brokered diplomatic agreements with Arab countries. Netanyahu accuses Gantz's Blue and White party of acting as an “opposition within the government.”

At the heart of this dysfunctional relationship is Netanyahu’s corruption trial. Gantz has accused Netanyahu of undermining their power-sharing deal in hopes of remaining in office throughout his trial, which is to kick into high gear in February when witnesses begin to take the stand. He and other critics believe Netanyahu ultimately hopes to form a new government capable of appointing loyalists who could grant him immunity or dismiss the charges against him.

“A criminal defendant with three indictments is dragging the country to a fourth round of elections,” Blue and White said Tuesday night. “If there wasn't a trial, there would be a budget and there wouldn't be elections.”

Netanyahu is charged with fraud, breach of trust and accepting bribes in a series of scandals in which he is accused of offering favors to powerful media figures in exchange for positive news coverage about him and his family.

“The ongoing political crisis will continue as long as Mr. Netanyahu remains prime minister and no government can be formed without him,” said Yohanan Plesner, a former lawmaker who is president of the Israel Democracy Institute.

“I think it is quite safe to assume that this won’t end until either Mr. Netanyahu is replaced or if he finds a way, through legislation or political maneuvering, to either put his trial on hold or suspend it altogether,” he said.

In the previous three elections, Netanyahu was unable to put together a majority coalition with his traditional religious and nationalist allies. Yet he controlled enough seats to prevent his opponents from cobbling together an alternate coalition.

According to recent opinion polls, that equation appears to be changing, with a number of rivals poised to control a parliamentary majority without him.

Those rivals are led by Gideon Saar, a stalwart in Netanyahu’s Likud who announced this month that he was breaking away and forming a new party. Saar, who once served as Netanyahu’s Cabinet secretary, has accused the prime minister of turning the Likud into a “personality cult” focused on ensuring its leader’s political survival.

If elections were held today, Saar’s party would finish second behind the Likud, giving him a veto over a Netanyahu-led government, according to polls. Saar has vowed he will not serve under Netanyahu.

Naftali Bennett, another former aide who had a falling out with Netanyahu, leads a religious right-wing party that also has surged in the polls. And Avigdor Lieberman, Netanyahu’s former chief of staff and a longtime Cabinet minister, also says the prime minister is unfit to lead.

All of these rivalries are more personal than ideological, meaning that Israel’s next government — led by Netanyahu or not — almost certainly will have a right-wing ideology that opposes Palestinian independence and supports continued Israeli settlement construction in the occupied West Bank.

The recent polls indicate that Gantz, who appealed to left-wing voters in previous elections, may not receive enough votes to even enter the next Knesset.

Yair Lapid, leader of the centrist Yesh Atid party, appears to be gaining some of those voters, but not enough to lead the next government, according to the polls. The left-wing Labor Party, which established Israel and led the country for its first 30 years, is not expected to cross the threshold, while the far-left Meretz party is expected to barely scrape in.

The Arab-majority Joint List has been plagued by infighting, and it is unclear whether any mainstream party is ready to share power with them. An Arab-led party has never been part of an Israeli government.

In a televised address Tuesday night, Netanyahu turned to his standard playbook, blaming Blue and White for the political breakdown and saying any of his challengers would have to rely on “the left” to form a government without him.

"We are against elections; this is a wrong decision by Blue and White," Netanyahu said. “But if elections are forced upon us, I promise you we will win.”

Despite the bold predictions, Netanyahu will have other factors working against him. In the previous elections, he used his close alliance with President Donald Trump as an electoral asset.

That option will no longer be there after Joe Biden is sworn in as president on Jan. 20. Biden is expected to return to the policies of his former boss, President Barack Obama, who had a stormy relationship with Netanyahu over his treatment of the Palestinians.

Netanyahu also must face the voters over his handling of the coronavirus crisis. Netanyahu scored an achievement this week by making Israel one of the first countries in the world to begin vaccinating its population.

But it remains unclear how many people will be vaccinated by March. And with Israel facing a raging outbreak and the possibility of a third lockdown, angry voters could still punish him for the economic damage caused by the pandemic.