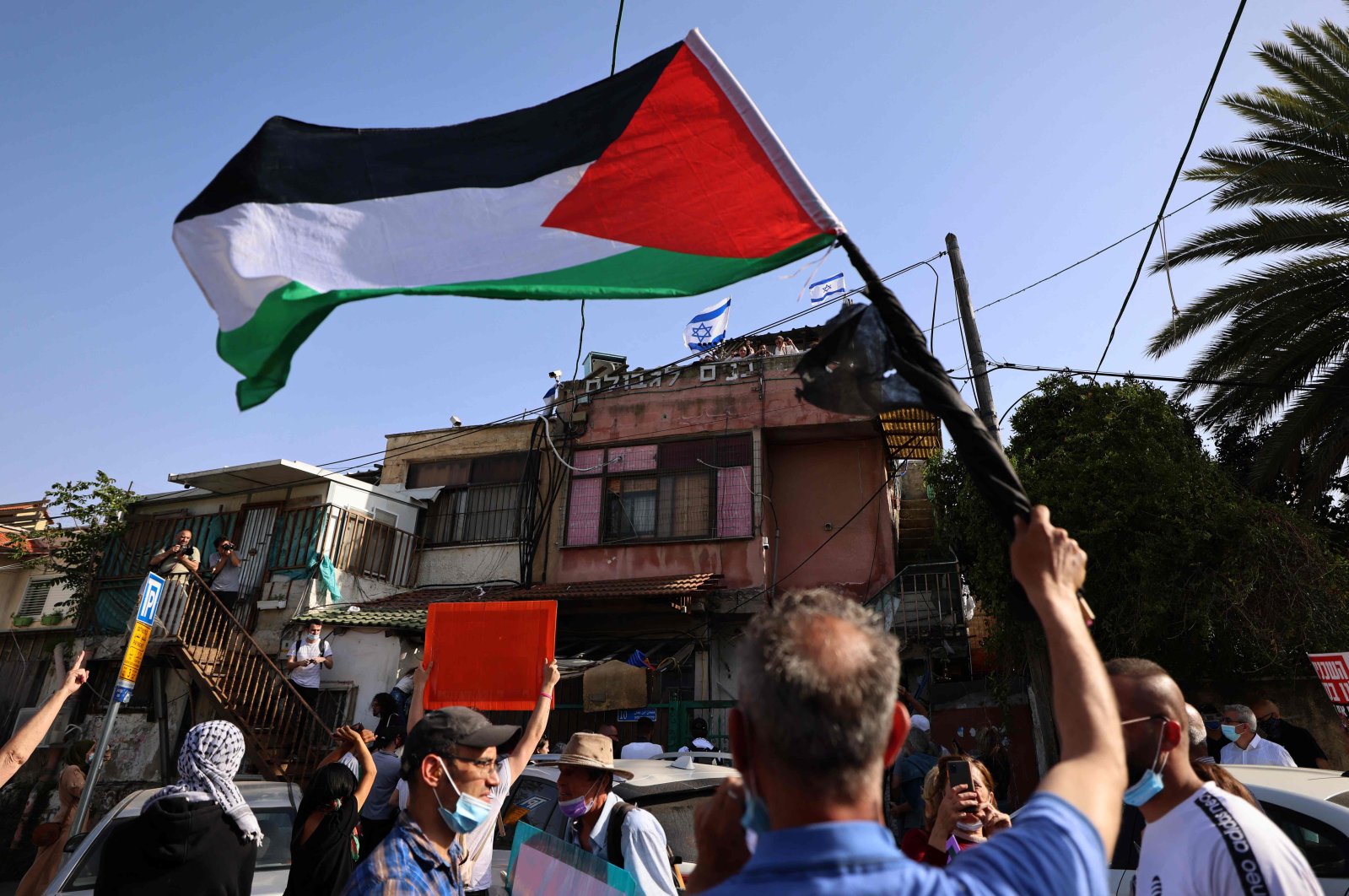 Palestinian and Israeli activists gather in front of Israeli settlers' houses during a demonstration against the expulsion of Palestinian families from their homes, in the Palestinian neighbourhood of Sheikh Jarrah in Israeli-annexed East Jerusalem, April 16, 2021. (AFP Photo)
by Agencies May 04, 2021 2:23 pm
RECOMMENDED

Several Palestinians were injured and others were arrested by Israeli security forces during clashes in occupied East Jerusalem that were part of a solidarity demonstration with the residents of the Sheikh Jarrah neighborhood, according to an aid agency.

Three of the injured Palestinians, among at least 10 in total, were hospitalized, the Palestine Red Crescent said Monday.

Eyewitnesses in the region told Anadolu Agency (AA) that Israeli forces sprayed skunk water, a nonlethal weapon used for crowd control, into the houses of Palestinians in the neighborhood, while illegal settlers attacked the residents. An Agence France-Presse (AFP) reporter saw Palestinians singing songs and defying the order to disperse. Officers dispersed the demonstration using mounted police and skunk water.

The eyewitnesses also said that the Israeli police detained at least two of the Palestinians involved in the solidarity demonstration.

Sheikh Jarrah is in East Jerusalem, which Israel conquered in 1967 and annexed in a move not recognized by most of the international community.

Since 1956, a total of 37 Palestinian families have been living in 27 homes in the neighborhood.

Israeli Jews backed by courts have taken over houses in Sheikh Jarrah on the grounds that Jewish families lived there before fleeing in Israel's 1948 war for independence. No such protection exists for Palestinians who lost their land.

Now Jewish claimants seek to evict a total of 58 more Palestinians, according to the watchdog group Peace Now. Israel's Supreme Court is set to announce a decision for four of those families on Thursday.

Jordan has intervened, saying that when it administered the area from 1948 to 1967, it built the homes for Palestinian refugees who fled their homes in what became Israel.

Opponents of the evictions have gathered regularly in the neighborhood, including a Jewish Israeli lawmaker who last month was filmed being beaten by police.

Sheikh Jarrah is a short walk from the Old City's Damascus Gate, a plaza popular with Palestinians, especially during the fasting month of Ramadan.

The latest protests follow days of clashes after Israeli police blocked the plaza.

Residents of another part of Palestine found themselves displaced to Gaza Strip and the West Bank amid rising attacks by Zionist gangs to pave the way for the creation of the state of Israel.

Palestinians use "nakba" in Arabic, or "The Catastrophe," to refer to the 1948 expulsions by Zionist gangs.

The Palestine-Israel conflict dates to 1917 when the British government, in the now-famous Balfour Declaration, called for "the establishment in Palestine of a national home for the Jewish people."