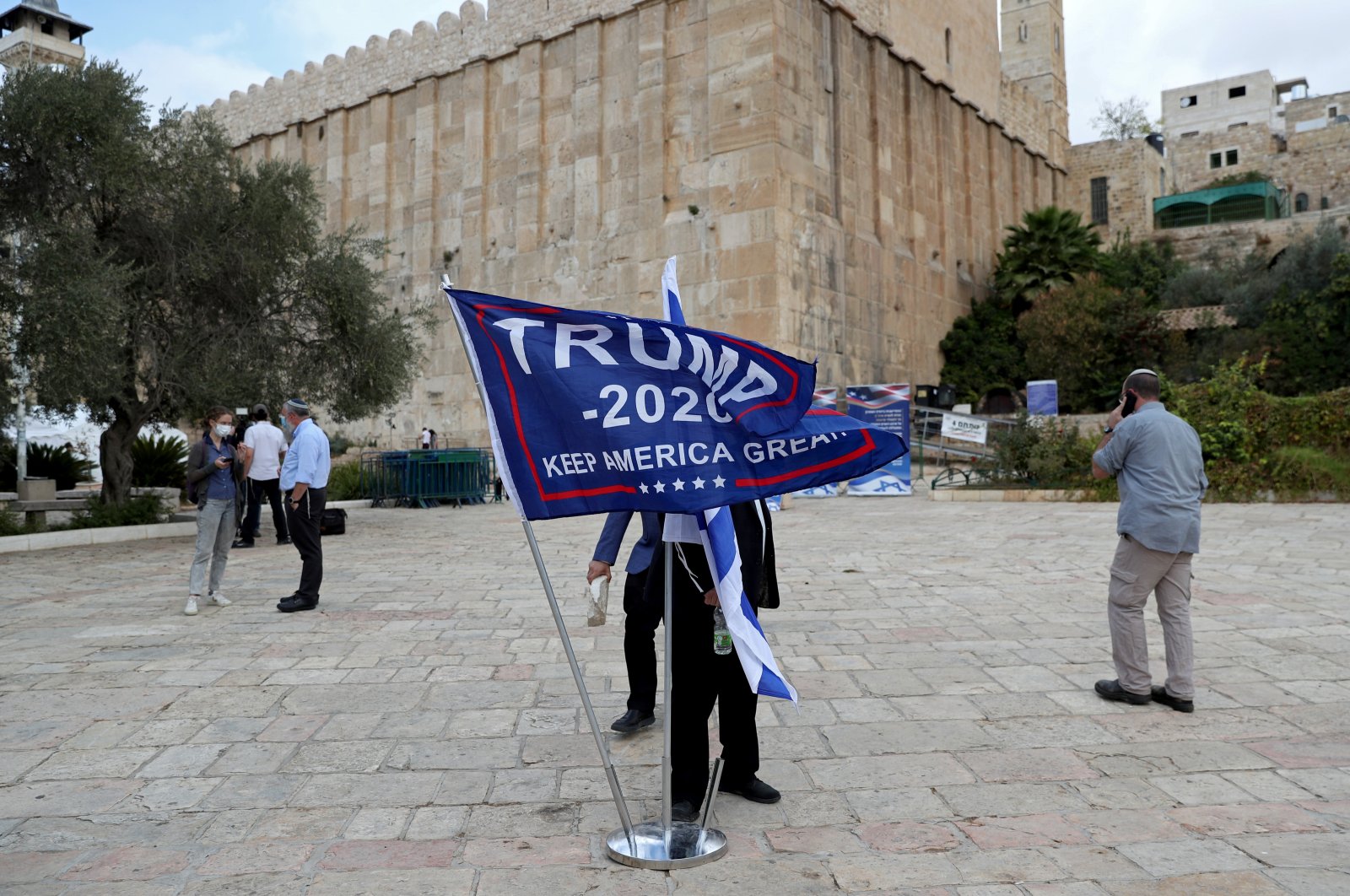 An Israeli settler adjusts a flag during a gathering to show support for U.S. President Donald Trump in the Israeli-occupied West Bank, Palestine, Nov. 2, 2020. (Reuters Photo)
by Agencies
Nov 02, 2020 4:14 pm

Jewish settler leaders prayed on Monday for U.S. President Donald Trump's reelection, citing his support for Israel, during a ceremony at a biblical tomb in the occupied West Bank that has been a flashpoint of conflict with Palestinians.

"We have come to bless President Trump, both for the past, to thank him, but also for the future, that he succeeds in the coming election," Yishai Fleisher, spokesman for the Hebron settlers, said at the Cave of the Patriarchs burial site.

Trump, a Republican running against Democratic former Vice President Joe Biden in Tuesday's election, has been shunned by Palestinians for perceived bias since he broke with global consensus by recognizing Jerusalem as the Israeli capital and moving the U.S. embassy there.

His administration has also softened U.S. disapproval of Israel's settlements on land where the Palestinians want to establish a state, and which most world powers deem illegal.

A rabbi officiating at Monday's ceremony prayed for God to secure Trump "four more years," citing the president's "commitment to the preservation and strengthening of the people of Israel, the state of Israel and the land of Israel."

Also on Monday, religious Zionist newspaper Makor Rishon published a letter by six rabbis, urging voters "who care about the state of Israel" to support Trump.

Referring to Trump's 2018 withdrawal from the 2015 nuclear deal with Iran, the rabbis warned that Biden "has declared that he would reinstate this dangerous agreement with Iran."

Biden has signaled that he would be ready, under certain conditions, to reenter the Iran nuclear deal. Trump has also spoken of swiftly entering a new deal with Iran, if reelected.

During his time in office, Trump also formally recognized Israeli sovereignty over the Golan Heights, which were annexed by Israel in 1981 but not recognized internationally.

Prime Minister Benjamin Netanyahu has said that "Israel has never had a better friend" than Trump.