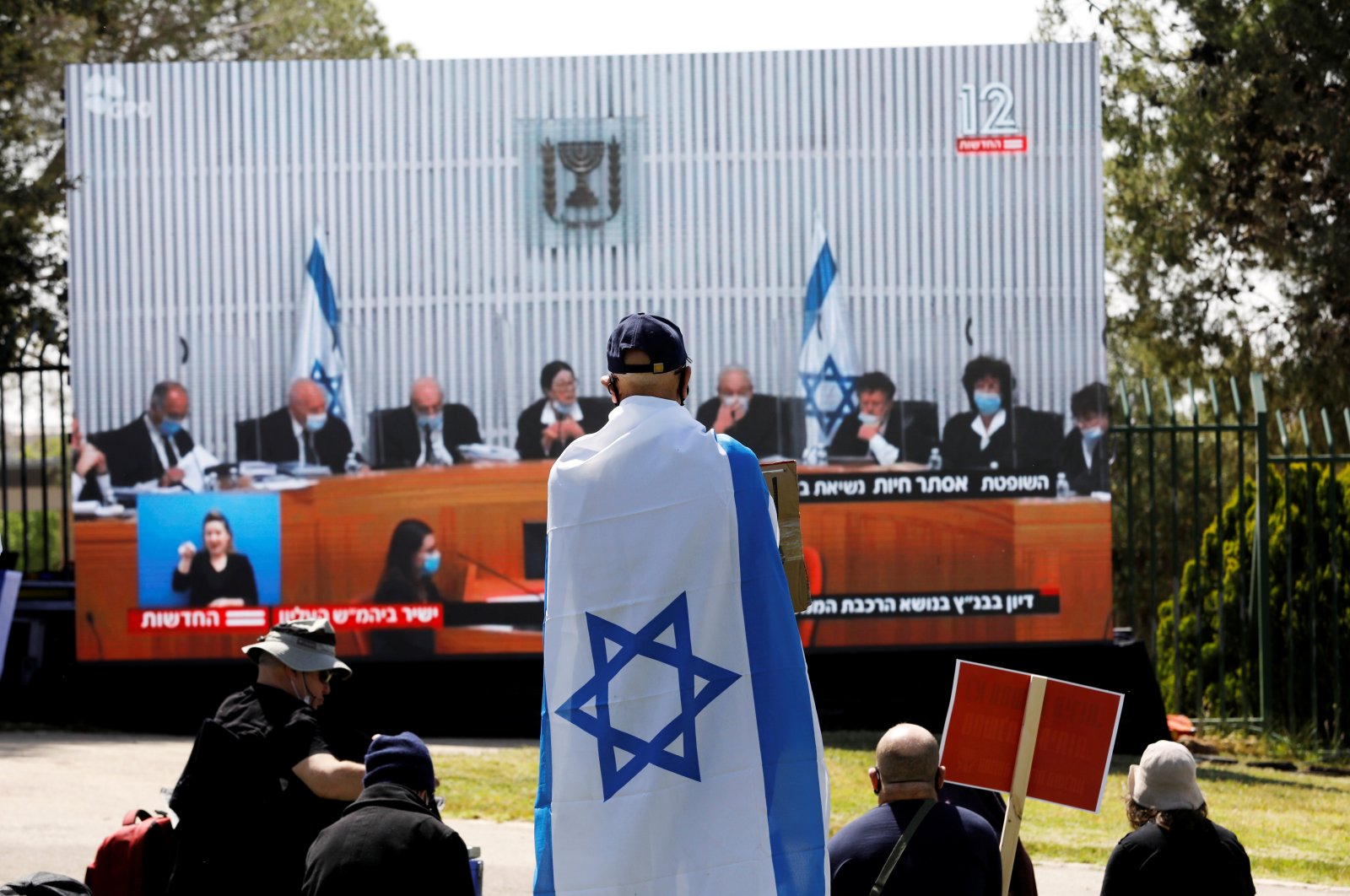 Israelis protest, in front of a placard with the photo of the High Court judges outside the Knesset against Prime minister Benjamin Netanyahu in Jerusalem, May 3, 2020. (Reuters Photo)
by ASSOCIATED PRESS
May 03, 2020 11:45 am

The proceedings, held by an exceptionally large panel of 11 justices and in a rare instance also broadcast live, are focusing on the issue of whether a politician can form a government while under indictment – something the Israeli legal code does not explicitly prohibit.

If the court voids Netanyahu’s ability to serve as prime minister, Israel could be plunged into political chaos, and it would likely trigger the country’s fourth consecutive election in just over 12 months.

The high court has become a lightning rod for criticism by Netanyahu and his political allies, who accuse it of overreach and political interference, while the long-time leader's opponents consider it a bastion of democracy under dangerous assault.

Pro-democracy demonstrators have been taking to the streets weekly to protest Netanyahu's continued rule. Last week, counter-protesters against the court demonstrated against its hearing the petitions against Netanyahu's rule.

In an exceptional move, Sunday’s hearing was broadcast live on the high court’s website while most of the country remains under coronavirus movement restrictions. The judges, attorneys and clerks wore face masks, and plastic barriers separated each of the 11 justices on the bench.

Netanyahu was indicted earlier this year on charges of accepting bribes, fraud and breach of trust. He has denied any wrongdoing. His trial was postponed due to restrictions his hand-picked interim justice minister placed on the courts after the coronavirus crisis erupted and is scheduled to commence later this month.

Last week, Israel’s attorney general, Avichai Mandelblit, said in an opinion to the court that while Netanyahu's indictments "raise significant problems,” there was no legal basis for barring him from serving while facing criminal charges.

Israeli law mandates that Cabinet ministers and mayors resign if indicted, but prime ministers are not specifically required to step down. In January, the Supreme Court declined to rule on whether Netanyahu could form a government under indictment, saying the matter remained "theoretical” ahead of March’s elections.

Netanyahu and Gantz signed the agreement to form a national government last month after Israel's third consecutive, deadlocked election in just over a year. The deal would have Netanyahu serve the first 18 months as prime minister, after which Gantz would assume power for the next 18 months.

The petitions against Netanyahu were filed by advocacy groups that have asked the high court to ban any indicted politician, including Netanyahu, from being allowed to form a new government. They also say that parts of the coalition deal are illegal.

Eliad Shraga, head of the Movement for Quality Government in Israel, one of the groups petitioning the court, said in a statement ahead of Sunday's proceedings that it was "unconscionable that a man like this will go in the morning to court to sit in the dock and in the evening will manage the security cabinet and send us and our children to battle.”

Netanyahu, Israel's longest serving prime minister, has held onto power as a caretaker leader for more than a year as political stalemate prevented the creation of a government and triggered successive elections.