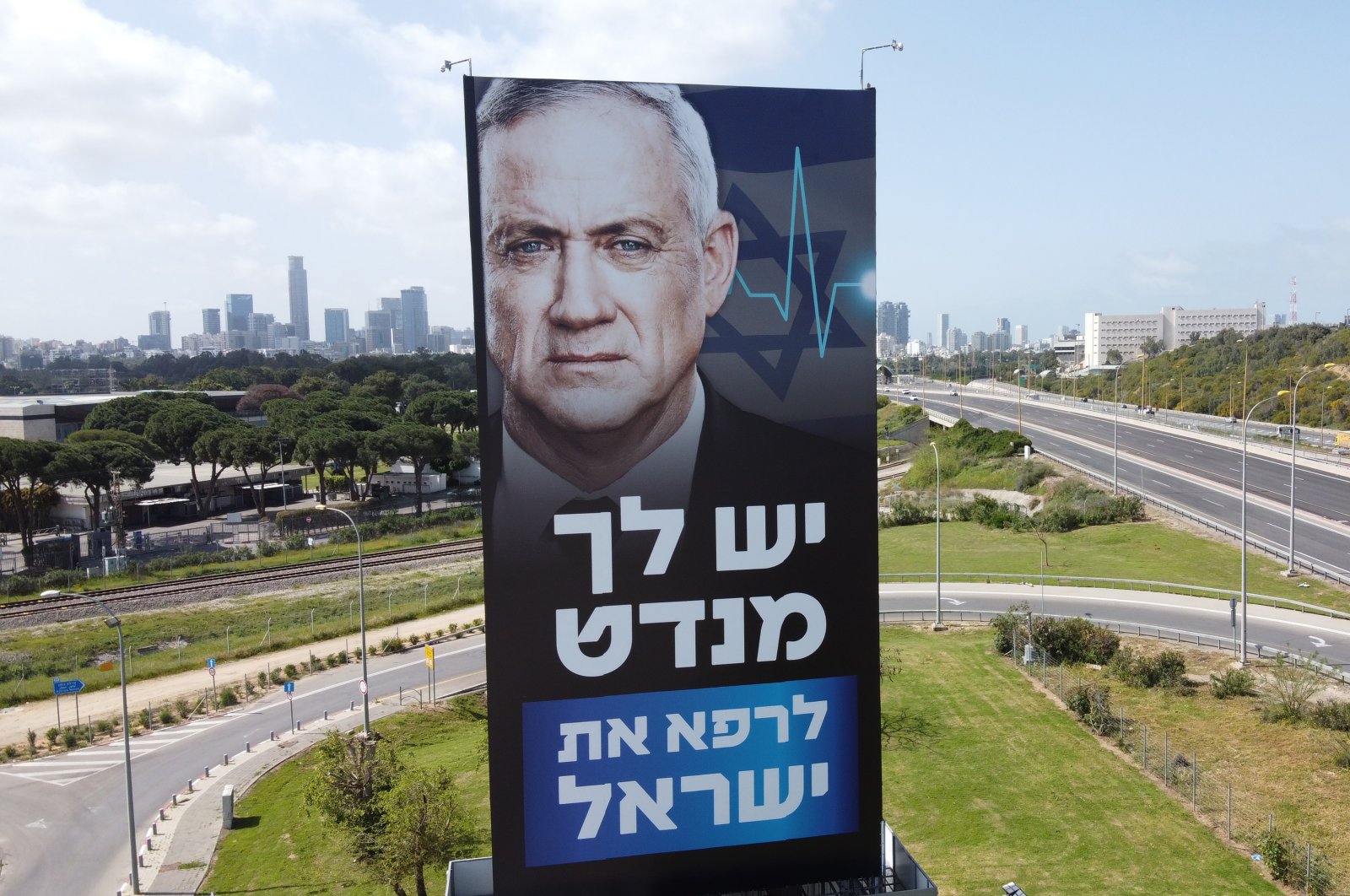 A billboard shows Israeli parliament speaker Benny Gantz on a mostly empty freeway because of the coronavirus in Tel Aviv, Israel, Sunday, March 29, 2020. The Hebrew writing says you have a mandate to heal Israel. (AP Photo)
by Yusuf Selman İnanç Mar 30, 2020 2:50 pm

While prominent Israeli leaders failed to form a government after the third elections, held in a year, the political disputes have spread to the opposition, leading two parties to leave the alliance

Following the decision of the main opposition alliance Blue and White’s leader Benny Gantz to join an emergency government formed by Prime Minister Benjamin Netanyahu, the alliance has disintegrated. Two party leaders decided to abandon the alliance on the grounds that any coalition with Netanyahu would undermine their political situation. In this way, Gantz has only 15 seats in the 120-seat Knesset, the Israeli parliament.

Israel has held three elections within one year, yet the political deadlock has not been solved. On the contrary, the disputes have been deepening. On the one hand, there are corruption charges lodged at Netanyahu, who overcame the leadership challenge in the Likud Party once again, this time despite the ongoing corruption allegations against him. While he is being accused of fraud, bribery and other illegal activities, Netanyahu considers regaining the prime ministry post an important step for securing himself. In September's national elections, Netanyahu – Israel's longest-serving prime minister – failed to secure the majority seats in the Knesset. Since his party has failed to reach an understanding on a coalition, Israel has been plunged into one of the worst political deadlocks in its history. On the other hand, the opposition fails to secure enough seats in the Knesset for forming a government or to convince other small parties to join an alliance. In the latest developments, the opposition has been dismantled.

Gantz has been leading the opposition parties, including Yesh Atid and Telem, whose leaders decided to leave the alliance. Gantz was expected to form a strong centrist alliance against Netanyahu and his right-wing allies. Until last week, Gantz has been underlining that he would not serve under a prime minister, who is accused of corruption. However, he changed his mind, saying that Israel would not put up with a fourth election in the event of the coronavirus outbreak. On Saturday night, Netanyahu and Gantz held a meeting. By the end of the meeting, they released a statement. The statement read “(the talks) aimed at establishing a national emergency government to deal with the corona crisis and the additional challenges facing the State of Israel. Significant progress was made during the meeting. During the course of the day, an additional meeting will be held in order to come to a finalized agreement.”

In fact, Gantz has been tasked with forming a government two times. But he failed to do so each time. Amid the deadlock, Gantz refused to sit with the Arab parties or to ally with far-right parties. This time, it was unexpected that he would manage to convince other parties to join his alliance for forming a government. Similarly, Netanyahu has so far failed to secure support from other small parties or independent lawmakers.