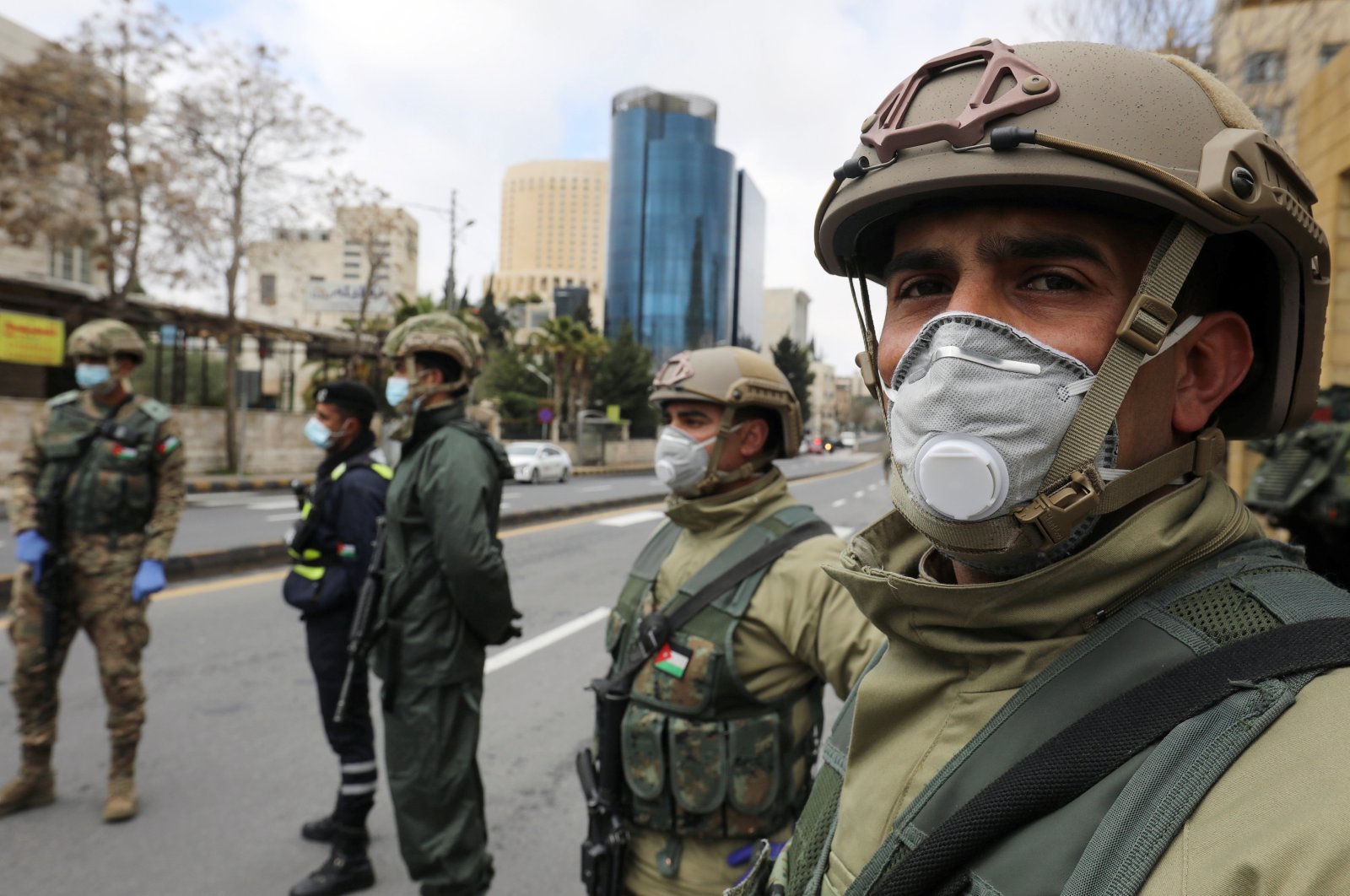 Jordanian army members stand guard at a check point after the start of a nationwide curfew, amid concerns over the coronavirus disease (COVID-19) spread, in Amman, Jordan March 21. (Reuters Photo)
by AP Mar 21, 2020 2:52 pm
RECOMMENDED

Air raid sirens echoed across Jordan's capital on Saturday to mark the start of a three-day curfew, the latest mass lockdown in the Middle East aimed at containing the coronavirus, which has claimed another 123 lives in Iran, home to the region's worst outbreak.

In one of the strictest measures yet, Jordan has ordered all shops to close and all people to stay off the streets until at least Tuesday when it plans to announce specific times for shopping. Anyone caught violating the curfew faces up to one year in prison.

Iran has not ordered businesses to close, though many have done so on their own. Authorities only began closing popular religious pilgrimage sites earlier this week, long after the first virus cases were detected. There are concerns the country's healthcare infrastructure, weakened by severe U.S. sanctions, could be overwhelmed.

Most people only experience minor flu-like symptoms from the coronavirus and recover within a few weeks, but the virus is highly contagious and can be spread by those who appear well. It can cause severe illness, including pneumonia, in some patients, particularly the elderly and those with underlying health problems.

Several countries in the Middle East have closed schools, universities and nonessential businesses. Many are threatening fines or jail time to those caught violating the decrees.

Saturday is Mother's Day in the Middle East, and many took to social media to lament the fact that they would not be able to visit family members.

Iraq, which has reported 193 cases and 14 deaths, has struggled to maintain a weeklong curfew in Baghdad as religious pilgrims have continued to try to visit a major Shiite Muslim shrine in the capital.

The tiny, energy-rich nation of Qatar is warning citizens and residents to honor home quarantine rules. The state-run Qatar News Agency said authorities “captured 10 people” who broke the rules. It said those who disobey the orders could face prosecution.

In the Israeli-occupied West Bank, Palestinian security forces arrested 20 Muslim preachers for allegedly violating a ban on holding Friday prayers, the Voice of Palestine reported. The Palestinian Authority, which governs parts of the West Bank, has closed mosques and barred all group prayers.

Abdallah Kmail, the governor of Salfit, said a village in the northern West Bank was locked down after a man who returned from Pakistan and tested positive for the virus participated in prayers held in violation of the ban. The man was an adherent of Salafism, an ultra-conservative interpretation of Islam, Kmail told the Voice of Palestine.

The governor said 250 people from the village of Qarawa Bani Hassan will be tested Saturday.

In Egypt, which has reported 285 cases and eight deaths, there are growing calls for a more general lockdown.